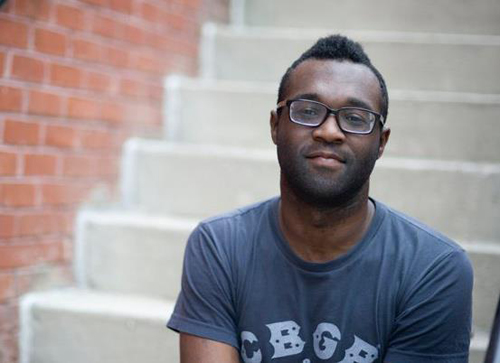 Donté Smith is a member of the AIDS Foundation of Chicago Americorps team.

At times, hip-hop lovers who also believe in social justice can grow discouraged by the homophobia and misogyny so rampant in today’s brand of beats and rhymes.

But tomorrow night, there will be a refreshing showcase of hip-hop talent performing for a most worthy cause: to enhance the lives of people living with HIV at the Bettendorf Place, a new home for the homeless on Chicago’s South Side.

“This event is important to Bettendorf Place because, as a newly-built facility, it’s crucial that they are supported in the work that they're doing,” said Donté Smith, a member of the AIDS Foundation of Chicago (AFC) AmeriCorps team organizing the event.

Local hip-hop acts such as the Redline Villains, the Tomorrow Kings, Kris DeLaRash and Mad Mary will be performing tomorrow night at the MultiKulti/Quennect4 gallery in Wicker Park from 7 p.m. to 1 a.m. There will also be live graffiti art and break-dancing. Donations benefit the Bettenforf Place, the Alexian Brothers AIDS Ministry’s new residence for people with disabilities on the South Side.

Members of AFC’s AmeriCorps team are placed throughout the city at different agencies. Smith, 25, is a HIV prevention specialist with the Heartland Alliance. The Houston, Texas native is no stranger to advocacy and social justice work. And his work in HIV prevention is a very personal calling: He’s lived with HIV since 2009.

Smith took a few minutes to answer Inside Story’s questions on his background, his passion for HIV/AIDS work and the project at the Bettendorf Place. What follows is an edited transcript of that exchange.

Inside Story: How have you been affected by HIV in your life?

Donté Smith: As a black queer (or MSM — men who have sex with men — as the epidemiologists would label me), my communities have the highest HIV prevalence rates in the country and account for the higher numbers of new infections.  HIV has affected my life intimately, as well as my family.

Since 2009, I've been living with HIV. I've lost family members to AIDS-related complications, and at the age of 13 during the early years of the epidemic, the first out queer people in my life were a group of my male relatives who were forced out the closet by HIV.  It took only a series of unexpected accidents (a random car crash, mysterious eye infection, and a suddenly sick lover) to spur these men to be open about their lives, sexualities and statuses with the rest of my family.

IS: How did you come to work for AmeriCorps?

DS: I came to this work from a social justice background.  From Gay Straight Alliance organizing in my high school in Texas, to labor organizing with campus workers in college, to anti-militarism, anti-war activism & queer/transgendered liberation organizing post-college — I've been lucky to be able to find radical communities in a variety of movements that are struggling for progressive change.

Being diagnosed with HIV in 2009 was a (re)radicalizing experience for me, spurring me to alter the trajectory of my activism towards HIV/AIDS.  Since then, I've attempted to be a force for HIV prevention and reproductive justice.  I joined the AmeriCorps AIDS United program because it was a continuation of that community service and community organizing that has always been important to me.

IS: What do you do with AmeriCorps?

DS: We all began our assignments in September and we're all doing HIV testing and counseling at agencies across the city.  At Heartland Alliance, I'm a HIV prevention specialist working with Black MSM who experience homelessness, which means I do a little bit of everything … HIV testing and counseling, conducting HIV and sexual health workshops, and coordinating outreach efforts.

IS: What’s the idea for the Bettendorf Place project?

DS: So, a crucial part of our Americorps assignments this year is that we complete a long-term project that affects and benefits the lives of people living with HIV. We decided that we wanted to do something that was physical and that would benefit the residents of a HIV-related housing organization — something tangible that we could see and touch that was proof of all the work we've done.

After a little research we discovered Bettendorf Place, which is the Alexian Brother's AIDS Ministry's first South Side housing facility. For us it was really important to focus our long-term project on the South Side as a way of addressing the disparity in resources between the North and South Sides of the city.  We started working with Bettendorf in January.

IS: You guys have quite a lineup for tomorrow night. How did this benefit show come together?

This benefit came through our planning process as a team. We wanted to have an event to raise awareness about the work that we were doing and make some money for our project of beautifying Bettendorf.

Further, study after study has shown that social and emotional well-being is critical to living healthy with HIV. Simply put, the support of friends and peers reduces stress, encourages a positive outlook on life and motivates individuals to look after their health.

While this project is simple and small scale, providing and beautifying an outdoor community space is the first step to creating a supportive space for residents served by Alexian Brothers.  Also, providing bikes to Bettendorf Place means granting residents the self-sufficiency to travel and move freely.

Recruiting artists and booking the show was an insane experience. It took months to recruit and find all the artists for the show.  Some of the artists were friends I knew. Some were friends of friends and some I recruited through a desperate moment of anxiety on social media websites.  This event is exciting because it shows how communities of artists can come together for a good cause.

If you're interested in helping support this project and the Bettendorf project, come out to the hip-hop and spoken word event "Rhythm, Rhymes & Beats" at MultiKulti/Quennect 4 gallery at 1000 N. Milwaukee Ave., on Friday, March 30th 7 p.m. -1 a.m., or donate online here.

And keep up with AFC's AmeriCorps team on Facebook. 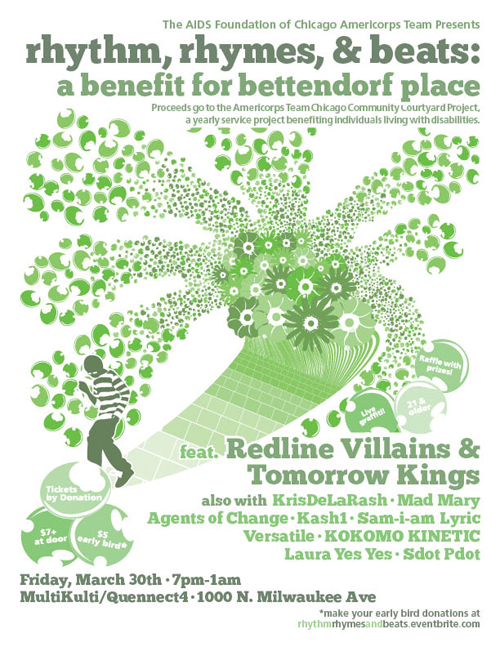