Rooted in the Cause 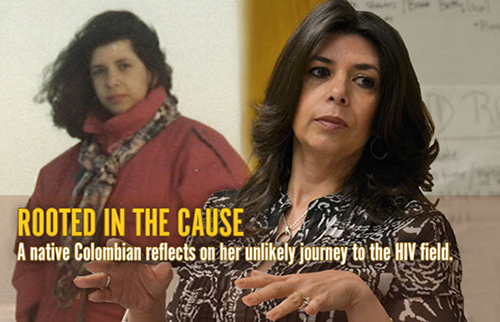 Bombings and the constant threat of political violence made the choice for her.

Gilliland’s path has led her from the dangers of drug violence in Colombia to a long career in the HIV case management field. She fell into her career almost by happenstance but has stuck with it for 20 years out of a passion forged from the early painful losses of clients in the 1990s and the progress she’s seen since.

Today, Gilliland trains case managers in the Northeastern Illinois HIV/AIDS Cooperative, managed by the AIDS Foundation of Chicago (AFC), which oversees case management for more than 5,000 people per year who are living with HIV in the Chicago area and collar counties. Her daily goal is to make sure all clients receive the same quality of case management, regardless of what neighborhood they live in.

“The clients are going to get from you, what you know is available,” said Gilliland, 48. “My responsibility is with the case managers, but by helping them, I’m helping the clients.”

Hard to believe she didn’t know anything about HIV, or even how to speak English fluently, when her family moved to Chicago in 1991.

In 1989, the political situation in Bogota was extremely volatile, as Pablo Escobar and Medellin drug cartel used bullets and car bombs to terrorize civilians and government officials.

Her mother, Maria Oliveros, was working for the government, in daily proximity to sensitive documents relevant to drug trafficking; her father, Oscar Oliveros, worked in the food manufacturing industry.

Two years prior to their move, a bomb detonated near the Oliveros household, shattering their windows.

Gilliland, then 25, had been working while going to college for speech pathology and otherwise enjoying a comfortable upper-middle class life in Bogota, the capital city of Colombia. But the life-threatening violence was close and constant enough to prompt a life-changing decision: The Oliveros family was moving to America.

Iliana Gilliland in Bogota in 1990.

Gilliland’s father and brother moved to the United States to pave the way for the rest of the family. In 1991, Gilliland, her younger brother and her mother joined them.

“I was forced to leave. I was very happy. I had my life in place, working, going to school,” she said. “I moved to a place where I didn’t know anything about anything. It was really hard.”

It would be 16 years before she returned to Colombia.

Gilliland slid into depression as she grappled with not knowing the English language and having no immediate career prospects.

She enrolled in English classes at Truman College, where she met a kindred soul in a Venezuelan physician named Ricardo Rivero. Together, they commiserated about working humbling odd jobs like washing dishes and babysitting after enjoying a higher level of comfort in their home countries.

As fate would have it, Rivero learned the Red Cross was giving a free class on HIV community education in Spanish. They both took the class and began giving public presentations.

“We were going through the same process,” said Rivero, who now works for the Midwest AIDS Training and Education Center. “We’ve both grown so much since then and I’d like think we’ve both contributed so much to the epidemic in a good way.”

Another door opened later in 1992, when Gilliland took a job translating the directory of HIV services in Chicago, from English to Spanish. She continued translating for a now-shuttered South Side organization called Rally for Life, where she would eventually become a case manager.

It was difficult for her parents, who knew little about HIV/AIDS but worried their daughter was unnecessarily exposing herself to risks. Around Christmas, she took her father to see one of her clients. Her father intended to make a holiday donation to the man. But he was not prepared for what he saw.

“The client was having sarcoma carposi, so he had really big marks all over his body. My father was really shocked by the way he looked,” Gilliland said. “He said ‘I cannot believe you are doing this.’ ”

It was a turning point.

“He saw me holding (the client’s) hand, giving him a hug,” Gilliland said. “He saw me consoling the client. He understood then I was not at any risk. I was helping people.”

"It's impossible to feel burnt out because we're exposed to new challenges every day."

Case management was then very different, of course. It was helping clients live their final days with some measure of peace and comfort. The job meant attending funerals regularly and helping families through the process.

Gilliland was deeply moved by those she helped. One Latina woman in her 50s became infected with HIV after a lifetime of taking care of her children as a single mother. It only took one sexual encounter.

“I realized then it could happen to anyone,” Gilliland said.

Another client was a 22-year-old woman who was determined to have a baby and experience motherhood, if only for a short while. Gilliland warned her that her baby could be born HIV-positive. She had the baby, who was born HIV-negative, and she died a year later.

“The discrimination, all the issues that were involved, I felt like I really needed to do something to help people with HIV,” Gilliland said. “It really touched my heart.”

In time she moved on to the Erie Family Health Center, where she met Roman Buenrostro, who now works at AFC as director of special projects.

“(Iliana) always had a real compassion for the clients,” Buenrostro said, “and now that compassion comes out for the case managers, too.”

At Buenrostro’s urging, in 2000, Gilliland came to work for AFC. Though she was reluctant to leave direct contact with clients, her work with case managers has given her the opportunity to have a larger-scale impact on the case management system.

“It’s impossible to feel burnt out because we’re exposed to new challenges every day, changes in systems, changes in medicine, changes in funding,” she said. “I’m always learning.” 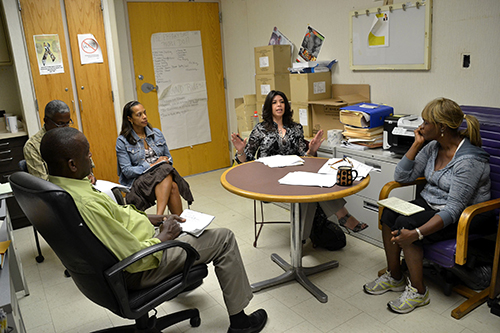 Last year, AFC held 88 trainings for case managers in Chicago and the collar counties – a point of pride for Gilliland. The trainings provide case managers a place to be among their peers and share their challenges, she said, as well as receive updates on medical and procedural practice.

When she finally returned to Colombia in 2007 with her American husband Roy Gilliland, everything was different for her. Her friends had grown older and moved on with their lives; the city of Bogota, which she had long pined for, had changed, too.

She realized then with clarity: Chicago is my home now.

And she remains passionate and determined about what has become her life's work.

"I really believe that working together we can bring hope and resources to many communities ... we can empower people and encourage them to be healthy and independent," Gilliland said. "We may not be able to solve the entire problem today, but I hope to inspire others to take the steps necessary to keep the journey."