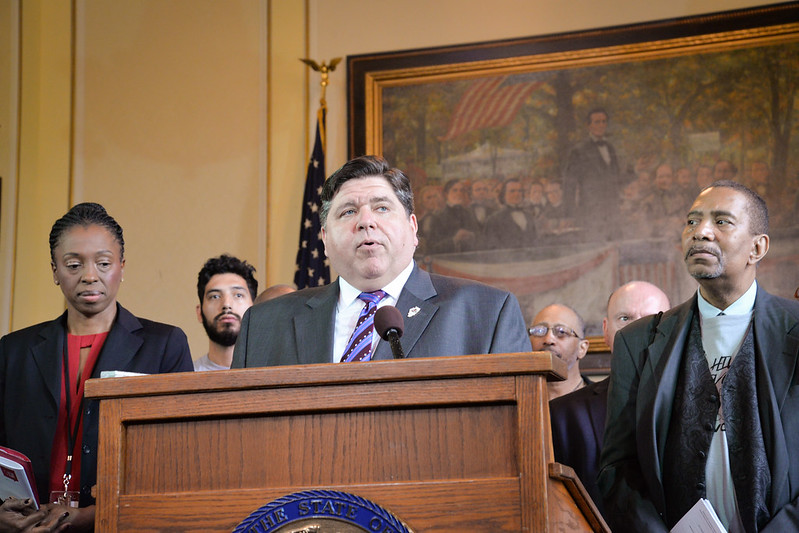 Speaking under the dome of the Old State Capitol in Springfield, Illinois Governor JB Pritzker delivered his annual State of the State and Budget address on February 2, 2022. Acknowledging that the state “continues to battle an invisible enemy [COVID-19]”, Governor Pritzker outlined his $45.4 billion Fiscal Year 2023 budget that includes substantial investments in education, behavioral health care and public safety.

While AIDS Foundation Chicago (AFC) supports these needed investments, we are dismayed that the Governor’s FY23 proposed budget does not prioritize increased funding to address the racial health disparities experienced by people living with or vulnerable to HIV including our Black, Latinx and LGBTQ+ communities. Specific to health and human services, the Governor’s FY23 proposed budget flat-funds most HIV-related programs when compared to FY22. This includes funding for the state’s flagship HIV prevention and treatment fund (the “HIV Lump Sum”) which remains unchanged, for a proposed total of $25.6 million.

AFC’s President/CEO John Peller shared his hope that the Governor’s proposed FY23 budget is the starting point, urging the Illinois General Assembly to build on it and prioritize increasing investments in HIV testing, prevention, and treatment. “While we were disappointed to see HIV funding at the same level as last year despite the state’s positive fiscal outlook, we are eager to build from this starting point. We will continue to advocate with Governor Pritzker and the General Assembly to prioritize increased HIV funding to fulfill the goals and priorities of the Getting to Zero Illinois plan to end the HIV epidemic by 2030. Making short and long-term investments in HIV testing, prevention, and treatment should be a top priority of the Governor and legislative leaders. We look forward to continued conversations with the governor’s staff and members of the General Assembly to strengthening these values.”

Without question, ending the HIV epidemic in Illinois is a key health equity and racial justice issue. The state will only meet its goal of ending the HIV epidemic by 2030 through increased access to and uptake of PrEP (pre-exposure prophylaxis) for prevention, retaining more people living with HIV in care and increased access to supportive services and programs, such as behavioral health treatment and stable housing.

In that regard, AFC is proud to partner with House Majority Leader Greg Harris (D-Chicago) and Senator Doris Turner (D-Springfield) on the Getting to Zero Illinois omnibus (HB4264/SB3632), legislation that would appropriate $15 million to implement the state’s GTZ-IL plan. In addition, AFC will continue working with legislators and advocates over the coming weeks and months to advocate for a $2 million increase in the HIV Lump Sum and a $15 million increase for HIV funding in the African-American HIV/AIDS Response Fund. Finally, AFC will advocate for $1 million in new state funding to address the growing rates of STI diagnoses (chlamydia, gonorrhea & syphilis).

Governor Pritzker began his remarks by sharing that “who we are is measured by how we care for those who need us.” We wholeheartedly agree with this sentiment. We realize that we cannot and do not do this work alone. AFC’s continued advocacy is rooted in our collective responsibility to protect the most vulnerable in our communities and amplify the voices, stories and lived experiences of people living with or vulnerable to HIV.

To that end, AFC urges advocates from across Illinois to participate in this year’s Virtual Advocacy Day that will be held March 9, 2022! Please checkout AFC’s 2022 state legislative policy priorities and join our Mobile Action Network to receive the latest updates on how you can use your voice and advocacy to advance health equity for people living with and vulnerable to HIV. For more information, please visit https://p2a.co/Vga0JeE

Today, AIDS Foundation Chicago (AFC) is excited to  announce the fourth cohort of the...
Read more...