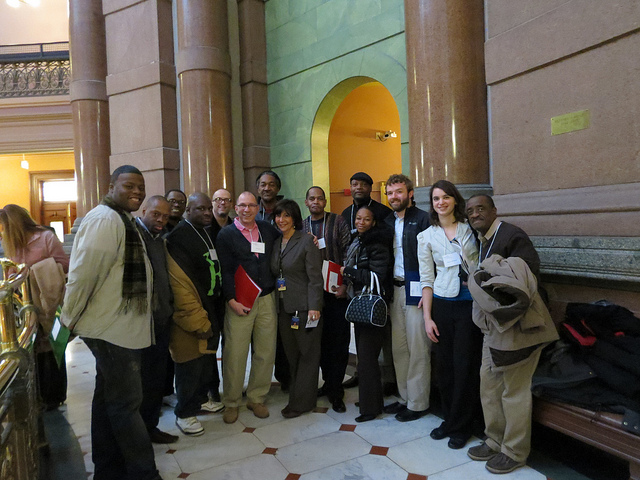 This week, an Illinois legislative body advanced a major piece of the Affordable Care Act (ACA) when the House Human Services Appropriation Committee passed HB 6253, Medicaid Financing for the Uninsured.

Last year, the Supreme Court ruled that the federal government couldn’t force states to cover low-income uninsured people through Medicaid.  We knew we’d have to take the fight to the Illinois General Assembly.

This effort brought together an unusual mixture of health care providers, business interests, patients and advocates, demonstrating sweeping consensus that it is right and advantageous for Illinois to accept new federal Medicaid funding.  This new opportunity – paid for 100% by the federal government for the first three years – will fill a historic gap in the Medicaid program and provide health care coverage for thousands of low-income Illinoisans who are not now eligible for Medicaid, including many thousands living with HIV/AIDS.


After Tuesday’s committee vote, however, the waning hours of the current term of the General Assembly did not provide enough time to advance the bill further.  We thank State Representative Sara Feigenholtz (D-Chicago) and Senator Heather Steans (D-Chicago) for sponsoring the bill, and are grateful for the leadership of Julie Hamos, director of the state agency that runs Medicaid.

Nevertheless, our momentum continues with renewed commitment and excitement. A new Medicaid bill has already been filed, Senate Bill 26, and we have laid a strong foundation to build on in the 98th General Assembly.

As the new General Assembly begins, your voices will need to be heard again with in-district meetings, emails and phone calls to your Senators and Representatives, many of whom will be new in office or serving from redrawn districts. It will be critical that these legislators hear from you.

Thank you for all you have done so far, and especially to the 15 advocates (pictured right) who went to Springfield on Monday to lobby for the Medicaid bill.  And thank you, in advance, for all the help you will provide to obtain federal Medicaid funding for the uninsured in Illinois.