The AIDS Foundation of Chicago (AFC) and Howard Brown Health commend the recent announcement by Felicia Norwood, director of the Illinois Department of Healthcare and Family Services (HFS), that the department will conduct a comprehensive review of HIV medications covered on the fee-for-service formulary. 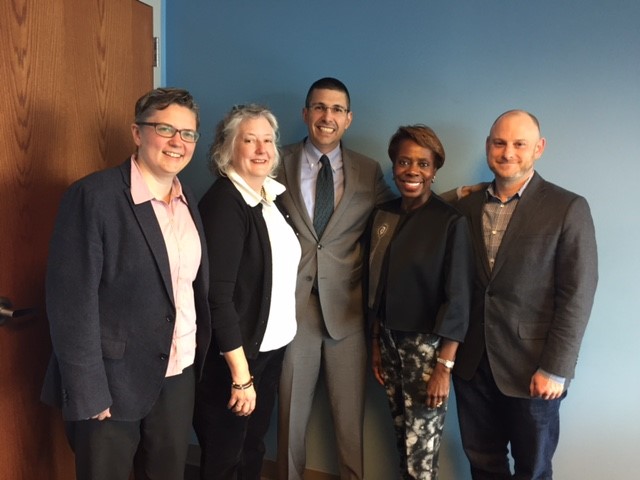 The announcement was the direct result of a productive meeting between AFC and Howard Brown officials and Director Norwood. Norwood’s announcement and the meeting were called to address advocates' concerns regarding new restrictions placed on Medicaid beneficiaries’ access to the lifesaving drug Atripla, a once-daily single tablet regimen (STR) prescribed for HIV treatment.

The state’s Committee on Drugs and Therapeutics (D and T Committee) will conduct the review of all anti-HIV agents on the fee-for-service formulary at a June meeting, according to Norwood. The Medicaid program makes prior approval and Preferred Drug List (PDL) decisions in consultation with the Illinois State Medical Society Committee on D and T. The committee, comprised of practicing physicians in various specialties who actively participate in the Illinois Medicaid Program, forms recommendations based upon evidence-based clinical factors including safety, effectiveness and outcomes, according to a state website.

AFC and Howard Brown Health support the department’s decision to consider all HIV treatment agents as a class rather than set policy just for STRs. Both organizations urge the state to follow the U.S. Department of Health and Human Services (DHHS) HIV Treatment Guidelines, which are assembled by a national panel of expert HIV clinicians and advocates and represent the best medical evidence to treat HIV. Furthermore, advocates urge the state to ensure access to all FDA-approved STRs without prior-authorization restriction. Research indicates STRs improve treatment adherence toward maximum viral suppression and are proven to be effective at reducing treatment failures, resistance and new transmissions.

“The AIDS Foundation of Chicago and Howard Brown Health thank Director Norwood and her team for meeting with us right away to address our mutual concerns,” shared Howard Brown Health’s President and CEO David Ernesto Munar. “In addition to our appreciation of Director Norwood’s leadership, we’re also grateful that AFC and HBH have the opportunity to properly advise the D and T Committee in this crucial decision making process, ensuring the outcome will have a beneficial impact on this vulnerable demographic. We hope this will result in more STRs and the newest HIV drugs being included on the Medicaid Fee-For-Service system’s preferred drug list.”

AFC and Howard Brown also commend HFS for placing HIV patients’ care front and center in the Illinois Medicaid program. “The results produced by the May 6 meeting are welcomed by AFC and Howard Brown and we hope that it is a foundation from which future progress can be built,” said John Peller, AFC’s president/CEO. “We’re also pleased that the state is grandfathering existing patients prescribed Atripla and won’t require them to undergo prior authorization. We thank HFS for their continued pledge to follow the DHHS HIV/AIDS Treatment Guidelines, which support the therapeutic benefits of STRs.”

“AFC has had extensive conversations with the drug manufacturers, including Bristol-Myers Squibb, Gilead, Janssen and ViiV,” continued Peller. “We agree with them that STRs have become the standard of care. Over the next few weeks, our organizations will lead advocates to weigh in with Illinois Medicaid to inform the development of the preferred drug list.”

AFC’s Medical Advisory Group, chaired by Norma Rolfsen, RN, FNP, who attended the May 6 meeting with HFS, will play a key advisory role in the process.

There are currently six approved STRs from which providers may choose in customizing individual patient care for people living with HIV, including  Atripla, Complera, Genvoya, Odefsey, Stribild and Triumeq. Atripla, the oldest STR, was the only one covered without prior authorization until late April, when Illinois Medicaid instituted prior authorization. The move came in response to a change in the DHHS HIV treatment guidelines, which now list Atripla as an “alternative” or second-line treatment; previously, it was “recommended” or first-line.

Meeting attendees in above photo include:

The deadline to enroll in health care coverage is approaching fast. The AIDS Foundation of...
Read more...

The AIDS Foundation of Chicago (AFC) has prepared a report on the estimated monthly out ‐ of ‐...
Read more...