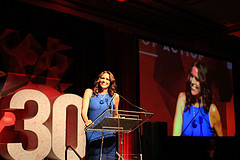 The AIDS Foundation of Chicago (AFC) commemorated its 30th year of action in the HIV/AIDS community with a celebratory gala on Saturday, May 16, at the Hilton Chicago. The milestone event hosted 680 guests and raised significant funds for ongoing prevention, care and advocacy services in the fight against HIV epidemic nationwide. Actress Amy Landecker, of the Golden Globe award-winning series Transparent, served as the master of ceremonies for the event.

As the evening began, guests mingled in the Hilton’s Continental Ballroom and enjoyed cocktails and appetizers, participated in AFC’s popular punchboard, and purchased raffle tickets from volunteers to win luxurious vacations to Aruba and New York City.

Following the reception, guests moved into the elegantly decorated International Ballroom, with towering gold centerpieces at every table, ravishing red lighting, and “30” sculpture, in commemoration of AFC’s 30 years of service, at center stage. Kehoe Designs kindly donated their creative decorating talent for the evening.

President/CEO John Peller set the tone for the evening with powerful remarks about the evolution of the HIV/AIDS community.

“New cases have been cut by 40 percent in the past decade, but with that progress came apathy. We have made great strides over the years but AIDS is still a problem and we must not lose this moment to continue the fight,” Peller stated. 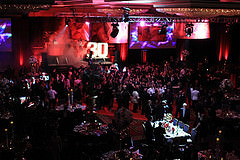 Landecker, a former AFC staff member, addressed the crowd about the importance of the organization and what it means to her. She connected her experience at AFC to her current role on Transparent — a show about a retired professor transitioning late in life from male to female and the reaction of her dysfunctional family.

“I’m so thrilled that my pursuit of being an actress paid off with my dream job on Transparent, which combines my love of acting with my love of social activism, which started 20 years ago when I worked at AFC,” said Landecker.

After dinner, Landecker and Gary Metzner, senior vice president of Sotheby’s, led a live auction for vacations to Hawaii, Las Vegas and Coronado Island. That followed with a “Paddle Raise for PrEP,” a live auction supporting efforts to build awareness and access to a groundbreaking new HIV prevention method, PrEP (pre-exposure prophylaxis), in Chicago.

To close the event, guests grooved on the dance floor to music by DJ Kiss, whom The New York Times referred to as “one of the fashion world’s most sought-after DJs.”

This press release was produced by Public Communications Inc.

Categorized under AFC news, Inside Story and Special events.

World of Chocolate 2018 is right around the corner, folks! Check out our behind the scenes interviews...
Read more...