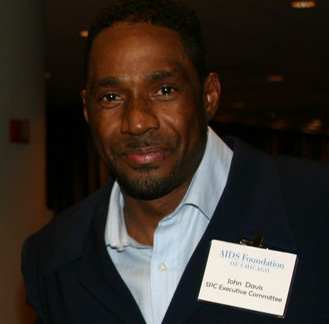 It is with great sadness that we mourn the loss of John Davis, a great warrior in the fight against HIV/AIDS.

Davis died on Saturday, Dec. 10, 2011, after a long battle with HIV. He worked as an emergency services associate, on the housing team, at the AIDS Foundation of Chicago (AFC) in 2007 before leaving for health reasons. Davis will be remembered as a relentless and courageous advocate for those with HIV/AIDS, particularly on Chicago’s South Side.

“John was very passionate and committed,” said Melanie Paul, supportive housing coordinator for AFC. “He helped me find my voice when I first started advocating.”

Paul was mentored by Davis when they both served on the Ryan White Planning Council. She remembers his kindness, his sense of humor and his honesty.

“Because he was so open with his experience,” Paul said, “it made me feel more comfortable sharing my own experience as a person living with HIV.”

Before Davis joined AFC, he worked as a case manager for the Woodlawn Organization and later for the Alliance for Community Empowerment. He was an activist who participated in local, state and federal advocacy activities.

For a time, he also spearheaded and facilitated an HIV/AIDS service providers’ picnic on the South Side that brought together clients and organizations alike.

“John was very client-centered, always hustling for his clients,” said Michael Grego, Ryan White Part A and Department of Rehabilitation Services case management coordinator for AFC, who had known Davis when they were both case managers.

“He was always asking questions — that’s what I remember about John — always wanting to know what impact things would have for people living with HIV/AIDS,” Grego said.

In 2007, Davis grew too ill to work full-time and left AFC. But he still made it a point to drop by whenever he was in the neighborhood.

“He will truly be missed,” Tucker said.

The Homegoing Service for John Davis

AFC is heartbroken to learn that long-time HIV advocate Ben Montgomery passed away. Ben was a campaigner...
Read more...