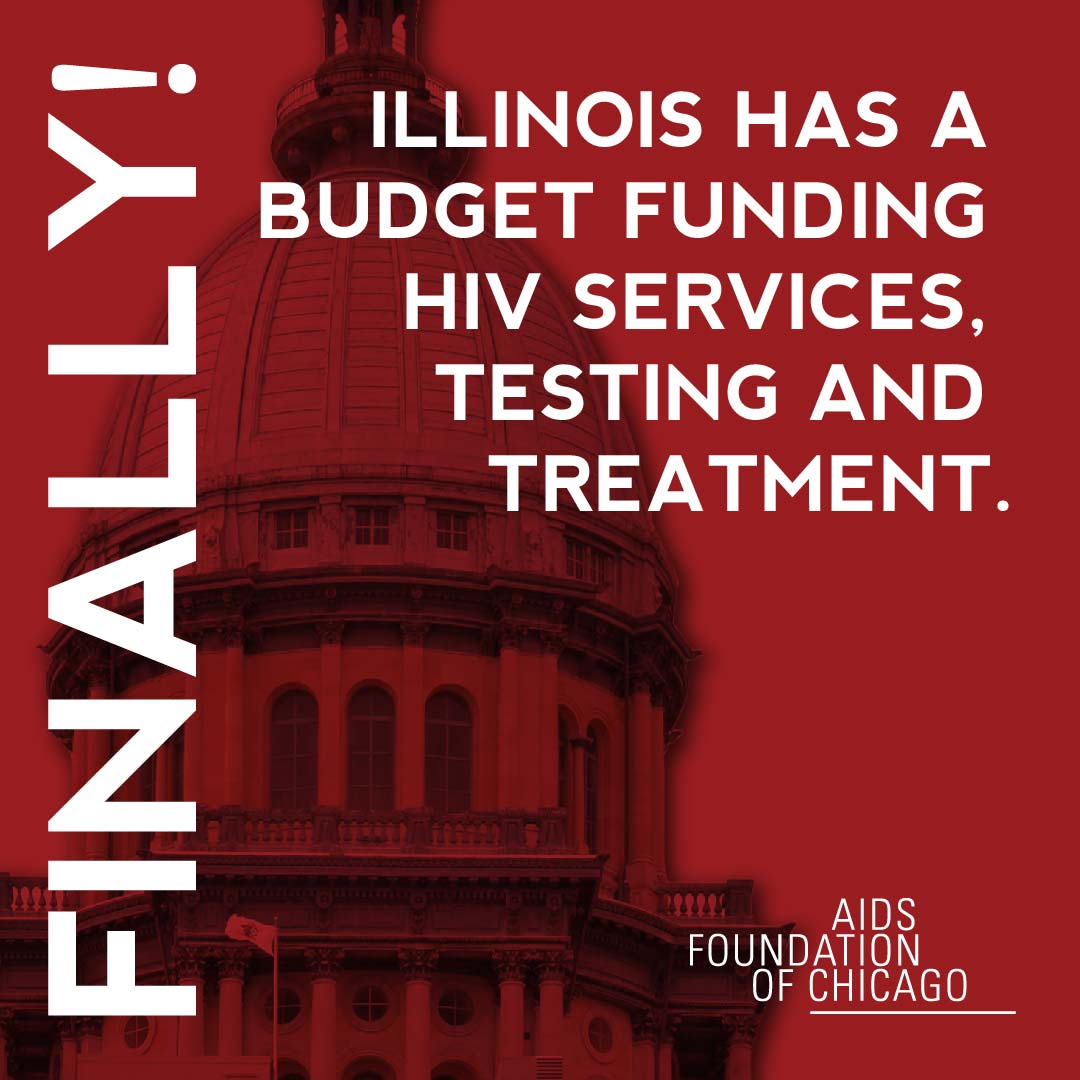 The Illinois budget impasse has finally come to an end.

Over the July 4th holiday weekend, the Illinois General Assembly passed bipartisan legislation for a full Fiscal Year (FY) 18 budget that supports health equity across the state. Legislators also passed a revenue bill (which increases the Illinois income tax from 3.75% to 4.95%) to actually fund that budget. The AIDS Foundation of Chicago (AFC) supports the much-needed, permanent revenue to stop the cuts, repair the damage that has already been done, and make smart investments in our state’s future.

“We have worked for three years to ensure that Illinois has a responsible budget that generates revenue and supports residents across the state,” said John Peller, AFC’s president/CEO. “Stop-gap spending plans or other Band-Aid solutions have been unacceptable. An untold number of Illinoisans have died or suffered preventable health crises in the meanwhile because of a lack of funding for essential services.”

The budget contains $25.4 million in appropriations for HIV services and support, including testing, treatment, and education – which is restored to FY 15 levels. The supportive housing budget has even seen a slight increase from FY 15, to $13.4 million, and the African American HIV/AIDS Response Fund has been fully funded at FY 15 levels to ensure that adequate funding goes to services and programs that serve communities hardest hit by the HIV epidemic, after proposals from Gov. Rauner sought to drastically cut the program. Though the backlog of bills (which today stands at $14.7 billion) will still make timely payments an ongoing issue, the budget and revenue bills will actually allow those payments to be made to providers.

The path to the FY 18 budget was not without drama: Governor Bruce Rauner promptly vetoed these pieces of legislation, and the Senate promptly voted to override those vetoes. Today, the House followed suit and overrode Gov. Rauner’s vetoes as well, and the budget and tax increase is now law.

The move to increase revenue in the state was a crucial ingredient in devising a responsible budget. “Since 2015, Illinois has been operating without a budget, spending more than it is taking in,” recalled Dan Frey, AFC’s director of government relations. “As a result, promised payments from the state have been delayed, programs have shut down, service providers have permanently closed their doors, and the state has accumulated nearly $15 billion in unpaid bills.”

AFC sends deep and profound thanks to the members of the General Assembly for finally putting aside politics and doing the right thing. “It is incredibly hard to vote to increase taxes, but it was the only responsible choice for moving our state forward,” said Ramon Gardenhire, vice president of Policy and Advocacy at AFC. “We thank them for this act of political courage.”

Please take a moment today to call or send a message to your legislators in both the House and Senate and thank them for finally passing a budget and revenue increase. Visit aidschicago.org/find to find your state legislator's contact information and to share your gratitude for their work in passing a positive budget.