Chicago, February 1 — Today, the Chicago PrEP Working Group (CPWG) launched PrEP4Love, a citywide, sex-positive media campaign designed to increase awareness of PrEP (pre-exposure prophylaxis), a daily HIV prevention pill for HIV-negative people. Honest and visceral photography with a simple tagline — “One pill. Once a day. Protect against HIV.” — is displayed in ads throughout Chicago on CTA trains and buses, as well as in an interactive, heated bus shelter at State and Lake. The campaign also includes a large online advertising component anchored by the prep4love.com website. 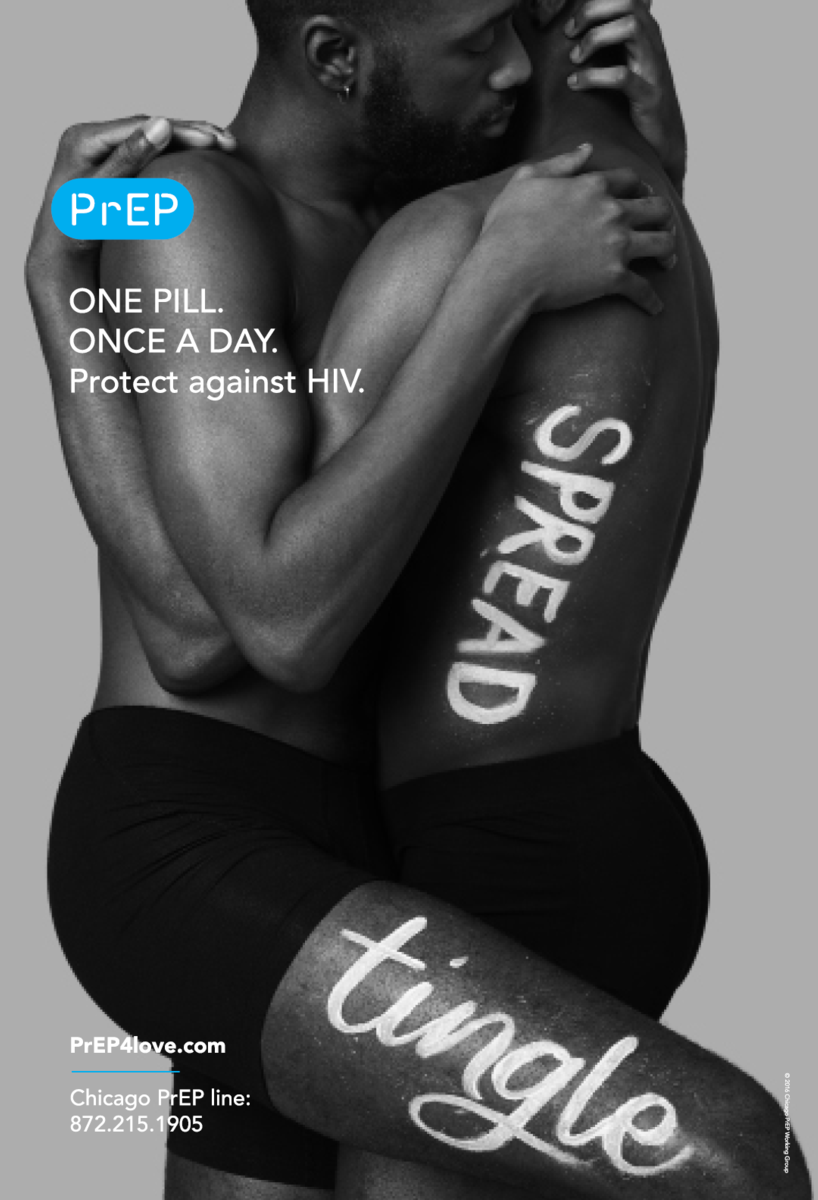 PrEP was approved by the U.S. Food and Drug Administration in 2012, is recommended by the U.S. Centers for Disease Control and Prevention, and is endorsed by the White House. PrEP is an extremely important new tool to prevent new HIV transmissions, especially for people who don’t always use condoms in communities where the burden of HIV is great.

PrEP4Love focuses on Chicago communities that are especially vulnerable to HIV, including young gay and bisexual Black men, transgender women of color and Black heterosexual women. The four pairs of models featured in the campaign were discovered through a community model search.

“When people see the campaign, they are going to see real people who are relatable, people they may know personally,” said Beverly Ross, a Chicago-based transgender advocate who is featured in the campaign.

The campaign pairs words often used when discussing HIV transmission like “spread,” “transmit,” “contract” and “catch” with the reasons we enjoy sex — things like love, desire and tingle.

“The campaign message is simple: With PrEP, you can catch desire, contract heat, spread tingle, transmit love and enjoy your sexuality while protecting yourself against HIV,” said John Peller, AIDS Foundation of Chicago (AFC)’s President/CEO. “With just one pill, taken once a day, PrEP lowers your chances of contracting HIV up to 99%. That level of protection offers extraordinary peace of mind, which is incredibly sexy.”

The PrEP4Love campaign is an effort led by AFC and the CPWG, who secured pro bono and volunteer services from four creative agencies: Leo Burnett, Starcom, Spark and Razorfish. These sibling agencies provided creative services, media strategy and website development for the campaign under the auspices of Égalité, the LGBTQIA business resource group of Publicis Groupe. Chicago-based, world renowned photographer Sandro shot the campaign.

The campaign is supported by a generous grant from the Alphawood Foundation and the thoughtful contributions of numerous individuals. Extensive community input, including focus groups, helped shape the campaign.

Said CPWG member Dr. John Schneider, a University of Chicago researcher and physician who prescribes PrEP for his patients, “Our coalition spent over a year developing PrEP4Love, and we’re all very enthused about its debut during Black History Month, a month that also includes National Black HIV/AIDS Awareness Day (Sunday, Feb. 7) and Valentine’s Day.”

Schneider’s group at the University of Chicago manages the Chicago PrEP line [872-215-1905], a phone service designed to help people access PrEP, including linkages to health care providers across the city, health insurance and low-cost or free medication. The PrEP line is highlighted on all campaign materials.

About 1,000 people are diagnosed with HIV every year in Chicago. PrEP is a promising tool that can help slow the epidemic, along with other safer sex practices, ongoing HIV testing, and linkage to culturally competent care and treatment for people living with HIV.

The CPWG is a coalition of more than 150 individuals representing dozens of Chicago organizations and clinics that provide PrEP services, conduct PrEP education and navigation, perform PrEP research, and engage in PrEP advocacy. The goal of the CPWG is to improve awareness of, and access to, PrEP for those most vulnerable to HIV.

About the AIDS Foundation of Chicago

Categorized under AFC news, Chicago, Illinois and Inside Story.