The three organizations that coordinate HIV prevention services in Illinois outside Chicago – Champaign-Urbana Public Health District, Illinois Public Health Association, and Public Health Institute of Metropolitan Chicago – and the AIDS Foundation of Chicago are outraged to learn that new data from the Illinois Department of Public Health (IDPH) found the state budget impasse decreased the number of people newly identified as HIV-positive by nearly 250 people in 2014, 2015 and 2016. 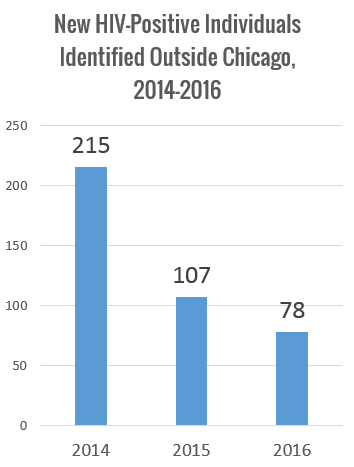 Illinois last had a complete budget in 2014, and in 2015 operated without a budget for the first half of the calendar year under a Stop Gap appropriations bill from July through December.  State general revenue funds, which have been most impacted by the lack of a state budget, support nearly all HIV testing conducted outside the city of Chicago. As a result, most of the undiagnosed people with HIV are living in cities and towns across Illinois, including the Cook County suburbs.

Illinois Gov. Bruce Rauner and the Illinois General Assembly must recognize this unprecedented stalemate is jeopardizing the lives of Illinoisans. A full-year state budget with adequate revenue is needed immediately to ensure individuals with HIV are identified and linked to care. With fewer resources dedicated for HIV testing, opportunities to identify and link individuals living with HIV to care have significantly decreased.

That 245 people with HIV have not been diagnosed has two major consequences for public health in the state of Illinois:

It costs over $350,000 to provide medical care to a person with HIV over their lifetime.

It is inexcusable to endanger the lives of our most vulnerable citizens due to a political stalemate. There is no time to waste – we urge Illinois to invest in comprehensive HIV testing and treatment programs to prevent new cases of HIV and link those living with the virus to care.

The lives of Illinoisans are on the line.

About the AIDS Foundation of Chicago: AFC mobilizes communities to create equity and justice for people living with and vulnerable to HIV and related chronic diseases. AFC aspires to create a world in which people living with HIV and related chronic diseases will thrive, and new HIV infections will be rare. More at: aidschicago.org.

About Champaign-Urbana Public Health District: CUPHD) was formed by referendum in 1937 to establish public health services for the Cunningham Township and the City of Champaign Township.  In 1996, CUPHD began providing services to all of Champaign County.  Our mission is to “improve the health, safety, and well-being of the community through prevention, education, collaboration, and regulation”. More at: c-uphd.org. More at CUPHD is lead agent for the 17-county Region 6 in central eastern Illinois around Champaign-Urbana.

About the Illinois Public Health Association: IPHA is the oldest and largest public health association in the State of Illinois. As one of the largest affiliates of the American Public Health Association, IPHA is widely recognized as a leader in the field of public health advocacy, health education and promotion. More at IPHA.com. IPHA is the lead agent for IDPH-funded HIV prevention services in regions 1-5, covering the western half of Illinois from Rockford to Carbondale.

Categorized under Illinois and Prevention.

Get your HIV status at these AIDS Run & Walk Chicago beneficiaries

Each June 27, National HIV Testing Day (NHTD) encourages people of all ages to get tested for HIV. Chicago...
Read more...