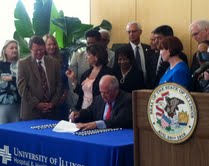 A historic day for Illinois, as the Medicaid bill to expand health care to thousands becomes law.

Under an expanded Medicaid program, the state will provide health care to 342,000 more Illinoisans who currently don’t qualify for coverage because of income level or health condition, including thousands of people living with HIV. The federal government will pay 100 percent of the cost of coverage for the new Medicaid population for the first three years; after 2020, the federal government will pay 90 percent, and the state will pick up the remaining 10. SB 26 will bring an estimated $4.6 billion in new federal spending to Illinois, resulting in tens of thousands of jobs and new economic security for families.

"In the home state of President Obama, we believe access to quality health care is a fundamental right, and we proudly embrace the Affordable Care Act," Quinn said.

Many thanks to our supportive legislators, partner organizations, and dedicated advocates who worked tirelessly on this piece of legislation.