Thank you for your long history of support for HIV prevention and care services in Illinois.  We know Illinois faces yet another difficult budget year, and you have new and unprecedented duties to allocate funding among equally deserving programs for disadvantaged populations.  We appreciate our long partnership with the legislature, the Illinois Department of Public Health (IDPH), and administration to improve HIV care and prevention outcomes.  Today, we will provide recommendations for the FY 2012 state budget and discuss one of the subjects of the hearing, the intersection between corrections and HIV programs.

The AIDS Foundation of Chicago (AFC) has two recommendations for the FY 2012 state budget.  They are to adopt National HIV/AIDS Strategy goals for Budgeting for Outcomes, the state’s new outcome-oriented process for determining what programs should be funded next fiscal year.  Second, the state should overhaul the IDPH grant-making process. 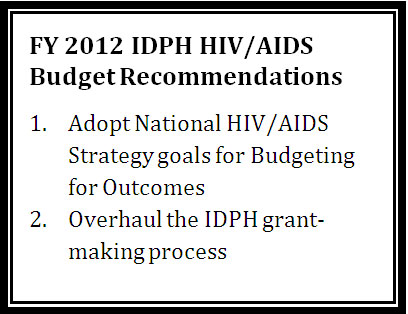 HIV prevention and care programs are cost-effective: We’re here to testify about IDPH HIV programs that literally keep people with HIV alive and save the state millions of dollars annually by preventing new HIV cases. Today, there are an estimated 46,000 people living with HIV in Illinois, and about 1,500 people are newly reported as diagnosed with HIV each year.  The lifetime cost of treating a person with HIV is estimated to be over $300,000 for medical care alone.  It will cost $450 million over the coming decades to provide lifetime medical care for people diagnosed with HIV this year alone, and another $450 million for people diagnosed next year, and so on.  Because HIV disproportionately affects low-income people, the majority of these costs will be borne by the state.

Governor Quinn proposed an 11% or $3.5 million reduction in state HIV funding for FY 12.  The Governor would reduce funding from $30.88 million in FY 11 to $27.34 million in FY 12.  He also proposed consolidating four HIV-related budget lines into one.  We do not support a funding reduction for HIV services, and are wary of a move to consolidate budget lines.  Funding reductions to essential HIV prevention and care services will likely increase new HIV cases, worsen health outcomes, and escalate state HIV treatment costs.

The proposal to merge four budgetary line items into one raises transparency questions. What is the commitment to each of four worthy activities—the AIDS Drug Assistance Program (ADAP) and HIV prevention; HIV/AIDS hotline; HIV correctional projects; and HIV services for hard-hit minority communities—that would be lumped into a single appropriations category?  Without greater clarity of the actual funding amount that would be allocated for each of these important activities, we cannot at this time support this consolidation, which risks diminishing accountability and transparency.

Despite the state’s ongoing fiscal crisis, it would not be for Illinois to reduce funding for programs that save lives and money.  HIV programs work by slowing the spread of a communicable disease that remains incurable and costly to treat.

RECOMMENDATION 1: Adopt National HIV/AIDS Strategy goals for Budgeting for Outcomes.  In weighing your decisions about HIV-related appropriations, please take into consideration the National HIV/AIDS Strategy, which President Obama released last year to improve outcomes and results in the U.S. fight against HIV/AIDS.  The federal HIV/AIDS Strategy compliments the state’s new Budgeting for Outcomes process, which requires the state to make budgeting decisions based on progress towards achieving goals.  We urge you to ensure that all state budget decisions are made with the Strategy in mind to allocate funding more rationally and effectively.  The HIV/AIDS Section within IDPH has started a community process to implement the Strategy in Illinois, and we look forward to continuing to participate in the process.

The Strategy has three goals that should be adopted for Budgeting for Outcomes:  reduce new infections, engage people with HIV in medical care, and reduce health disparities.  Illinois should leverage the Strategy in making budget decisions that follow three of the Strategy’s recommendations:

1. Improve outcomes: To improve outcomes, IDPH should benchmark current outcomes, set targets, and measure progress towards achieving those targets.  Improving outcomes also requires reallocating funding toward efforts that will yield the greatest results.  For example, HIV testing programs that reported the highest levels of new cases of diagnosed HIV might be prioritized for funding over other programs with fewer results.

2. Better target funds to populations at greatest risk: IDPH should ensure funds reach populations at greatest risk of contracting HIV or of dropping out of care, starting by benchmarking what groups are receiving interventions now.  This should be done for all HIV funding sources across state government. Effective interventions for gay men and men who have sex with men of all races, and particularly young African Americans and Latinos, should receive a renewed focus.

Maintaining support for the AIDS Drug Assistance Program (ADAP) is a critical element of implementing the national Strategy in Illinois and achieving Budgeting for Outcomes results.  ADAP is unquestionably one of the state’s most effective and cost-effective programs.  ADAP:

• Reduces long-term medical care costs by promoting early intervention and treatment.  While it costs $30,000 or more per year to treat someone in the late stages of HIV disease, early treatment can cost half as much per year.

• Fosters independence by keeping people with HIV healthy enough to work, increasing their dignity, and allowing them to be productive members of society.

• Prevents new HIV cases.  People receiving HIV treatment have lower levels of the virus in their bodies, and are as a result significantly less likely to transmit HIV.  In fact, research indicates that there is near-zero likelihood of transmission for an individual who is successfully treated for HIV.

ADAP has achieved $2-$3 million in efficiencies that will slow the growth in the program. IDPH released in January 2011 information indicating that ADAP may need an additional $6 million in state funding next fiscal year.

RECOMMENDATION 2: Overhaul the IDPH grant-making process.  IDPH will save money and improve outcomes by overhauling the department’s grant-making process.  For example, many community-based organizations, including ours, do not yet have executed grant agreements for the current fiscal year—which ends in three months.  IDPH has delegated to community-based agencies the responsibility for providing services, but the survival of these organizations is threatened by the delays in grant agreements.  The IDPH grant agreement process is deeply flawed and must be fixed.  We call on IDPH to immediately release a request for proposals for FY 2012 as a first step to improve the process.

II. THE INTERSECTION BETWEEN CORRECTIONS AND PUBLIC HEALTH PROGRAMS

The second topic of this hearing is the intersection between corrections and human service programs. I want to highlight a vital program that assists people with HIV returning to the community from prison or jail, but is jeopardized by consolidating budget lines and grant-making delays.  The HIV and Corrections Re-entry Project, funded by IDPH through the HIV and Corrections budget line proposed for consolidation, achieves the following outcomes:

• Reduces recidivism, saving the state over $1.1 million per year in prison costs: Just 15% of clients returned to prison or jail, compared to 50% in the regular population.

• Reduces long-term medical care costs by promoting early intervention:  More than nine out of ten clients are successfully linked to specialized medical care with support from this program.  Because they are accessing HIV treatment, long-term health care costs related to an AIDS diagnosis are reduced.

Unfortunately, this program’s successes have been jeopardized for three years in a row because IDPH is unable to award and execute grant agreements on a timely basis.  This year, three out of five intensive case managers were laid off because agencies could not pay their salaries with no guarantee of funding. New intake was halted.  Over forty clients—one in three—could not be located when the program finally resumed.

We appreciate our long partnership with the legislature, IDPH, and the administration to improve HIV care and prevention outcomes.  We look forward to further discussing these recommendations with you.