HIV/AIDS advocates from across the United States gathered in Washington D.C. this past February to partake in AIDSWatch 2013, the nation’s largest annual constituent-based federal advocacy event. Thanks to the Treatment Access Expansion Project and AIDS United, it was an invigorating two days. In total there were 200 legislative meetings and 170 attendees! 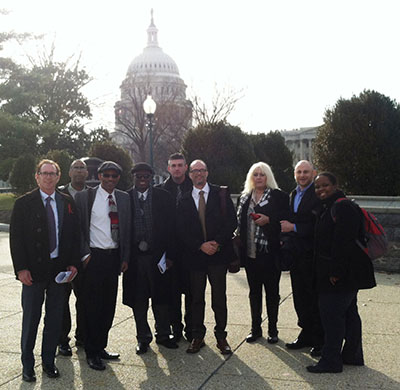 It was an exciting time to be on Capitol Hill, but it was an incredible time for HIV/AIDS advocates to improve the health and lives of people living with HIV and to reduce new infections. The passage of the Affordable Care Act (ACA) and the adoption of the National HIV/AIDS strategy in 2010 marked significant milestones in changing the course of this epidemic. The mission of AIDS Watch 2013 was to educate members of congress and ask them to support three important HIV/AIDS issues this congressional session: 1) Protect, fund and support effective implementation of the ACA; 2) support the vital role of the Ryan White Program and other HIV/AIDS services; 3) and support science over politics.

Alongside legislative issues, Illinois delegates shared personal stories to pack an even greater congressional punch. When advocating to protect HIV services, a constituent from Decatur, Ill., bravely told her U.S. Congressman how Ryan White Programs saved her life. She would not be sitting in his office right now without such a vital network of care, she said, and protecting these funds was critical for her and hundreds of thousands of others living with HIV/AIDS.

AIDSWatch 2013 brought together a united front of HIV/AIDS advocates in a time of great hope for the epidemic. First year AIDSWatch participant Chris Wade from Illinois concluded, “To be a part of a national event was inspiring, and the sense of camaraderie among people living with HIV/AIDS was enlightening!”

You can see more pictures of the AIDSWatch 2013 event on AIDS United’s Facebook page.