The Illinois Senate on May 3, 2011 released nearly two dozen bills that could make up next year’s state budget.  The proposed (IDPH) budget would reduce state funding for HIV programs by 11% or $3.5 million.  This funding cut was included in Governor Pat Quinn’s introduced state budget in February.

The AIDS Foundation of Chicago (AFC) is strongly opposed to the recommended HIV funding cut and other funding cuts.  We urge the General Assembly to restore funding to the current-year level of $30.88 million.  In addition, the four separate spending accounts that were proposed for consolidation should be re-established.

To prevent these cuts, the General Assembly must above all raise revenue without increasing taxes.  Above all, AFC urges the Illinois House to abandon its artificially low revenue estimate for the next state fiscal year, averting $1.3 billion in needless funding cuts.  Lawmakers should also enact measures to prevent loss of state revenue, such as requiring businesses to follow current depreciation rules instead of newly enacted federal rules. Tell the General Assembly to reject HIV funding cuts! 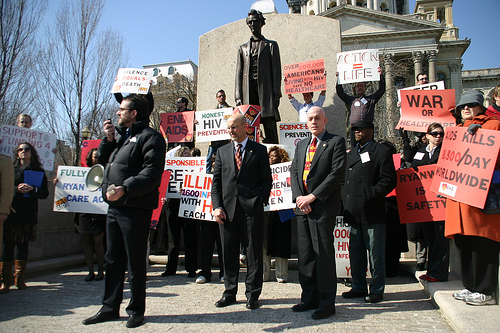 The General Assembly should take the following actions:

Restore HIV funding: The General Assembly must restore funding to the amount spent this year, $30.88 million.  Cost-effective HIV programs literally keep people with HIV alive and save the state millions of dollars annually by preventing new HIV cases. Every HIV infection prevented saves $300,000 in lifetime medical care costs, much of which will be paid for by the state. A $3.5 million funding cut will likely worsen the AIDS epidemic in Illinois by increasing HIV cases and make people with HIV sicker by denying access to HIV medications.

The IDPH Center for Minority Health, which now oversees the Minority HIV/AIDS Prevention program and the IDPH HIV/AIDS Section must work together to better target HIV programs to populations at the greatest risk and support the most effective interventions.

Maintain access to cost-cutting HIV medications: IDPH in April 2011 announced that eligibility for the AIDS Drug Assistance Program would be reduced from 500% of federal poverty to 300% of federal poverty.  Although current clients in this income range could continue on the program, at least 100 people with HIV a year would be barred from the program.  If funding cannot be identified to reverse this decision, Illinois must institute a waiting list instead of reducing the income level.  An overall HIV funding cut could worsen the ADAP funding crisis.

In a significant bright spot, the Senate proposed restoring supportive housing funding to current-year levels of just over $20 million.  State supportive housing funding provides case management that helps people with serious chronic diseases, including HIV, mental illness, or other challenges live in the community.  AFC will continue to advocate for a funding increase to support programs that are beginning next fiscal year, including one that will house 50 people with HIV who have expensive medical conditions.

AFC is significantly concerned about additional, critical programs that are slated for reductions.

•    Illinois Cares Rx: Governor Quinn proposed eliminating Illinois Cares Rx, which helps low-income Medicare beneficiaries—including people with HIV—afford medications.  Although we praise the Senate for restoring $50 million for the program, we are concerned that people with HIV will return to ADAP for assistance, further straining the already-underfunded program.  The Illinois Cares Rx program should be maintained.

•    AFC is concerned about proposed cuts to homeless prevention & emergency housing assistance funding, which help people stay in their homes by assisting with rent, utilities, or other expenses.  It is far more cost-effective to help someone remain in their home than for them to become homeless.

•    Local Health Protection grant funding is distributed to every public health department in the state according to a formula, and is the basis for a strong public health system. The Senate’s proposed $2 million cut to this line would weaken the infrastructure that supports HIV and STD testing, prevention and treatment.

The Illinois House is expected to release shortly its own budget proposal for the state fiscal year that begins in July. The House budget relies on artificially low revenue estimates and cuts an additional $1.3 billion in spending.  Both chambers must pass and then reconcile their different spending plans by May 31.


Categorized under Advocacy and Illinois.