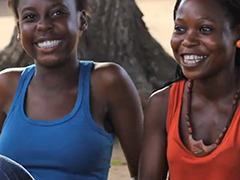 Kuala Lumpur, Malaysia — Pathfinder International’s short film about two young activists in Mozambique (pictured right) is the winner of the international Female Condoms Are _______ Film Contest. “Female Condoms Are My Power, My Protection, My Pleasure!” is one of nearly 30 short films from 12 countries that were submitted to the contest to describe what female condoms mean to the filmmakers and their communities and how female condoms might enhance their lives. Pathfinder International’s film features Deolinda and Benjamin, two activists with a passion for educating their peers about female condoms.

“We will use these powerful and smart films to facilitate important dialogues within our communities about how women and men can use female condoms to take active roles in and be advocates for their own sexual health," said Jessica Terlikowski, the AIDS Foundation of Chicago's Director of Female Condom Advocacy and Programming. She also serves as Coordinator of the National Female Condom Coalition.

The film competition was organized by PATH, the Universal Access to Female Condoms (UAFC) Joint Programme, the Center for Health and Gender Equity (CHANGE), and the National Female Condom Coalition (NFCC) to draw attention to the role female condoms can play in improving women’s health.

“We wanted to build a bridge between creative arts and global health, because film can be such a powerful way to connect with audiences and move them to action,” said Kimberly Whipkey, advocacy and communications specialist at PATH and organizer of the contest. “Ultimately, we hope the films will instill positive attitudes and inspire policymakers, health professionals, and individuals to support access to female condoms in their communities.”

Female condoms offer female-initiated protection from both pregnancy and sexually transmitted infections, including HIV. Despite their potential to improve women’s and men’s health—particularly in countries with high rates of HIV and unmet need for contraception—awareness and availability of female condoms remain low. PATH, UAFC, CHANGE, and NFCC are all working to generate greater awareness of female condoms and support programming that will make female condoms available to more women in developing countries as well as in the United States.

A panel of five judges with expertise in film, HIV/AIDS, and reproductive health decided the competition’s winners. The judges included Beth Barrett, director of programming for the Seattle International Film Festival, Aaron Bramley, co-founder and executive director of Lights. Camera. Help., Tam Ho, executive director of North America and Asia Pacific Programs at the M?A?C AIDS Fund, Vastha Kibirige, coordinator of the AIDS Control Program for the Uganda Ministry of Health, and Nina Strøm, a senior advisor for sexual and reproductive health and rights at the Norwegian Agency for Development Cooperation (Norad).

“This contest is such a fresh and innovative way to put female condoms higher on the agenda,” said Nina Strøm of Norad. “These films really speak to how empowering and important female condoms are for so many women, men, and young people. I was deeply moved.”

Beatrijs Janssen, communications officer from UAFC said the contest adds to the growing interest in female condoms. “We’ve made significant progress generating awareness and expanding female condom availability in recent years. Global distribution has more than quadrupled since 2005. These films will help add to this positive momentum and provide evidence that female condoms are indeed powerful, pleasurable, and in demand.”

The contest entries ranged from humorous exchanges on the value of condoms to thought-provoking examples of how woman-initiated protection can be vital for health and well-being.

PATH is an international nonprofit organization that transforms global health through innovation. PATH takes an entrepreneurial approach to developing and delivering high-impact, low-cost solutions, from lifesaving vaccines and devices to collaborative programs with communities. Through its work in more than 70 countries, PATH and its partners empower people to achieve their full potential. For more information, please visit www.path.org.

The Universal Access to Female Condoms (UAFC) Joint Programme started in 2008 with the goal of making female condoms accessible, affordable, and available for all. UAFC aims to contribute to a decrease in new HIV infections, other sexually transmitted infections, and mistimed and unwanted pregnancies, and to enable women to exercise power over their own sexual and reproductive health. The program is an initiative of the following four organizations in the Netherlands: Oxfam Novib, Rutgers WPF, i+solutions, and the Netherlands Ministry of Foreign Affairs.

Stories from Your Chosen Family

By Indigo Quashie   Hey advocates,   In celebration of the...
Read more...