Join us NOW to override the governor's veto of HB 4096 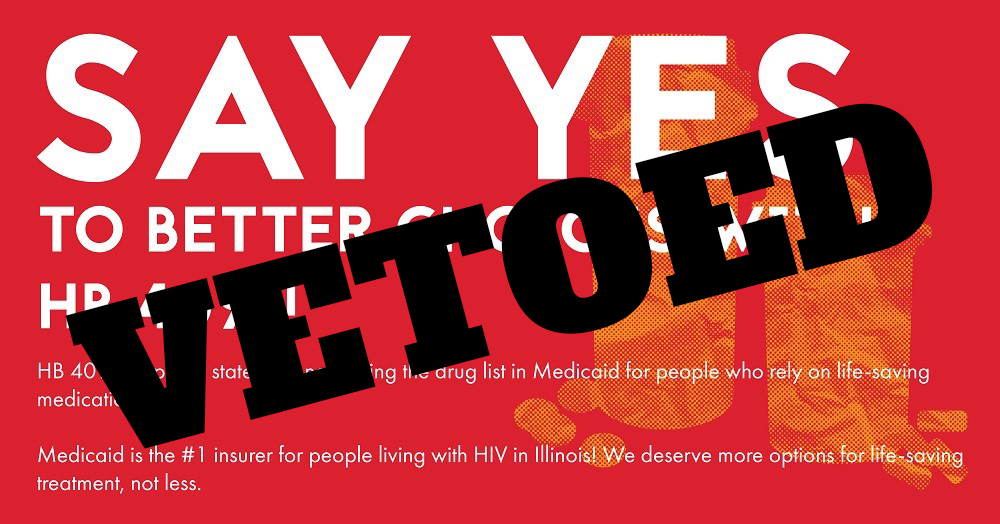 Today, the AIDS Foundation of Chicago (AFC) is deeply disappointed that Gov. Bruce Rauner is playing political games with the lives of millions of Illinois residents who rely on the Medicaid program for access to their lifesaving medications, including people living with HIV.

Gov. Rauner issued a veto Monday, Aug. 20 of HB 4096, which seeks to prevent rationing of health care by the state. The bill would block an effort by the state to require Medicaid managed-care organizations (MCOs) to use a single Preferred Drug List (PDL).

PDLs establish which drugs are available to patients without prior authorization or other utilization controls. Today, Medicaid MCOs may institute their own unique PDLs, which are nearly always more generous than the state’s fee-for-service PDL. Illinois in 2017 proposed requiring all MCOs to follow the state’s stingier fee-for-service drug list, which would institute barriers to care for millions of Medicaid recipients by limiting the number of drugs they could access.

The bill was sponsored by Rep. Greg Harris (D-Chicago) in the House, where it passed 70-31, and by Sen. Heather Steans (D-Chicago) in the Senate, where it passed 47-9 with bipartisan roll calls.  AFC pledges to work closely with legislators to override the Governor’s veto during the fall veto session, scheduled for November 2018. Just one additional vote is needed in the House to overcome the veto: the Senate previously passed the bill with a veto-proof majority.

Under a single PDL, Illinoisans living with chronic illnesses like cancer, HIV, mental health challenges, opioid dependency, diabetes, hypertension and many other diseases would be forced to put important health care decisions in the hands of the state instead of between patients and their health care providers. A single PDL would also impose more burdensome administrative requirements for prior authorizations on providers and increase nonadherence to medication for patients, because it creates unnecessary obstacles to care. A single PDL is not practical, and it dangerously obstructs a patient’s ability to adhere to the care recommended by their health care provider.

The state’s proposal is particularly harmful for people living with HIV, as the state allows direct access to just two single-tablet HIV medications, while all the MCOs have a least five of the six on formulary.  One-pill, once-a-day single-tablet medications promote adherence to HIV treatment, which is vital for maintaining the health of people with HIV and preventing transmission of HIV. Click here to explore AFC’s MCO HIV drug guide.

Additionally, HB 4096 would make transparent the process in which recommendations are made to the Department of Healthcare and Family Services (HFS) on which drugs are included on the state’s PDL.

Illinois is currently the only state in the nation with a closed, secretive Drug & Therapeutics (D&T) Committee, which removes a critical avenue for patients and providers to advocate for access to medications. The bill would subject the D&T Committee to the Freedom of Information Act and the Open Meetings Act.

“Gov. Rauner is using his executive powers to restrict access to critical medications for millions of Illinois residents. The governor’s veto will result in fewer people living with HIV on Medicaid achieving viral suppression and will undoubtedly result in more people becoming HIV-positive, moving us further away from our goal of reaching zero new transmissions of HIV by 2030,” said John Peller, CEO/President of AFC. “We will not sit idly by and allow artificial administrative barriers to lifesaving medications to be erected. We will work diligently this fall to secure the votes needed to override the Governor’s veto during veto session,” says Peller.

Join us in this effort by signing our petition telling legislators to override the governor’s veto of HB 4096.