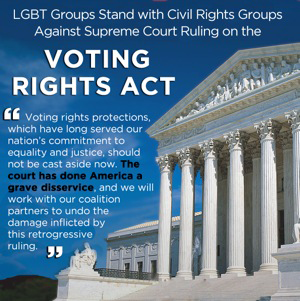 Washington, DC – Today, the Supreme Court struck down a central part of the Voting Rights Act, invalidating crucial protections passed by Congress in 1965 and renewed four times in the decades since. The sharply divided decision will significantly reduce the federal government’s role in overseeing voting laws in areas with a history of discrimination against African-Americans.

We, America’s leading LGBT advocacy organizations, join civil rights organizations – and indeed, all Americans whom this law has served to protect – in expressing acute dismay at today’s ruling. Not only had Congress repeatedly reaffirmed the need for this bedrock civil rights protection, but authoritative voices from across America had filed amicus briefs urging the court not to undermine the law: the NAACP; the American Bar Association; the Navajo Nation; the states of New York, California, Mississippi and North Carolina; numerous former Justice Department officials charged with protecting voting rights; dozens of U.S. senators and representatives; and many others.

These varied and powerful voices attest to the self-evident reality that racial protections are still needed in voting in this country. As recently as last year’s elections, political partisans resorted to voter suppression laws and tactics aimed at reducing the votes of people of color.

Voting rights protections, which have long served our nation’s commitment to equality and justice, should not be cast aside now. The court has done America a grave disservice, and we will work with our coalition partners to undo the damage inflicted by this retrogressive ruling.