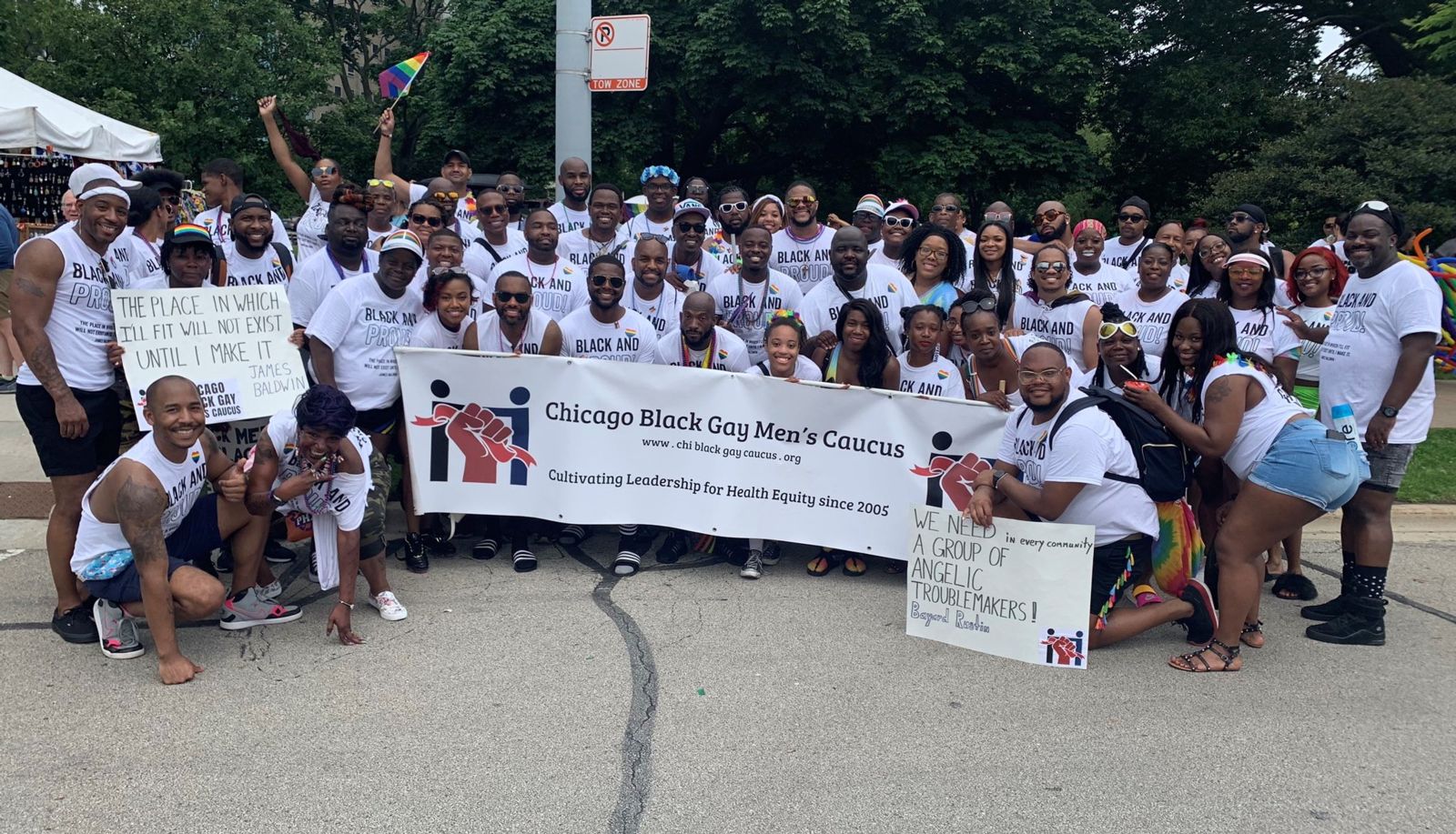 In the summer of 2005, party promoters, bar and bathhouse owners, government representatives, community leaders, health providers and Black gay, bisexual and same gender loving men convened at what was formerly the Ramada Inn on 47th Street and South Lakeshore Drive to address a dire need.

A few months earlier, the Centers for Disease Control and Prevention (CDC) released a report on HIV prevalence in five cities. The report shared findings from a survey that found 46% of the Black gay, bisexual and same gender loving men who participated were living with HIV. Most of those men were also not aware of their HIV status and therefore not linked to care. Although Chicago was not included in the survey, the report set off metaphoric alarm bells.

“That was kind of a national wake-up call to Black gay men and the HIV community...that we had missed the boat with this population,” said Keith Green, co-founder and current vice board chairman of the Chicago Black Gay Men’s Caucus and Assistant Professor at Loyola University. “We needed to do more and figure out different ways to intervene.”

In response to the report, staff at the Chicago Department of Public Health worked with community leaders to convene a gathering with business leaders, government representatives, community members, providers and more to collaborate on possible interventions. In a large conference room at the Ramada Inn, upwards of 50 people from various sectors listened to speeches, reviewed the CDC data and then closely collaborated to identify and fill gaps in outreach to Black gay, bisexual and same gender loving men locally. Because of the diversity of stakeholders in the room, the people gathered were able to collaborate and act to fill both structural and community-level gaps, such as access to testing and condom distribution.

As time went on, the meetings and direct outreach continued. Community leaders began to recognize that the work needed to be continued and spearheaded by those outside of the health department. That’s when the idea of an organization led by and dedicated to Black gay, bisexual and same gender loving men surfaced. The Chicago Black Gay Men’s Caucus (CBGMC) was founded the same year to continue HIV prevention, build community and nurture leaders who could sustain the movement.

“CBGMC’s legacy has always been its unique role in HIV prevention and education across the Black gay community,” said Craig W. Johnson, current AIDS Foundation Chicago (AFC) board chair and former Caucus board chair. “Their work has involved testing, community building, advocacy, innovative programming and community outreach to reduce the significant disparity of HIV transmissions and AIDS-related diagnoses among Black men in the Chicagoland area.”

One of the ways the Caucus has greatly contributed to ending the HIV epidemic locally is through increasing access to HIV testing and other resources through advocacy and events.

Utilizing its ability to convene stakeholders and act on community feedback, the Caucus co-hosted a community town hall at Malcolm X College with Illinois Congressman Danny Davis’ office, including the late Ben Montgomery. This conversation paved the way for the creation and passage of the African American HIV/AIDS Response Act and Fund in 2006. The fund continues to provide support for HIV prevention and care services that support the well-being of Black communities throughout the state.

“HIV prevention and care are still central to what we hope to accomplish, but health equity is a broader mission that is the result of our work in the community,” said Lora Branch, Caucus board member and Senior Director in Government Affairs at Gilead Silences.  “We really work to highlight some of the upstream causes of why so many men are disproportionately impacted by HIV and so many other health issues. Our mission now is to address all of the causes.”

Some of those causes are detailed in the Caucus’ innovative Prosperity Project, a community-informed needs assessment and strategic plan based on interviews with 200 Black gay, bisexual and same gender loving men. Released in 2020, the project identified eight social determinants of health, environmental and systemic factors like access to financial resources that impact a person’s health. By addressing these social determinants of health through programming and more, the Prosperity Project is helping end the HIV epidemic and advance health equity by equipping Black gay, bisexual and same gender loving men with all of the resources that impact their well-being.

Building transformative leaders in and beyond Chicago

True to its initial mission, the Caucus has also supported the development and growth of leaders across the nation who ensure there are Black gay, bisexual and same gender loving men in positions of power and influence advocating for their well-being.

One such leader is Ariq Cabbler, who founded Brothers Health Collective, another GTZ-IL partner advancing health equity. Based on the South Side, Brothers Health Collective provides residents in the South Loop and Bronzeville access to COVID-19, HIV, STI and Hepatitis C testing locally. Ariq is just one example. Thanks to innovations like the Caucus Corps— the Caucus’ membership network for Black gay, bisexual and same gender loving men in Chicago— hundreds of others are continually offered access to training, resume-building and more to support them in becoming advocates for themselves and their community.

“Our legacy is our people,” Lora said. “We can look around and name names. There are people who started off as business owners or folks who were just dipping their toes into the HIV community who now run organizations dedicated to that, who now sit on boards of directors and make major decisions, who now live in D.C. and work in the past and present to advise policymakers. We’ve built leaders and we’re going to continue to do that.”

The Caucus changed the narrative for Black gay, bisexual and same-gender loving men in Chicago by advocating for their meaningful involvement and demanding safe, affirming spaces.

“There’s a lot of different organizations that serve us that aren’t reflective of the Black queer diaspora in many ways, but as long as there is a Caucus around or a body of community members that will advocate for queer Black men, there’s a voice at the table,” said Brandon Wright, Caucus Program Coordinator. “There’s someone there to ensure health equity.”

Although there are still some challenges, particularly around the creation and continuation of safe, affirming spaces for the city’s Black queer men, the Caucus remains one of the only organizations dedicated to the well-being of Black gay, bisexual and same-gender loving men specifically. As we wrap up Pride month, the Caucus is truly an organization to celebrate and support throughout the year.

To support the work and mission of the Caucus, donate today.

Are you a Black gay, bisexual or same gender loving man looking for community? There are several ways to get involved with the Caucus and find resources. For up-to-date information on the latest happenings, make sure to follow the Caucus on Instagram and Facebook.

Categorized under Advocacy, Chicago, Illinois and Inside Story.

Representing the South Side in Springfield at HIV Advocacy Days

by Jasmine Tucker, AFC Associate Board Co-chair and HIV advocate As I was riding the Pink Line...
Read more...