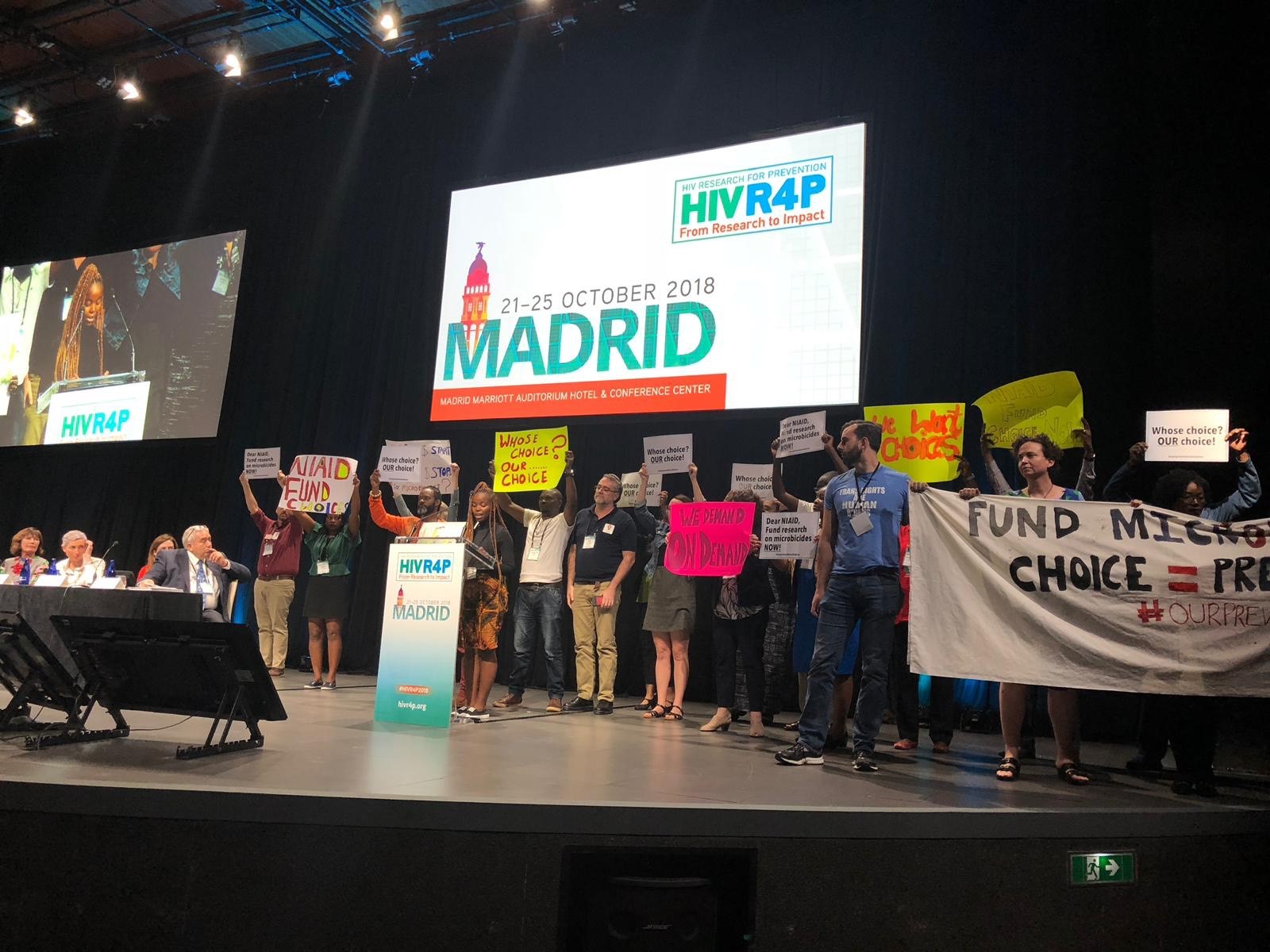 Holding signs that said, “Whose choice, our choice?” And “Dear NIAID, Fund microbicides NOW!”, the group took the stage during the opening ceremony for the meeting, highlighting one of several funders present at the meeting, where there is a strong emphasis on long-acting prevention tools versus daily or monthly tools as solutions.

“We are here because previous calls to ensure that NIAID and USAID continue to support research on microbicides that are short-acting and user-controlled has totally ignored the vast majority of feedback they themselves solicited last year,” said Jim Pickett, Chair, International Rectal Microbicides Advocates, whose group just released the new report Whose Choice is it Anyway?

“NIAID is about to issue its funding opportunity announcement (FOA) that will indicate priorities for the next HIV prevention network. They have a chance to clarify that they respect what women, gay men, and other men who have sex with men, researchers and other stakeholders have been demanding: choices that aren’t all long-acting or systemic. We are here to ensure that research serves the people with products they want, not simply what those in power want to develop.”

In 2016, total global investment in microbicide research and development came to $167m, of which $97m came from the US National Institutes of Health (NIH)—nearly 60 percent of the total. The end of NIH funding for microbicides would devastate much of the promising research on non-systemic HIV prevention options being presented at HIV R4P.

The decision to turn away from microbicides is also self-defeating given the status of dapivirine ring, which is currently under regulatory review, and has demonstrated efficacy among women who use it.

Lilian Benjamin Mwakyosi, a young doctor and advocate from Tanzania, remarked, “We have been preaching that one size does not fit all—in HIV prevention—for quite some time. It is high time that we invest in the options that people desire, which includes microbicides and other non-systemic options.”

Categorized under Advocacy, International and Prevention.

To improve awareness of PrEP among Chicago’s Black cisgender women and the providers who serve...
Read more...

The AIDS Foundation of Chicago (AFC) is pleased to announce that we were recently awarded a grant from...
Read more...