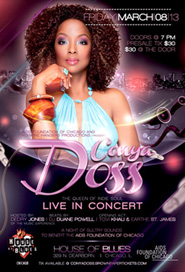 “Queen of Indie Soul” Conya Doss to perform Friday, March 8 at the House of Blues to Raise Awareness about HIV/AIDS

CHICAGO – One of Chicago’s favorite soul artists, multi-award winning songstress and “Queen of Indie Soul” Conya Doss, will perform on Friday, March 8 at the House of Blues to benefit the AIDS Foundation of Chicago. Tickets available for $30 at http://conyadoss.brownpapertickets.com.

Conya released her 6th album, A Pocketful of Purpose, in 2012 and was a Female Vocalist of the Year Finalist for the SoulTracks Readers’ Choice Awards.  She’s been on the move with performances and philanthropy including BET's Rap-IT-Up Program which targets teens for HIV prevention. Now she’s coming to Chicago to make her voice heard in support of the AIDS Foundation of Chicago’s “Change My Story” campaign which encourages communities of color to change their own story – to get tested, get care and get involved.

Conya’s performance will cap a two-day observance of national Women and Girls HIV/AIDS Awareness Day (March 10) by AFC. HIV/AIDS remains a serious public health issue for women and girls. In 2010, they made up two-thirds of people who got the disease by having heterosexual sex. African-American women and girls continue to be disproportionately affected. Their rate of becoming infected with HIV in 2010 was 20 times that of white women and girls.

On Thursday, March 7, from 11 a.m. to 5 p.m., AFC will host “Change My Story: Healthy, Whole and Happy Wellness Fair” at Chicago State University (9501 S. King Drive). The free event invites women and girls from across Chicagoland to learn how to live a healthier life: mind, body and soul. (Conya will make an appearance at a 2 p.m. workshop session.)

The benefit concert will take place Friday, March 8 at 7 p.m. at the House of Blues (329 N. Dearborn Street) and also feature host Dedry Jones of The Music Experience , sounds by DJ Duane Powell and opening performances by Tovi Khali and Erthe St. James. DJ Jazzy Jeff describes Conya as “a whole lot of soul in a beautiful package...a must hear.” Don’t miss this special evening of sultry sounds!

To schedule an interview or media appearance with Conya Doss, please contact Johnathon Briggs at 312-334-0922 or at jbriggs@aidschicago.org.