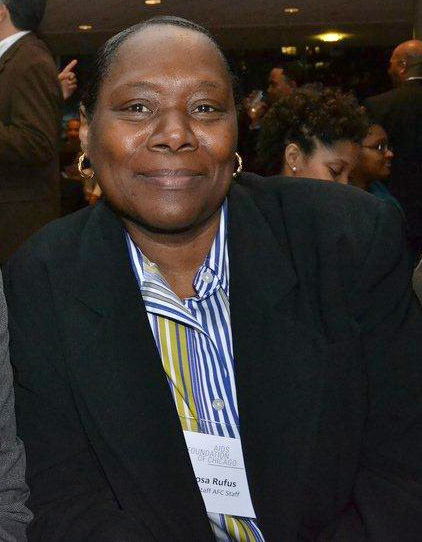 Rosa Rufus never said a bad word about anyone.

She always had a smile on her face.

Such are the memories shared as her friends and colleagues at the AIDS Foundation of Chicago reel from the loss of her presence.

Rosa Lee Rufus died in the early morning of Friday, Jan. 18. For eight years, Rufus worked in the finance department for the AIDS Foundation of Chicago (AFC), ending her career as contracts coordinator. She was a quiet and deeply private person, but those who knew her remember her as a remarkable and sweet woman who loved to read, cook and spend time with her family.

Schad supervised Rufus, who worked with client agencies funded by AFC. It was Rufus’ responsibility to review, audit and file forms documenting proper use and allocation of funding. She was very attentive to detail, helpful those who needed assistance and calm under pressure, Schad said.

“Even when there were disagreements, as happens in the workplace, it was like water off a duck’s back,” he said.

She carried herself with a quiet integrity, Schad said.

For Jessica Sianez, who worked near Rufus in the finance department, the smell of Rosa’s lavender lotion was always a pleasant sign she was there. Sianez remembers the little things that would spur conversations, such as books, “American Idol,” motherhood and cooking.

Rufus loved to cook and was known for her spinach lasagna, a highly-requested item at departmental potluck dinners. Arisbel Cruz-Lewandowski, a grants and contracts manager, said they often traded recipes, and though they didn’t work closely together, she was impressed by Rufus’ constant and cheerful demeanor.

“Rosa’s food would make you moan out loud at the first bite … She wasn’t one to toot her own horn though, she would just graciously say thanks and give up the recipe when I would ask, though it never quite tasted like hers,” Kilpatrick said.

She went on: “We would trade trashy love novels, debate the state of the Black Man, discuss tactics on surviving a teenager … She was always willing to listen and give a little insight. I will miss our talks.”

Deena Mansfield, another contracts coordinator for AFC, worked with Rufus for eight years. She was hired on just before Rosa and took her out to lunch on her first day of work. The two women bonded over the television shows “American Idol” and “X Factor,” Mansfield said.

“Rosa was a sweet, dear person that I will miss very much,” Mansfield said.

Perhaps her most lasting legacy at AFC will be her charitable spirit and her unwillingness to speak ill of others.

“She never seemed to concern herself with the gossip world,” said Angela Jordan, AFC’s intake and referral coordinator. “That’s what I appreciated most about her.  If I shared something with her, I wasn’t afraid it would hit the rumor mill.”

Though quiet, she was engaging and funny when talking with her work friends.

“Wow, I still can’t believe she’s gone,” said Nicole Doss, a DRS/Part A training associate for AFC. “Rosa was very kind, reserved and hilarious when you got to know her.”

Phyllis Coprich, who works in AFC’s Care department, summed up the sentiments of many AFC staff: “I didn’t have much contact with Rosa outside of AFC. But in the time that I have known her I found her to be a very beautiful soul.”

On Thursday, the day before Rufus died, Fonstella Ross went to the hospital to check in on her.

“I was going to say hi, not goodbye,” said Ross, a gift entry manager at AFC, who remembers her friend Rufus as a very kind woman who valued her privacy and loved her family.

During that last visit, Rufus was too weak to speak at that point, but raised her hand as if to say hello.

“She was a beautiful, private person,” Ross said, “and she will be missed.”

***
Rosa Lee Rufus is survived by her daughter, Latonya Rufus.

The homegoing celebration arrangements for Rosa Lee Rufus are as follows: There will be visitation from 7 to 9 p.m. on Friday, January 25, at the Leak & Sons Funeral Home, 7838 South Cottage Grove, Chicago. The wake will be held Saturday, January 26, from 4 to 5 p.m. at the same location, followed immediately by the funeral service. The funeral procession will depart from Leak & Sons Funeral Home at 8:30 a.m. on Monday, January 28, for the 9 a.m. internment at Beverly Cemetery at 12000 South Kedzie.

AFC is heartbroken to learn that long-time HIV advocate Ben Montgomery passed away. Ben was a campaigner...
Read more...