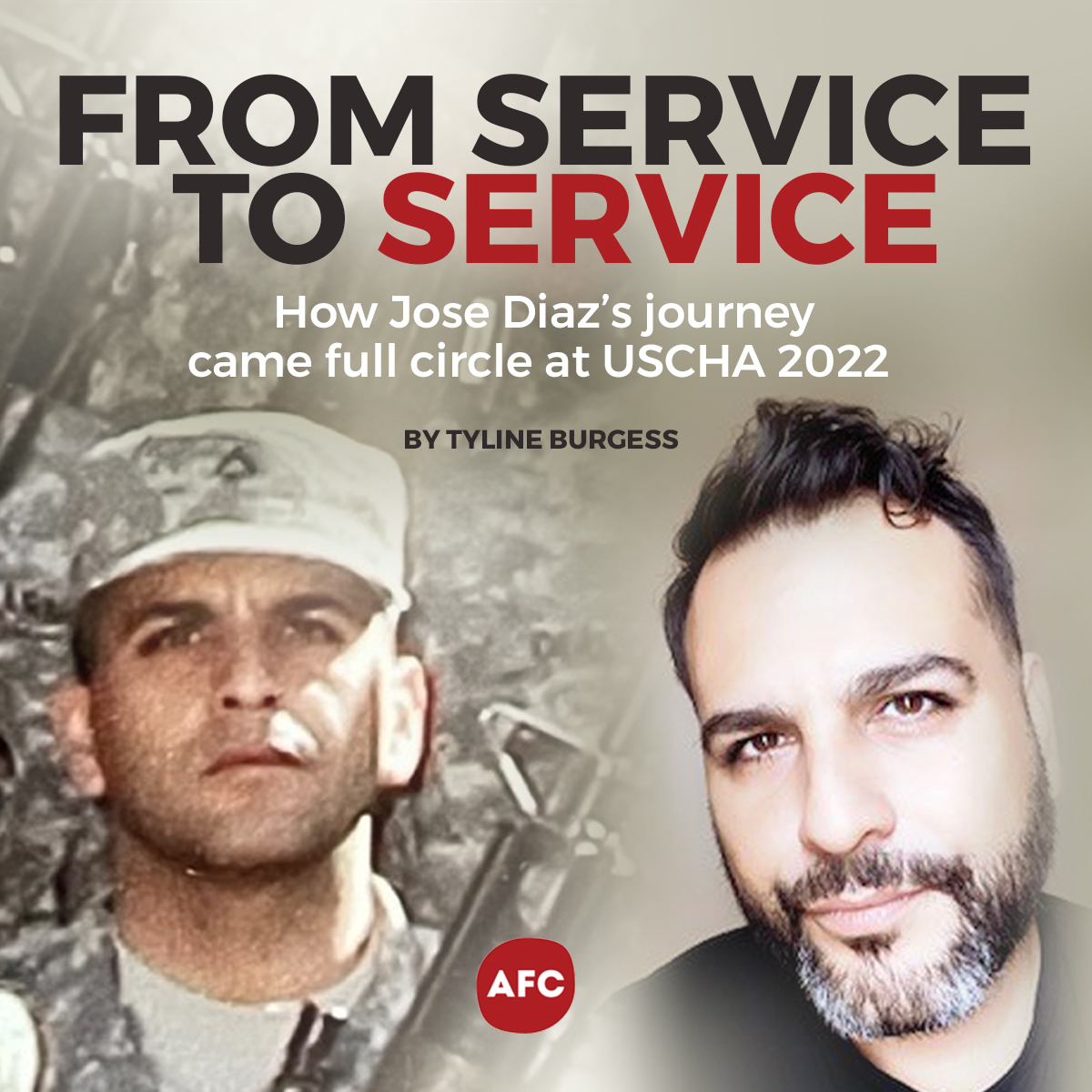 This year’s US Conference on HIV and AIDS was held on the island of Puerto Rico in its capital city, San Juan. The island is rich in history with San Juan (founded in 1521) being the oldest city in the US territory and the island itself, after being colonized by Spain and later the US (as a result of the Spanish-American war), is considered by some to be the oldest colony in the world. As an unincorporated US territory, all Puerto Ricans have US citizenship with Puerto Ricans enlisting in the military since 1899 and being deployed in every major US war since World War I. AFC’s Jose Diaz, himself an Army veteran, saw the island hosting the USCHA conference not only as a huge first for Puerto Rico but as a full circle moment for him returning on behalf of AIDS Foundation Chicago to the island and city he fled in hopes of better treatment and services after receiving a positive HIV diagnosis over a decade ago.

In December of 2010, Jose Diaz was living in San Juan after being honorably discharged from the U.S.  Army reserves. Just a few months prior, Jose had been living in Georgia as an active member of the U.S. armed forces. Being openly gay, Jose says he was forced to live a closeted existence and was outed after an “incident” with another party. After a lengthy investigation Jose says he was honorably discharged and was told he could reenlist in 6 months. It wouldn’t be until September 2011 that the U.S. military’s “don’t ask, don’t tell” policy would be overturned allowing for LGBTQ+ people to serve openly in the military – this left Jose feeling he had gotten off relatively lightly, despite the discriminatory nature of the policy. He returned to Puerto Rico intending to reenlist for service after the six months were over. Life for Jose, however, would take a dramatic turn.

Jose recalls vividly the day he learned of his HIV status, “The day I was told, I entered a small room with a nurse and was simply asked ‘what do you think your results could be?’ I assumed it was negative, the nurse, however, stated, ‘unfortunately you tested HIV positive.’” The news left him mentally blank. He began to descend internally as memories of frail, ill, and dying friends played in his mind; it was a fate he thought he’d now share. “I walked out without seeing a mental health specialist, just some condoms and pamphlets for local resources.” Jose explained that making it through his twenties without contracting HIV lured him into a false sense of security which made the newfound knowledge of his status doubly hard to deal with. Contracting HIV in his 30s seemed to heighten the internalized shame and stigma sending him into depression.

As Jose’s mental state spiraled to new lows, he began to withdraw, first from family and friends and finally from his job. “I was scared to tell anyone, to touch anyone or anything, to expose my depression,” Jose expressed. “I was losing weight and was not feeling well, which heightened my fears of being sick and getting worse.” After mustering up the confidence to visit his primary care physician and disclose his diagnosis, Jose received yet another blow from the doctor; he informed him that he couldn’t assist him, and he would have to change his insurance to another doctor. “The nurse provided me with information for the local public HIV clinic and I was transported a few miles away.”

During Jose’s first attempt at visiting his new clinic, he entered the facility where in the waiting room he saw an array of individuals who were likely experiencing significant societal stigma due to substance use, sex work and other situations. Overcome with emotion he turned around and exited without being seen. Jose made a second attempt at a different clinic several miles away. He was informed that the next available appointment wasn't for another 3 months; this disappointed him, but it did not deter him this time. He took the appointment and waited the 3 months, during which time his depression worsened., “I ended up losing my apartment and moved into my grandparents' home,.” Jose explained.

Once there the pressure of keeping his truth to himself became overwhelming, so he confided in a trusted aunt. Jose felt a special closeness to her because she as a trans woman was also member of the LGBTQ+ community, so he disclosed his status, believing he could trust her. That trust, however, was betrayed when she revealed his secret to the entire family. The betrayal was not meant in malice and his family came to his support. “To my surprise, they were supportive, but my depression continued since I had not seen a doctor in months at this point. As I waited for my appointment, a friend of the family mentioned an agency called Iniciativa Communitaria,’ a local resource in Hato Rey, not listed in my pamphlets.” It was there at Iniciativa Communitaria, that he was prescribed his first bottle of Atripla and was told that his diagnosis was not a death sentence. “I was able to be seen the same day as a walk-in... they did all my labs and took 18 vials of blood. I was even given a letter stating that I had "a special medical condition" that would allow me not to pay for over-the-counter medications.” By this time, it had been months since being diagnosed and he knew that he had to move to Chicago, a city he knew well for better resources.

Once in Chicago Jose called every agency that he found that offered medical and behavioral health assistance. “The first agency I called was AFC. AFC referred me to Erie Family Health Center for medical and TPAN for a newly diagnosed group. Erie felt like home even though it was located in a dark basement at the time and the TPAN group was empowering and helped me out of my dark place. I must give TPAN quite a bit of credit,” Jose recalls. “They gave me all the rules and you know any legal and medical advice that I needed. And we worked as a community, as a group. It was extremely helpful… the therapy I needed.”

With the help of former AFC staff William Mitchell and Charlotte Detourney, Jose was able to complete his AIDS Drug Assistance Program applications and even able to pay for a root canal/crown. “Technically, I was experiencing homelessness when I came back to Chicago; I was living with friends and in need of services.” Jose says that during this time of growth his depression subsided but did not cease. The stigma of living with HIV still lingered. He was able to attain proper treatment and even began dating again but found disclosure to be daunting. “I was in a relationship with someone for almost two years and did not disclose my status. He remained negative but it’s still something I’m not proud of.”  Jose continued, “Once I resettled my emotional and spiritual self, I was able to focus on getting my life on track. At that time, I was a restaurant manager, so I thought, you know, I need to get back to school. So, I went back to school for social work, I completed an AA, BA, and a MA degree in 5 years and began my work in social services.”

Jose’s negative experience in Puerto Rico a decade ago is what drives him today. The lack of access to competent care and adequate treatment pushed him to Chicago where at AFC and TPAN he met social workers who inspired him to go into the field himself. When it was announced that the 2022 US Conference on HIV and AIDS would be held in San Juan, Jose leaped at the opportunity to attend as an AFC representative. Stepping onto the island he loved and into the USCHA conference as a part of the solution to a problem he understood all too well was emotional for him.

“My main takeaway from the conference was the importance of advocating for yourself. I laugh when I think about the fact that I was here 10 years ago fleeing Puerto Rico because they didn’t have the services I needed, I didn’t know what questions to ask or how to navigate the system, and here I am today guiding people through it.”

Jose never returned to the military assuming his time in service was over. While enduring the uphill battle to find the help he needed, Jose never would have imagined in his darkened state of depression years ago that his diagnosis would take him on a journey from military service to social service. This year's USCHA conference was a full-circle moment in Jose’s journey, from service to service.