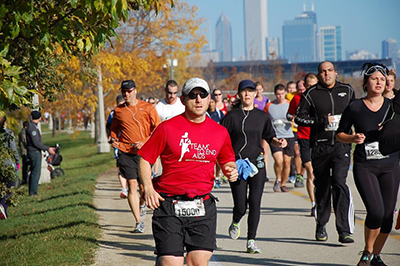 As the AIDS Foundation of Chicago (AFC) celebrates its tenth year of fighting HIV/AIDS with endurance sports, Peller is doing the same.

He joined the National AIDS Marathon Training Program in 2003 to prepare for his first marathon. Athletics had never been his forte in high school or college, but the urge to run 26.2 miles constantly nagged at him.

In 2000, Peller competed in the Alaska AIDS Vaccine Ride, organized by Pallotta TeamWorks, which launched cyclists over 350 miles from Fairbanks to Anchorage. The subsequent year he found himself on a bike again, peddling from Montreal to Portland, Maine.

The AIDS Vaccine Rides ceased to exist after 2001, but Peller was just warming up. He was looking for something else to do, something else to push him mentally and physically, something that would put him across the finish line of a long-distance footrace.

Then he discovered an endurance training program that benefited AFC.

“As a gay man” Peller said, “I’ve lost a lot of friends to HIV, and was really aware that this was an issue that we, as a community, needed to address—and still need to address. The opportunity to both fundraise and train was a good combo for me.”

At the time, Peller was doing policy work in Illinois, but he had never heard of AFC and was largely unfamiliar with the AIDS movement in Chicago. Eager to get involved, Peller registered for the National AIDS Marathon Training Program, the precursor to TEAM TO END AIDS (T2).

From the beginning, he was hooked.

“Group training is incredibly motivating because you’re not just out there running 20 miles in 90 degree heat,” Peller said. “Having friends support you and get you through grueling workouts makes endurance training with AFC unique. There’s a common sense of commitment and cause that brings everybody together.”

And it brought Peller closer to AFC. “This place is doing amazing policy work,” he noted from the outside. Peller was eager to roll up his sleeves and work for the organization, so he sent then-President Mark Ishaug his resume and asked if there were any openings.

Luckily, Peller was patient and a few days later, Ishaug sent him another email with good news.

“That’s how I found the job of a lifetime,” said Peller, with a smile. “I was hired as a state lobbyist for AFC. How many people can go to Springfield and lobby on behalf of an organization like this, for a cause like this? It was truly a gift.”

Peller, now AFC’s vice president of policy, continues to participate in T2, pushing himself to new athletic heights every year.

“I’ve learned so much about myself from a decade of participation. And I’m just doing things that I could never do before. I never thought I could run a marathon, let alone five or six.”

This year he’s upping the ante, training for Steelhead, an Ironman 70.3 triathlon in Benton Harbor, Michigan.

But sport is just a portion of his athletic career. The money he raises for AFC is the other part.

It’s difficult to raise money for programs like policy and advocacy, Peller stated. Governments don’t support this kind of work, and foundations are often skittish about sponsoring advocacy because they don’t want to align themselves with special-interest lobbyists. But this work is paramount, and “we can make vital changes to the quality of life for people living with HIV/AIDS.”

Peller is quick to point out that AFC spearheads projects that are overlooked across the country. Currently, the organization provides leadership on the female condom promotion campaign, and Jim Pickett, director of prevention advocacy and gay men’s health, is doing important work on rectal microbicides.

“All of this is made possible by revenue generated by T2 and other fundraising projects,” Peller said. “T2 is fueling initiatives that have no other source of funding.”

That’s what makes AFC and endurance sports a perfect match: Through marathons and triathlons, AFC is able to fully live in its mission of leading the fight against HIV/AIDS.

And for the past 10 years, Peller has been running stride-for-stride with the organization, raising money, affecting policies, and winning medals.

Join Peller on T2 this year and register for your favorite endurance event!