Do you believe in miracles? One AIDS Run & Walk Chicago team does. Team I Believe in mIRAcles is rallying around their friend Ira Katzman, who will run his first 5k on Sept. 26 after experiencing brain cancer and a series of subsequent surgeries that kept him in the hospital for a year. 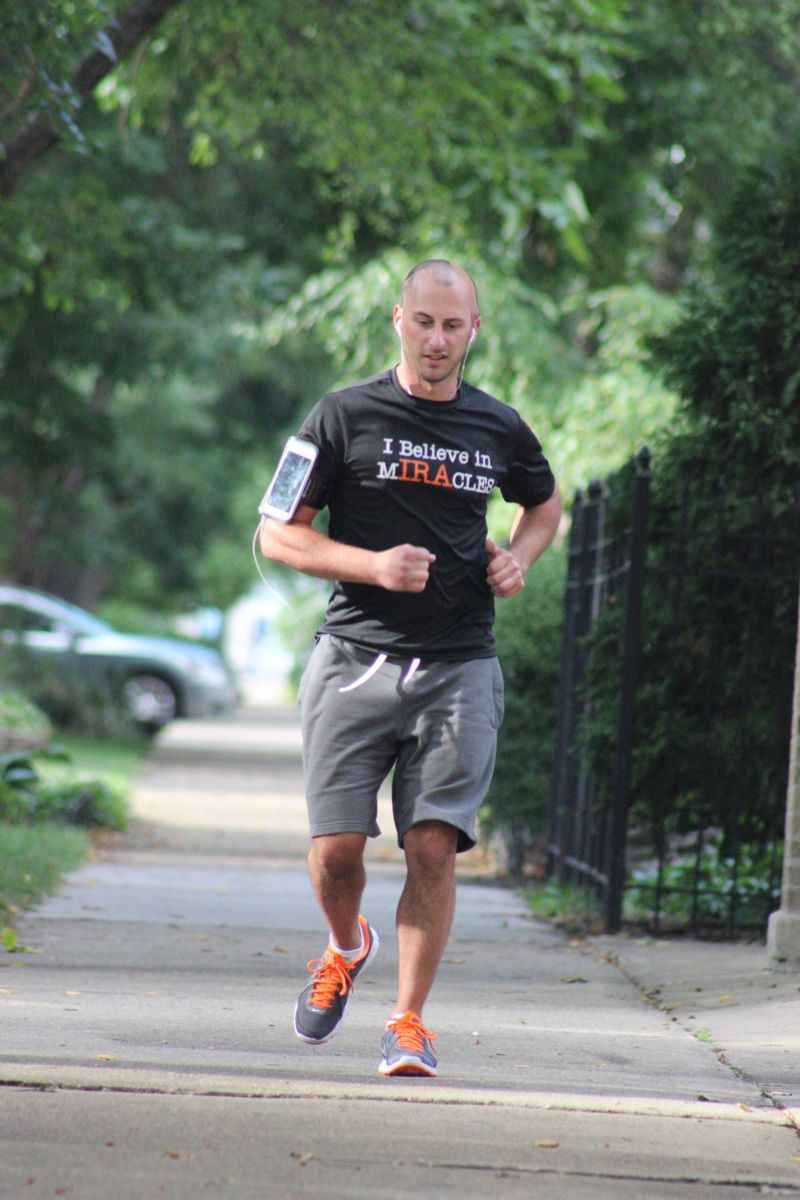 Two years ago, Ira was a “happy camper.” He went to the gym regularly; he was a personal injury attorney with his family practice; he was enjoying life with his husband, Casey.

But then on Sept. 17, 2013, Ira’s life changed. He was working out at the gym when his right arm went completely limp. He went home and still wasn’t feeling right, so he headed to Northwestern Memorial Hospital. As he was walking in to the emergency room, he collapsed.

When he awoke two days later, his body had been through a lot. The doctors discovered a brain tumor and removed it. He recovered well with support from his friends and family, but then a series of infections in his brain resulting from the initial surgery took him back and forth from the hospital for the next year and a half.

“Ten surgeries, infections, skin grafts, chemo, radiation — you name it, I think I’ve been through it,” Katzman recalled. “In 2014, I spent more time in the hospital than out of it.”

Recovery is a day-to-day process for Katzman now. He goes to a trainer to help the process and is figuring out his next step toward getting back into the workforce. “I’m just trying to have fun and reclaim where I was.”

But he’s working to overcome those challenges. They’re getting better each day. AIDS Run & Walk Chicago will mark a huge milestone for him when he runs his first 5k since his brain tumor was removed.

“Last week, I ran a complete mile without stopping. I had no idea I could do that, so I feel like I am a third of a way from completing the full 5k!” said Katzman. He’s training with a couch-to-5k program and hopes to incrementally add distance to his run every week.

Katzman won’t be alone on Sept. 26 at Soldier Field for the event — Team I Believe in mIRAcles, made up of his closest friends, his father and his husband, will be there with them. Together, they’re raising money to support the AIDS Foundation of Chicago (AFC). So far, they have raised almost $4,000 in honor of Katzman’s amazing recovery from one life-threatening illness — and to support continued support for another life-threatening illness, HIV.

“I have many friends — close friends — who are affected every day by HIV. I have a strong connection to our community,” said Katzman. He has shown that commitment through supporting AFC and traveling to Springfield this spring to speak with legislators about HIV funding in the state budget.

But for now, Katzman’s main focus is meeting his personal goal at AIDS Run & Walk Chicago and continuing to raise funds for Team I Believe in mIRAcles.

“I want to go all the way to the finish line — and drink a beer!” joked Katzman.

Support Katzman’s team and make a difference in the HIV epidemic in Chicago. Click here to make a donation.