A Powerful Day, a Call to Action

Linda Coon is the project director of the Families' and Children's AIDS Network (FCAN). She traveled with a group of HIV advocates to Springfield last week. Below are her thoughts on the experience.

"If the choice is her medication or our housing, we will be homeless."

That was an actual quote from an HIV-negative man who was speaking on behalf of his HIV-positive wife last week in Springfield. He was one of a diverse group of advocates who comprised the Families' and Children's AIDS Network (FCAN) action team. The group's mission was to speak with legislators, tell their stories and urge lawmakers to oppose cuts in HIV funding and Medicaid.

I have advocated in Springfield on legislation for more than 30 years. Often, I walk away frustrated or unsure of the real impact. But last week's visit was truly inspiring. Amazingly, we were able to see 16 legislators, eight of whom sit on the House or Senate Appropriations Committees.

With the help of Ramon Gardenhire, director of government relations for the AIDS Foundation of Chicago, our team was quickly oriented to the issues and received a list of legislators to prioritize for our visits.

Our goal was to educate legislators on the toll that the proposed cuts will have on people living with HIV and their families. Almost all of the legislators gave us the time to briefly tell our individual stories!

My role in the FCAN action team trip to Springfield was to organize the participants, secure travel, brief the team on the issues, and represent a nonprofit’s efforts to preserve these vitally needed services.

AFC has urged agencies to form action teams to send to Springfield in the final weeks of the legislative session. I echo this call to action. Do it now. It is not too late to have an impact on the proposed funding cuts! 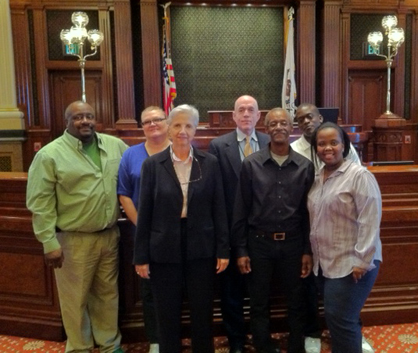 Linda Coon, at center, stands with the FCAN action team.