A Prayer for Courage and Unity 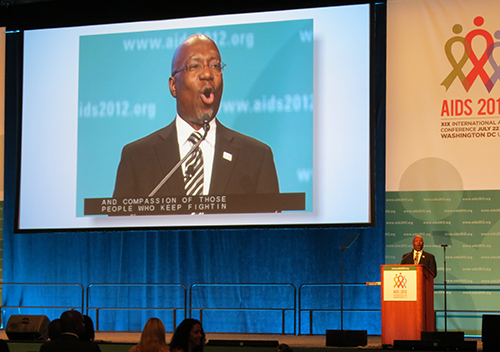 The voice thundered out from the bespectacled pastor to the silent, rapt audience.

“This is our prayer and this is our common desire for AIDS 2012 – that we be united all the world over as never before to truly turn the tide against the HIV/AIDS pandemic,” said Rev. Charles Straight, board member for the AIDS Foundation of Chicago, concluding his convocation.

“Amen,” shouted back thousands of people gathered from all over the world.

And so began the International AIDS Conference (AIDS 2012). For many, the preparation and pre-conference trainings had been underway for days, even weeks. But Sunday night’s opening plenary marked the official beginning of the global event, the conference’s first time on American soil in 22 years. Dignitaries and diplomats addressed the crowd with messages of hope and calls for urgent action.

From World Bank President Jim Kim to Secretary of Health and Human Services Kathleen Sebelius, the message was consistent: We stand at a unique time in history with the scientific tools necessary to end AIDS, but the challenge in implementing those tools remains immense.

“And that’s what brings us together for this important dialogue,” Sebelius said. “This week is a chance for each of us to arm ourselves with the latest science … to learn from each other, and then go back to our communities and countries with renewed energy and determination to finish the job.”

It was a message warmly received by the throngs that had shuffled in the cavernous auditorium, inch by inch, for the opening session. They came from every continent -- scientists, researchers, diplomats, people living with HIV/AIDS – and represented all races and gender identities. Filing in, they murmured and tittered with the tired giddiness of the first overwhelming day. 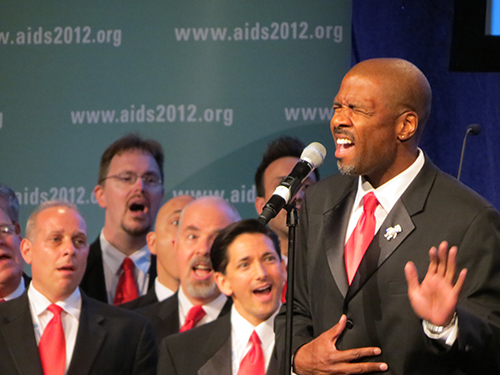 Members of the Gay Men's Chorus of Washington D.C. perform at the beginning of the opening session.

Several of the speakers referenced the scientific breakthroughs of recent years, such as treatment as prevention, male circumcision for HIV prevention for heterosexuals and preexposure prophylaxis. Such advances have led the global effort against the AIDS pandemic to a point of no return, said Diane Havlir, one of the conference co-chairs.

“It would be an extraordinary failure of global will and conscience if financial constraints truncated our ability to begin to end AIDS just when the science is showing us that this goal is achievable,” Havlir said.

As Rev. Straight said to begin the night:

“We stand in need of bigger hearts and stronger conviction to keep advocating for life-giving healthcare, treatments, prevention, housing and other vital services and rights for those battling for survival, liberties and basic human dignity. And we stand in need of a cure.

Divine spirit; Thou who has been a way when there was no way, touch with compassion and great generosity the hearts and minds of decision makers everywhere to use their power and influence to end this pandemic. “