A Quilt of Memories Lives On 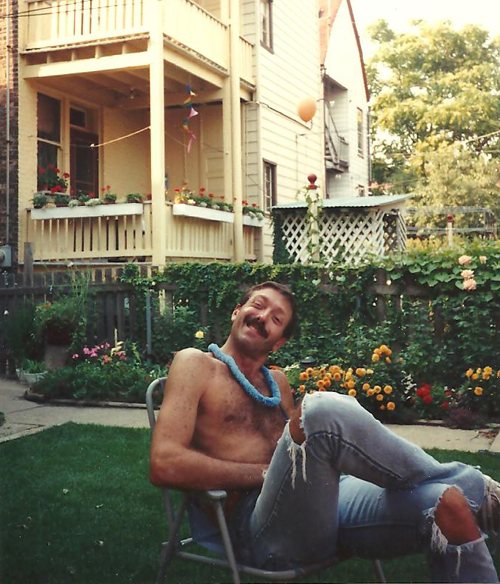 Years ago, Mike Barnes stood before the AIDS Memorial Quilt in Washington D.C. with the love of his life, Martin “Sky” Bixby. They were both moved by the Quilt's powerful testimony.

“He said, ‘I hope someone does that for me someday,’ ” said Barnes, 55, a pharmacist who lives in Lincoln Park.

Bixby, who died of AIDS in 1997, (pictured at right) is now memorialized on the quilt, his panel one of 48,000 others honoring nearly 100,000 lives lost to AIDS. The quilt, a grim and compelling visual reminder of the AIDS epidemic’s toll, will return to Washington D.C. this summer in time for the International AIDS Conference (AIDS 2012).

For those who have suffered tremendous losses — as Barnes has — the Quilt carries their memories forward.

Just this March, Barnes lost another longtime partner, Bart Rarick, to AIDS. Going back to the mid-1980s, Barnes has lost three partners to AIDS-related health problems. And just last year, Barnes was diagnosed as HIV-positive.

“There are days when I don’t want to get out of bed,” said Barnes, still grieving.

Stitching a panel pays homage to those we have loved and lost, Barnes said, and reminds us to do our part to end HIV and AIDS.  He has not yet created a panel for Rarick, his partner for 13 years, but he intends to do so. 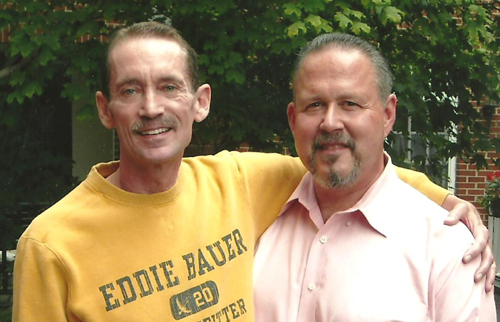 Rarick, a flight attendant, was a handsome and kind man, Barnes said. After his death, other flight attendants and colleagues mailed nearly 300 letters of sympathy and memories to Barnes. They remained unopened.

“The rawness of his death is still very much with me,” he said. “One day, I’ll open them up.”

Bixby had been a “blue collar guy,” a worker in a chrome plating factory and a caring partner, Barnes said. He was diagnosed with HIV in 1995. He died two years later.

With the help of a friend, Barnes stitched a panel in Bixby’s honor.

“It wasn’t so much healing, but it gave me peace to know he wasn’t going to be forgotten,” he said.

Barnes recalled when he first saw the Quilt in Washington on the National Mall.

“It was terribly moving,” he said, his voice breaking with emotion. “Each one of those panels was a life, a life that could have changed the world.”

The NAMES Project Foundation, custodian of the Quilt, will return the Quilt to Washington D.C. this summer for two important events: the Smithsonian Folklife Festival’s program “Creativity and Crisis” and AIDS 2012.

The Smithsonian program highlights the 25th anniversary of the Quilt as the largest piece of community art in the world and contemplates art as a means of healing and bringing communities together. During AIDS 2012 in late July, panels of The Quilt will blanket the D.C. metro area on part of the National Mall and more than 60 other venues.

Go to Quilt2012.org to volunteer and find out more information.