A Revolution of Hope 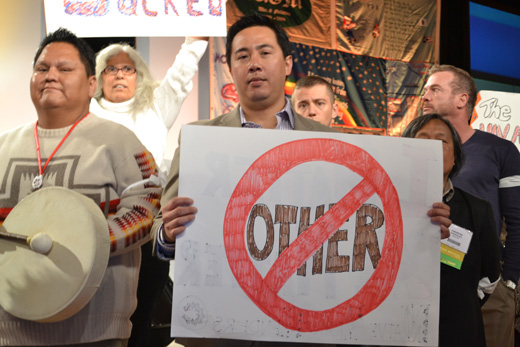 Protestors voice concerns over the marginalization of Asian-Americans, Native Americans and Pacific-Islanders at the United States Conference on AIDS. -- AFC Photo-Ed Negron

Would you care for some revolution with your toast?

Powerful speeches, calls to action, an unexpected protest for justice – this all occurred over breakfast, as the United States Conference on AIDS got off to a rousing start on Thursday morning. Thousands descended upon the Sheraton Chicago Hotel and Towers ready to tackle issues pertaining to young gay/bi men – the focus of this year’s conference.

The messages from the morning’s headline speakers shared a common theme: As a country, we stand at the precipice of ending HIV/AIDS because of recent medical advances. But progress is threatened by partisan politics and the potential slashing of necessary funding, and by schisms within the HIV/AIDS community.

“The great tragedy in all this is that we now have the tools and scientific know-how to stop AIDS in its tracks. … But with our nation’s political and economic climate, sustained progress is in peril,” said David Ernesto Munar, president/CEO of the AIDS Foundation of Chicago, in his opening remarks.

“At stake is whether we march forward as a society to begin to end AIDS,” Munar continued.

Munar had taken the stage to raucous applause to welcome USCA’s participants to Chicago. AFC is serving on the Chicago Host Committee for the annual conference, which is facilitated by the National Minority AIDS Council.

He was followed by Jeff Crowley, the outgoing director for the Office of National AIDS Policy, but not before a group of about 50 organized protestors – mostly Asian-Americans, Native Americans and Pacific Islanders – marched in with signs to a slow and steady drumbeat.

Protestors held signs with words such as “Asians Matter” and “We are Sacred” to send the message that their racial and ethnic populations are being marginalized by the implementation of the National HIV/AIDS Strategy. 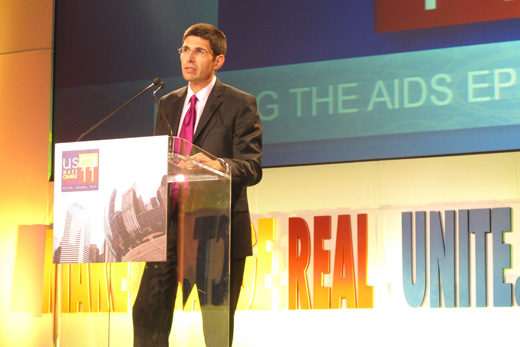 David Ernesto Munar, president/CEO of the AIDS Foundation of Chicago, addresses the crowd at USCA on Thursday morning. -- AFC Photo

After the protestors left, Crowley addressed the audience.

“As most of you already know, I’ve made the difficult decision to leave at the end of the year,” said Crowley, who was instrumental in crafting the first National HIV/AIDS Strategy.

The crowd groaned its displeasure with his pronouncement.

Crowley called on individuals and organizations to ramp up their own efforts to raise funds and mobilize.

“Other than pushing the feds to do more, what is our community doing to make this a new day?” Crowley said.

He also addressed what he perceived to be “growing fault lines” in the HIV/AIDS community, many of them along race and gender lines, as evidenced by the protest just minutes prior. The alarming rise in infections in young gay/bi men of color, and the ensuing response to that data, may leave women with HIV feeling left out, he said.

This was evidenced earlier when a woman in the the protest had held a sign that said "I am not MSM" -- perhaps alluding to the conference being focused on men who have sex with men.

“We all have good hearts but we really must stay together,” Crowley said.

Secretary of Health and Human Services Kathleen Sebelius was the keynote speaker of the opening plenary session. The Democratic former governor of Kansas urged the crowd to support Obama in the 2012 election.

The full implementation of the Affordable Care Act, scheduled to roll out in 2014, is necessary to continuing on the path toward ending AIDS, Sebelius said. The reform will prohibit insurers from denying coverage because of preexisting conditions, expands Medicaid and makes HIV/AIDS medications more affordable for low-income beneficiaries, she said.

“The gaps in coverage will be small cracks -- not gaping holes,” she said.

“This is not a shy group. You are not afraid to make your voices heard in your communities,” Sebelius said. Thirty years ago, when people in the White House would not even say the work ‘AIDS,’ you forced our country to acknowledge and confront the disease.”

She continued: “Today, we need you to raise your voices in your communities again.”