A vital link to HIV care and so much more 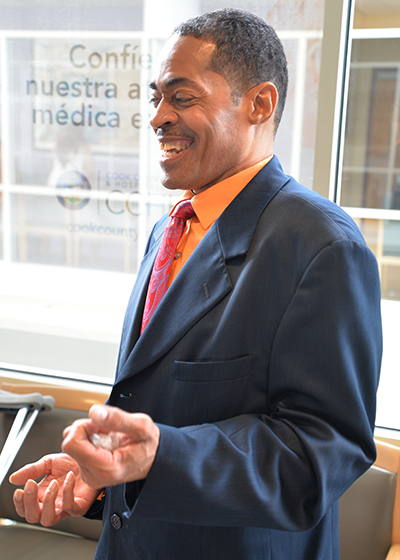 Darren is 56 years old. He walks with the assistance of a walker – the toll that physical labor and illness has had on his wiry frame is obvious, but it does not dampen his energy. Behind his smile are years of hardships. Born and raised in the Chicago area, Darren was one of ten children. His parents divorced when he was three, after his sister was kidnapped walking home from school. As a child he strived for attention, but he was emotionally and sexually abused.

A lifelong hard worker, Darren got his first job at age ten and his first actual paycheck at 15. He has worked as a salesman, bike messenger, furrier, a cable man, and a fork-lift operator. Many of his physical jobs have left their mark; he now has permanent damage to his knee and rotator cuff.

Darren talks wistfully of the past and frankly states, “I am basically alone.” His parents have both been deceased over 20 years. He was married and has two adult children, but no longer speaks to his ex-wife. Diagnosed with HIV in 2005, Darren says, “communicating with people that I have HIV is a problem I have every day.” In fact, only one of his siblings knows his HIV status. Darren has been through so much since then: he’s been homeless, he lost one of his closest friends to HIV, he’s struggled with anxiety and depression, and he has had a series of life-altering strokes in recent years.

Darren’s life has been changed in a myriad of ways through his relationship with an AFC partner organization, the Cook County Health and Hospitals System Ruth M. Rothstein CORE Center, where he receives his medical, dental and psychiatric care. When he enters the CORE Center’s airy, open lobby, it is like watching a celebrity interact with fans — everyone in the building knows Darren, and he exchanges many friendly greetings. Darren proudly states, “the CORE Center became my family.”

The person Darren is happiest to see is Bukola, his case manager. 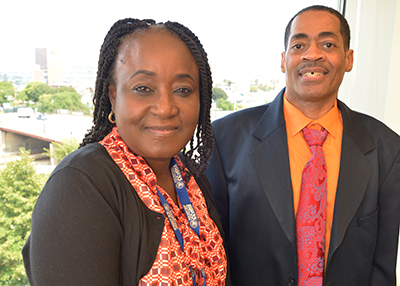 Since December 2014, Darren and Bukola have been working together to make sure Darren stays healthy. Bukola is warm and conveys both practicality and patience, which have been well-honed in her 21 years of experience as a case manager. She and Darren joke about how difficult he was in the beginning of their professional relationship. Every day was a challenge, he states: “The devil is always working to pull you back in.” Darren was frustrated — and self-admittedly, his style of interacting with others was aggressive. Bukola has helped him learn how to approach people, to listen, to ask questions. And when he can’t find the answers, he can rely on Bukola to help him.

With Bukola, Darren was able to move to a new HIV medication after he built up a resistance to the old medication. He takes 11 medications in the morning and three at night, and stresses how important it is that he adheres to medication schedule to stay healthy. Darren also lives in a third-floor walk-up apartment, which is incredibly burdensome, given his limited mobility and walker. Bukola is working with housing partners to find Darren a first-floor home so that he can leave his apartment more easily and be less isolated.

Most notably, Bukola is more than a case manager; she is Darren’s friend. When Darren was in the hospital after his most recent stroke, Bukola visited him and brought him his favorite treat. She recognizes how important their relationship is to Darren’s progress, and emphasizes, “when he comes in [to the CORE Center], I work my schedule around so at least I can spend some time with him.”

Roman Buenrostro, AFC Director of Special Projects, and his team make this support system possible. Together, they refer, coordinate and oversee care for over 5,000 HIV-positive people in the Chicago metropolitan area each year – including Darren. They also ensure that case managers like Bukola have the training, support and resources to help their clients flourish.

The system works, and Bukola and Darren’s story is an example of its success. “Bukola has a passion for case management and connects to her clients in a deep and meaningful way,” said Roman. “The fact that she can take her learning and professional development from one position and transfer those skills to another organization means that there is a certain level of stability and consistency in the system.” 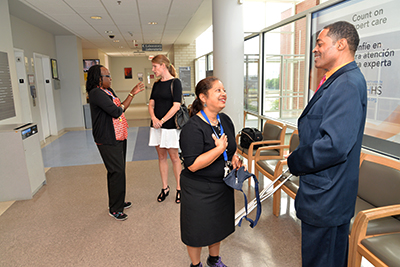 Darren’s story has a lot of heartbreak, but he is still optimistic. He explains, “Trial and error has gotten me here — but I’ve learned that I want to reach out and help people. I have to let them know I survived.” Even telling his story is cathartic, as he is open about his HIV status. As Darren moves forward, Bukola is there. She encouragingly tells him, “One thing that inspires me is that you never give up. You are still pushing on.”