A year of triathlons 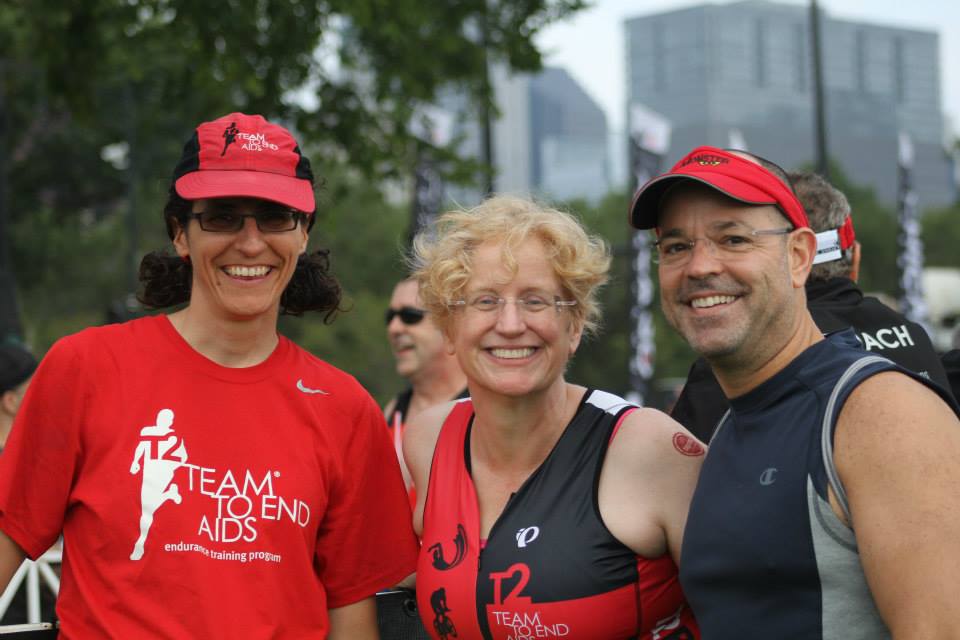 This year, for my birthday, I decided to give myself the gift of triathlon. Sounds funny, I know. I really enjoy competing against myself and with my friends and family.

I come from a swimming background. As a kid, I swam and competed in events with my sisters. One of my sisters, Laurie, was recruited to Kenyon College on a swimming scholarship. Another sister, Amy, is a coach of the Evanston Masters team. Sister Kersti continues to swim and encourages her lovely daughters to swim and they often rank high enough to compete in regionals and state championships.

My mother was the first woman referee with Illinois Swimming and when she passed away, TOPS (The Oak Park Swimmers team) put together a memorial swim meet in her honor, the Claire Statton Memorial Invitational. That meet is so popular that it can no longer be held at Oak Park High School and it’s now held at the University of Illinois at Chicago each January. Teams raise money to compete in the meet and the funds help pay swim fees for their own team members who need assistance. In 2009, my nieces swam for the first time in their grandmother’s swim meet and the local paper, the Oak Leaves, wrote an article on them and the family. It’s such a terrific legacy to have a swim meet named after my mother. My sisters and often consider ourselves “Illinois swimming royalty” because of it!

About five years ago, in January 2010, I accepted a challenge to join a group that would train for 12 weeks and complete an indoor triathlon at the end of the training. I felt it would help me to get active again, and as long as swimming was involved, I could do it! I went to almost every single training session. The amazing coaches (Scott Hutmacher and Chris Navin) helped adjust the workouts to my ability – basically I can’t run because my knees can’t take the pounding. The training was HARD.

On race day, my nieces made me a big banner and came to cheer me on. I was mostly pleased that I finished the race. Later when I got my results, they told me I placed first in my age group! The coaches told me that they thought I could compete in an outdoor triathlon and they would make sure I could cross the finish line. So I registered for the Chicago Triathlon in August 2010 and signed up to train with the Team to End AIDS so that I could raise money to help people living with HIV.

Let me say again that training was hard. What really helped were all the amazing people who trained with me. All ages, all levels of fitness. In May of 2010, my doctor told me that I needed abdominal surgery and worked with me to make it as least invasive as possible, so that I could continue to train and race in the triathlon at the end of August. That same month, I also lost a very dear friend to HIV. I decided at that moment to dedicate my race to that friend, Ann Dunmore.

Somehow, I wasn’t sure I’d cross the finish line until I actually did! Much to my surprise, a reporter approached me moments after crossing the finish line and a small blurb ended up in the newspaper about my first triathlon and the fact that I was raising money for women and children with HIV.

Each year since then, I’ve competed. I’ve also had more than my share of injuries (mostly minor knee surgeries) and, in spite of those setbacks, I’ve competed in at least two triathlons every year. This year, 2014, I was determined to be injury-free, surgery-free and compete in FIVE triathlons as a way of celebrating my 50th birthday!

Despite my best determination, I still ended up with a small knee surgery in late May 2014. However, I completed the first of my five triathlons, just NINE days later. My orthopedist (basically my primary care doctor at this point) met with me and, knowing my goals, supported me in my racing, advising me to walk the “run” portion of the triathlon. One of my oldest friends from high school, Brett, and her husband Jeff, flew back to Chicago to surprise me at the race with a banner and cheered me on to the finish line! That first race was over my birthday weekend. The first of five triathlons to commemorate my 50th was in the bag!

Every race completed in 2014 had some sort of personal record and triumph I can count. It helps encourage me to work on my form, recover better, hydrate better and race smarter. It may be at least 20 years before I come out tops in my age group again; however, I’m not giving up!

Other people’s stories, like the incredible life of my friend Ann Dunmore who died at the beginning of my journey, or the valiant Joy Morris-Hightower who lost her battle with cancer this month, keep me focused on raising funds for HIV, and on the particular struggle of women in this fight. To me, it all comes down to compassion for the cause. I’ve often said that I’m putting my body on the line, I’m out there in the lake swimming, riding [and falling off of] my bike, and doing my best to walk as FAST as I can to help raise awareness, understanding, compassion and funding for programs serving women and children facing HIV.

I’m incredibly humbled by the generosity of my friends and family over the years that have helped me raise more than $20,000 to support PACPI programs.

This holiday season, we welcome any additional gift. Unfortunately, many PACPI clients face loneliness and isolation in their diagnosis. They struggle to put food on the table, coats and boots on their children, and to keep working for a better future. PACPI works hard to get donations into the hands of our families in the moment of need. Thank you so much for your help, your compassion and your support.