Activism Alive and Well at AIDS 2012 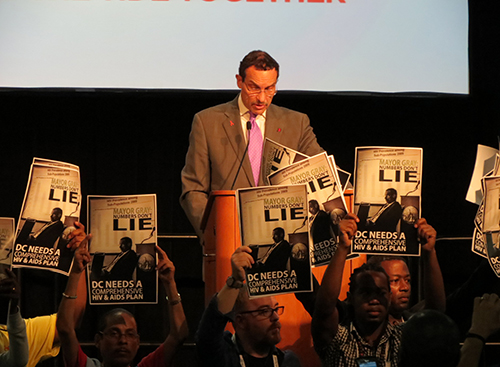 When he took to the stage for the opening ceremony of the Global Village – a free networking area that’s integral to the activist spirit of the conference -- a group of 20 or so protestors marched in front with signs demanding a comprehensive AIDS plan for the nation’s Capital.

Several times, he tried to begin with different approaches: getting chummy with his antagonists by saying that he too was once an activist, growing stern with them, reasoning with them and, finally, bargaining for a later conversation. Nothing seemed to work for Mayor Gray.

Eventually, they let him give his welcome spiel, at the behest of some of the other audience members, before sending him off the stage with a chant “Numbers don’t lie, politicians do!" It was striking scene of activism at the International AIDS Conference, where progressive activists of varied causes are rubbing shoulders with diplomats, journalists, scientists and, yes, politicians. The safe bet is there will be plenty more where that came from in the week ahead.

Just minutes prior, a group of HIV Prevention Justice Allies advocates dressed as Robin Hood chanted their own protests and unfurled a giant banner from the balcony over the press room to bring more visibility to the “Robin Hood tax,” also known as a Financial Transaction Tax for speculative trades. The tax is seen as an essential strategy to close funding gaps in health care and provide crucial resources in the fight against HIV/AIDS.

And of course, tomorrow will be the largest activism event of the week -- the We Can End AIDS mobilization, a march of thousands through the streets of Washington that will end at the White House. Click here for more information on how you can get involved.

As Secretary of State Hillary Clinton said earlier in the day when faced with another group of protestors: “What would the AIDS conference be without a little protesting?”