Activists "Act Up, Fight Back"; 12 Arrested 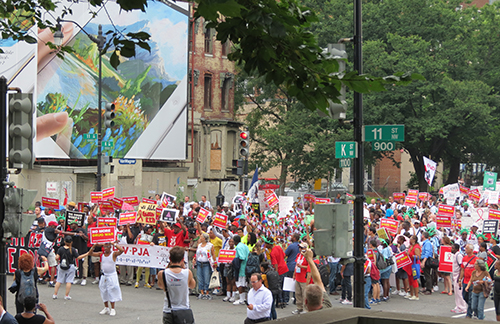 The Human Rights/Harm Reduction branch of the mobilization waits before moving toward the White House. AFC Photos-Gregory Trotter

The last time Laura Thomas was arrested in front of the White House, on Dec. 1, 1989, she was 23 years old. She lied down in the cold street with other ACT UP activists, just trying to be seen.

In total, she’s been arrested for civil disobedience 13 times – but not since 1992. As she ate breakfast this morning, she geared up mentally for another trip to the clink.

“It’s always a little scary, but it’s worth it,” said Thomas, 45, deputy state director for the Drug Policy Alliance in San Francisco and a steering committee member for the HIV Prevention Justice Alliance. “We’re not scrambling for attention anymore, but we are still demanding more action.”

Such was the context as thousands took to the streets today for the We Can End AIDS mobilization, the keynote activism event for the International AIDS Conference, a march of thousands through the streets ending in a rally in front of the White House. The four-hour protest culminated in an act of civil disobedience resulting in 12 people, including Thomas, being hauled off in police vans. 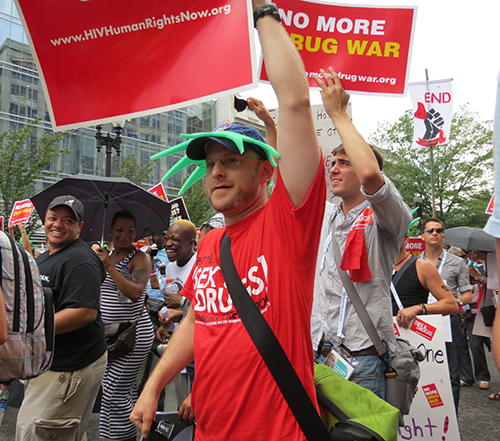 In the foreground, John Peller, vice president of policy for the AIDS Foundation of Chicago (AFC), and behind him, Michael Rivers, AFC's research coordinator, march on Tuesday.

All ages, all races and gender identities, from all continents, the throngs of people took the muggy streets at close to noon. Undeterred by the late July drizzle, they moved slowly through the streets, chanting slogans for justice for the poor and marginalized. For many, the connection to the cause was deeply personal.

“It was wake-up call because I was directly affected,” Kanini said. “Doing this march, we can show other people we care about this and that we need more people to join us.”

Or consider Rich Sutton, 48, of St. Louis, Mo., who has been HIV-positive for 29 years. Only recently did he come out of the “HIV closet” because he feared the stigma would affect his 18-year-old son. The march, the conference itself, was about engaging with the activist community for Sutton.

“The system is broken in so many ways,” said Sutton, who runs a homeless mission in St. Louis. “HIV is not a crime.”

The march’s goal was to send the message that ending the HIV/AIDS epidemic would depend, in part, on the government’s commitment to ending social and economic injustices – such as decriminalizing drug use and sex work. It was also an opportunity to bring together many disparate threads of activism into one event.

The mobilization had five branches, each representing different advocacy objectives:ending pharmaceutical greed; demand a Robin Hood Tax on Wall Street; stopping the war on women; demanding sound policies and funding; and protecting human rights and supporting harm reduction. The branches wended through alternate routes before convening at the White House. 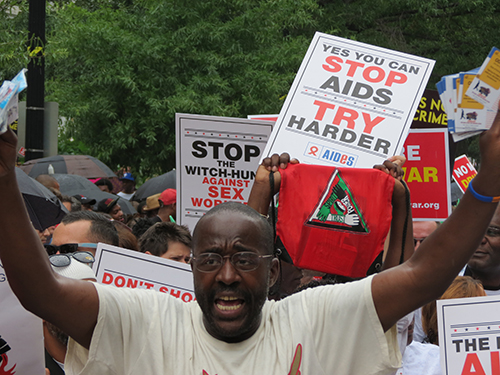 A protestor chants during the We Can End AIDS mobilization.

“Our rights are not being looked at,” said Japhet Leito, 39, from the Bronx, New York. “We go to bed hungry; we do what we have to do to survive. And we are the ones who need the most help.”

Leito has been HIV-positive for 15 years and said he was most concerned with the criminalization of drug use and sex work, as well as the lack of safe housing for homeless people with HIV.

The crowd eventually made it to Lafayette Park across from the White House. The protestors fanned out and listened to speakers rallying them to the cause.

Aditya Bondyopadhyay, a 40-year-old Indian attorney, looked on. He had been involved in the 2009 legalization of homosexuality in India, the culmination of a 10-year political fight. But he doesn’t intend to stop there. He’s now trying to convince the government it needs to supply lube with condoms – or risk higher rates of HIV transmission.

“I’m an eternal optimist,” he said. “But we still have work to do.”

After the rally, the crowd procession marched to the White House gates. In an orchestrated act of civil disobedience, about a dozen activists tied red ribbons and symbolic pill bottles filled with dollar bills to the fence as D.C. police and federal agents watched warily. 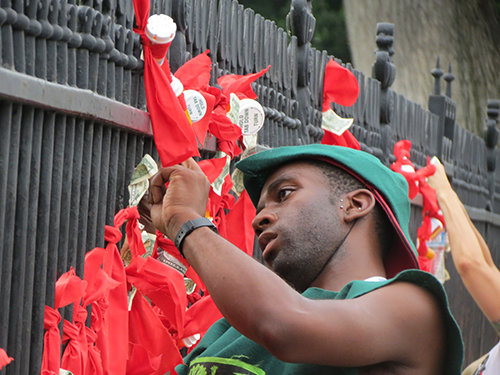 Dressed as Robin Hood to spotlight his demand for the Robin Hood tax, an activist ties red ribbon to the White House gate.

Police on horses and a few S.W.A.T. members pushed the crowd back and formed a fenced off area around those who agreed to be arrested for the cause.

Among them was Laura Thomas, some 23 years after she had first lied down in the streets. 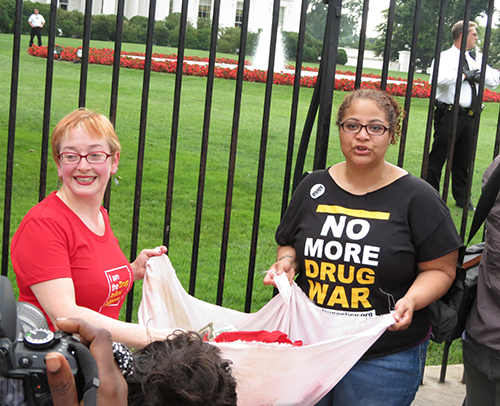 Just prior to her arrest, Laura Thomas, on the left, stands with ribbons and symbolic pill bottles to tie to the White House gate.

Her hands were soon bound behind her back. The crowd engaged in a rowdy and familiar chant.

“When people with AIDS are under attack, what do we do? Act up, fight back!”

Thomas smiled as officers helped her into the police van.