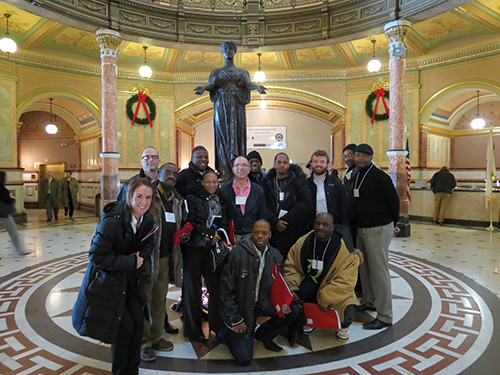 HIV advocates pose in the State House rotunda before seeking out their legislators.

In the midst of the Illinois’ notoriously unpredictable "Lame Duck Session," 15 HIV/AIDS advocates and myself headed down to Springfield on Monday to advocate the passage of ‘Medicaid Financing for the Uninsured’ – a bill that would help provide health care to thousands of uninsured people living with HIV/AIDS in Illinois under the Affordable Care Act.

It felt an honor to be in Springfield defending such a historic piece of legislation. The Affordable Care Act (ACA), President Obama’s revolutionary health care reform, holds so much promise for the fight against HIV/AIDS in Illinois.

The advocate group, brought together by AIDS Foundation of Chicago, was made up of lively members from the Illinois HIV/AIDS community. With so much on the table, there was an undeniable buzz among all the advocates as we discussed the bill during a group training before heading to the Capitol.

The Medicaid bill authorizes Illinois to take advantage of the ACA to provide Medicaid to about 342,000 low-income Illinois citizens who are currently uninsured. The bill would eliminate a major gap in health care coverage in Illinois, and because of the ACA, Illinois can offer Medicaid to this population at no expense to the state for the first three years. (In later years, the state will never pay more than 10 percent of the cost of this coverage, as federal funds will cover the remaining 90 percent.) 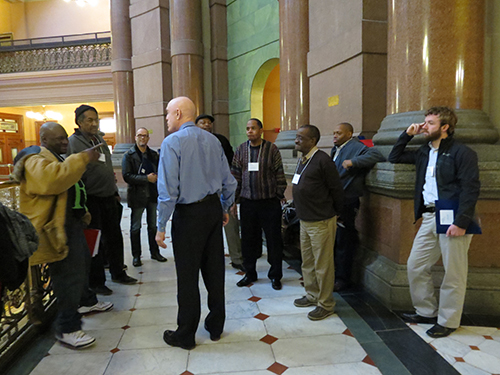 Advocates talk to Rep. Greg Harris, D-Chicago, outside of the legislative chambers.

Upon completing the training, we headed over to the Capitol. Our mission was to use our personal stories and knowledge to urge legislators to pass this life-saving bill. We wanted to put a person behind the policy.

Once inside the building, we were told the Medicaid bill had passed through the Appropriations Committee and was advancing to the House.

With bated breath, we waited outside the House chamber to catch our representatives as they came in for session. Advocate Arick Buckles managed to get the attention of his legislator, Rep. Barbara Flynn Currie, among the sea of other lobbyists and advocate groups.

“I let my legislator know what impact this would have on our community,” Buckles said.

We continued our advocacy efforts by delivering signed petitions AFC had previously collected to legislators, and distributing ‘Thank You’ cards to legislators that had agreed to sponsor the bill. Our group was also lucky enough to personally meet with the bill’s House sponsor, Rep. Sara Feigenholtz, and supportive Rep. Greg Harris. We applauded their support for the bill, our communities and Illinois. We left the Capitol feeling accomplished and empowered.

“For a small group, we were mighty," said longtime advocate Will Wilson. "I’ve been to a lot of lobby events, but this group was truly dedicated.”

Unfortunately, we learned later that the waning hours of the current term of the General Assembly did not provide enough time to advance the bill any further.

Nevertheless, our fight will continue, and we helped lay the foundation of change the ACA will bring as we enter the 98th General Assembly. We're hopeful that new Medicaid bills will be called in committee in the first week of February, when the General Assembly returns.

We may have lost this battle, but we have not lost the war!

AFC will be continuing our advocacy efforts this Spring. To be a part of Lobby Days 2013, please email lbaglin@aidschicago.org for more information.

Lucy Baglin is the policy coordinator for the AIDS Foundation of Chicago.