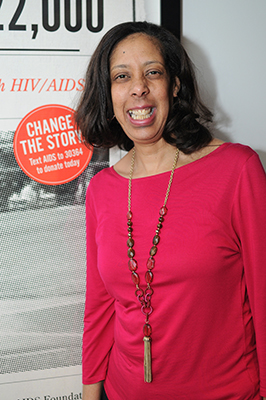 Cynthia Tucker is a woman of excellence.

For decades, she has been a relentless champion of the HIV/AIDS movement, serving currently as director of prevention and community partnerships at the AIDS Foundation of Chicago (AFC).

On April 25, she will receive an honor that’s as fitting as the virtues she embodies: The Chicago Defender will present her with the 2013 Women of Excellence Award.

Nominated by a colleague, the news humbled Cynthia. “When I read what my nominator wrote, I couldn’t believe all the things I had done,” she quipped. “I wasn’t sure if his letter to the Defender was even describing me.”

Cynthia’s 20-year career in HIV/AIDS prevention began at Planned Parenthood of Illinois. She was a counselor, sitting across from a young girl who was raped and had a diagnosis of six sexually transmitted infections (STIs).

The girl did not have HIV, but she opened Cynthia’s eyes to the possibilities of a young woman of color contracting the disease.

“It was the early 90s, and HIV was stereotyped as something only gay, white men contracted,” Cynthia said. “I told Planned Parenthood that we need to focus on HIV, but they said that it didn’t fit their mission. They were focused on teenage pregnancies, but I knew their outlook had to be broader.”

The young girl showed Cynthia what was possible and what was lacking: There were no HIV-specific programs for communities of color. It was just a matter of time before Planned Parenthood would be entrenched in the fight against HIV/AIDS.

Shortly after she met the girl with six STIs, Cynthia was counseling her first client with HIV.

“The girl was really calm,” Cynthia recalled. “She asked a lot of questions, and I read a lot to try and provide some support.”

This encouraged Cynthia to research the disease, which opened the door to discovering HIV service providers in Chicago—and she knew Planned Parenthood needed to be among them.

Cynthia presented to her organization’s board of directors, stating that HIV was a sexually transmitted infection, and if Planned Parenthood was going to focus on STIs, it needed to be comprehensive in its approach.

The board agreed, implementing a new strategy, but Cynthia was soon recruited to serve as the director of prevention at Chicago Woman’s AIDS Project. She had found her niche and was ready to roll her sleeves up and get creative.

“I didn’t come up with the term ‘edutainment,’ but I created a program that made use of it,” Cynthia said. “Lecturing young people about HIV wasn’t enough. They’d pay attention for certain parts and dozed off during others. They needed something that would engage them, so I put together a group of poets, actors, actresses, and musicians who were budding in their careers. They traveled to schools to inform people about HIV, as well as STIs and teenage pregnancy. It was a way for the audience to interact with the message.”

Her efforts proved successful, and AFC began to notice this rising prospect in the field.

AFC invited Cynthia to participate in its Service Providers Council (SPC), a coalition of organizations that provide HIV/AIDS services and programs in metropolitan Chicago.

At that time, SPC was divided among commissions, with Cynthia serving as chair of the Prevention Education Committee, which afforded her a seat on the Executive Committee—an experience she found humbling and intimidating.

“I was surrounded by CEOs and presidents of major organizations, and there I was,” Cynthia recalled. “It was an honor.”

SPC, which continues to thrive, provided Cynthia with an opportunity to learn more about the HIV service field and to see how AFC connected providers with people who needed care.

Cynthia would be a perfect fit for the organization.

Mark Ishaug, AFC’s former president and CEO, said that he would eventually recruit Cynthia to his staff—and he did in 2005. However, it wasn’t in a capacity she was used to.

Cynthia teamed up with AFC as director of grant making, a bit of a diversion from what she had been doing for the past 15 years. Despite the challenges she would face in her new role, she added a caveat to her contract: “I said to Mark, ‘I’ll be your new grant making director if you let me develop prevention programs.’ He just looked at me and said, ‘If you can create new programs, do it.’ ”

Currently, Cynthia is growing two successful initiatives with AFC that are having a profound effect on the community.

The first is a collaboration among AFC, the Illinois Department of Human Services, and Gilead Sciences, Inc., that offers HIV testing in Family Community Resource Centers on the South Side of Chicago. This initiative provides the convenience of a one-stop shop, making HIV tests readily available as people wait for public assistance benefits.

To date, the initiative has tested more than 8,000 individuals for HIV, and nearly 50 have been identified as HIV-positive. Through this collaboration and Cynthia’s tireless leadership, 75 percent of these people have been linked to lifesaving care.

The program has also helped decrease stigma associated with the disease by making testing a routine part of life.

Cynthia’s second program, known as the MTI Initiative, gets at the heart of the epidemic by focusing testing efforts on gay and bisexual men from all communities and ethnicities. The program reaches men through social venues and is designed to link them to care.

Since May 2012, the effort has tested about 1,500 men and identified 40 positive individuals, linking them to life-giving resources.

That’s the kind of thinking that makes Cynthia Tucker a woman of excellence. For over two decades, her innovative programs have had a major impact on individuals and communities.

She’s a pioneer, a visionary, a compassionate person—and on April 25, she’ll have an award that matches her greatest quality: excellence.