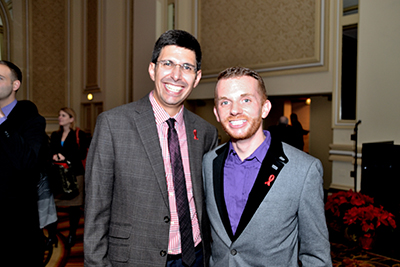 Joe Hollendoner recently announced plans to assume new duties as First Deputy Commissioner for the Chicago Department of Public Health (CDPH). His last day as Senior Vice President of Programing at the AIDS Foundation of Chicago (AFC) will be July 7.

“We’re tremendously proud of Joe and thank him for his leadership on HIV/AIDS,” said David Ernesto Munar, AFC’s President/CEO. “This is an incredible opportunity for him. And quite frankly it’s an honor that Commissioner Bechara Choucair tapped a leader at AFC for this high-profile position.”

Though Hollendoner has been with AFC for just a year and a half, his history with the organization is deep.

“The very first job I ever held, when I was 16 years old,” Hollendoner said, “was funded by AFC.” He served then as Peer Educator at Aunt Martha’s Youth Service Center in Chicago Heights, Ill.

“Having the opportunity to work within the HIV sector changed the trajectory of my life,” Hollendoner said. “Working at Aunt Martha’s provided me with a sense of community, and made me feel like I was part of a larger health and social movement.”

He continued to serve the health needs of underserved young people throughout his undergraduate and graduate school careers, earning degrees from the University of Illinois at Chicago’s Jane Addams College of Social Work.

In 2001, Hollendoner joined the staff at Howard Brown Health Center, where he continued to champion the HIV prevention and care needs of at-risk youth. In 2004, Joe oversaw the opening of the Broadway Youth Center, Chicago’s first comprehensive program for young people, ages 12 to 24.

In the later part of his 10-year career at Howard Brown, Hollendoner was named Vice President of Programs, overseeing the organization’s entire community health portfolio, including case management and HIV prevention departments.

Similarly as Senior Vice President at AFC, Hollendoner has managed all of the organization’s programmatic needs: housing, prevention, and care.

“AFC has made a profound impact on the way I see organizational stability,” Hollendoner said. “Though I loved direct service, I have developed a sincere passion for administration. Without it, programs don’t have the infrastructure to reach vital goals.”

This skillset will serve Hollendoner well at CDPH because he’ll stand at the forefront of the city’s most ambitious public health agenda: to make Chicago the healthiest city in the U.S.

In his role as First Deputy Commissioner, Hollendoner will oversee CDPH’s day-to-day management, providing direction over operational and budgetary decisions as well as supervision over the implementation of Healthy Chicago.

With a broad background in organizing health programs for vulnerable populations, Hollendoner is a perfect fit for the job.

“Joe is a lifetime advocate for public health and community development,” said Bechara Choucair, M.D., Commissioner of CDPH. “He brings with him expertise and skills that will serve our executive team and department well in our ongoing effort to make Chicago the healthiest city in the nation.”

Hollendoner isn’t leaving AFC entirely, though. He’s a strong endurance athlete and has competed in races with TEAM TO END AIDS (T2) since 2010. To date, he has completed two triathlons and three marathons, and he’s training for his fourth 26.2 miler this summer.

“Joe is a talented, caring leader who values community input as much as results-oriented systems of care and prevention,” Munar said. “We have no doubt he will make important contributions to Chicago’s public health and welfare.”