AFC's Spring Dinner: We Laughed, We Celebrated, We Made a Difference 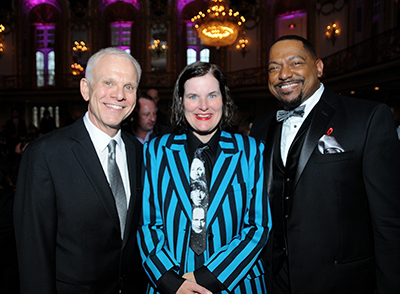 Nobody was out of reach from comedian Paula Poundstone’s sarcastic jabs at the AIDS Foundation of Chicago’s Spring Dinner, as she poked fun of Dean Richards, MC for the April 18 event; Chicago’s weather; and even the foundation’s corporate sponsors.

“I thought we were safe,” quipped Bill Gerardi, chief medical officer at Aetna Better Health, after the event concluded. He was speaking to Paula and approached her with warmth and a contagious smile. “I never expected be called out like that. I’m a huge fan of yours.”

Everybody was a great sport and enjoyed Paula’s levity, but the night carried a serious tone as well.

David Ernesto Munar, president/CEO of the AIDS Foundation of Chicago (AFC), recalled statistics of the devastating impact HIV/AIDS has had on the U.S., but he also expressed hope.

“In order to thrive [with this disease],” Munar said to a crowd of nearly 500, “a dose of tenacity helps—particularly the inner strength to reject the stigmatizing attitudes that make living with HIV an emotional rollercoaster. But mostly, people with HIV need loving and accepting family and friends, people just like you. We need to lean on a community that will never give up until the HIV crisis is over—and over for everyone.”

The Spring Dinner’s honorees have epitomized these virtues for years.

AFC presented the Civic Leadership Award to renowned choreographer Randy Duncan, who has explored themes of love and human connection in the age of AIDS through Dance for Life, an annual performance that benefits the Dancers’ Fund.

“It’s a real honor to receive this award,” Duncan said. “It really is. It’s amazing to have so many friends and supporters that wish you well and say, ‘Thank you for all your work,’ when really I haven’t worked at all. This is just what I do, and it’s a passion, and it is really lovely to be recognized.”

Also honored was Robert Neubert, a long-time member of AFC’s board and co-chair of Dance for Life, with the Lori Kaufman Volunteer Award.

After accepting the award, Neubert later noted that “it’s an incredible moment with heartfelt love and memories of so many friends that I lost in the fight, and gratefully we’re in a far, far better place, but the work’s not done.”

“I think Robert’s just a really special guy,” said Gary Metzner, senior vice president at Sotheby’s and a decades-long member of the board. “He just gives of himself and asks nothing in return—I think that’s a lot of what AFC embodies as well.”

The Spring Dinner was a much-needed event after a week of difficult news that left people emotionally exhausted.

Given AFC’s strong connection to endurance sports through TEAM TO END AIDS (T2), Richards opened the evening with a moment of silence for victims of the Boston Marathon bombing, and despite torrential downpours and an hours-long flight delay, Paula made it to Chicago unphased.

Still, there was a lot to celebrate throughout the evening, and a lot to make us laugh, but perhaps the most fitting comment came from the funny woman herself, Paula Poundstone, who set the jokes aside for a moment and reflected on the gravity of the event: “The truth is, everybody is connected to the cause. Everybody knows somebody who has been affected.”