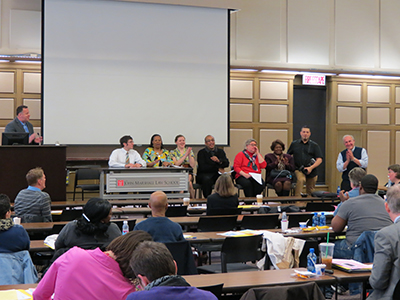 Report card day can be a source of anxiety for some, but for Chicago’s AIDS housing sector, it was a time to smile.

“Over the past five years, AIDS housing stock increased by 60 percent. That’s a phenomenal accomplishment because housing is dignity, it’s peace of mind, it’s independence, it’s family unity, it’s human rights—and it’s a future. Not only did we collectively achieve this enormous undertaking, but we did so in the worst economic decline of our lifetimes.”

AIDS housing, which provides case management and subsidized apartments to low-income, homeless people living with HIV, develops a new plan every five-year increments. From January 2008 through December 2012, this recent movement has focused on growing the number and variety of housing assistance programs.

“A lot of our initiatives provide not just housing, but supportive housing with a skilled case manager or housing advocate,” said Arturo V. Bendixen, AFC’s Vice President of Housing Partnerships. “Most people have a friend or relative that can help them in times of illness, but some people don’t. In the context of supportive housing, however, they do. This is vital for somebody living with HIV because housing is one of the key foundations for good health care.”

Despite losing 43 transitional units these past five years, there was a boom in creating state rental subsidies, long-term subsidies, and supportive housing apartments, totaling 489 newly funded units of AIDS housing.

This spike can be attributed to advocacy efforts that increased funds annually by $4.2 million. As new units become available, according to AFC, tax payers will save one million dollars every year for every 100 people housed with HIV.

Though this news is encouraging, the need for AIDS housing still greatly outweighs the number of dedicated units.

As part of the next five-year plan, AFC and its partners will use housing as a means to prevent the spread of HIV—a movement that is already in the works through the Samaritan Program.

Amanda Callow is a resident services manager with the Samaritan Program that seeks to house the city’s most vulnerable people: those with a chronic health condition, such as HIV, who have been homeless for one year or more, or who have experienced four episodes of homelessness within the past three years.

However, nobody on her 17-person case load is HIV positive.

"This approach supporting AIDS housing is important," Callow said, "because these people have a high risk of contracting HIV. Getting them off the streets and in supportive housing greatly decreases their chances of becoming positive.”

Callow also recalled an earlier time in her career, when she worked in the Center on Halsted’s Youth Program.

“This is a really difficult memory to hold, but young people used to tell me that they wished they were HIV positive. I would try to convince them that this was a serious disease, but at the same time, I understood what they were saying: There were more housing opportunities for people with HIV than for those without.”

The AIDS housing sector has also identified this need and is honing in on it, as part of its forthcoming recommendations to the jurisdictional HIV/AIDS services plan, under development by the Chicago Area HIV Integrated Services Council.

Throughout all of its goals and priorities, the emphasis is on support: Case management plays a vital role in connecting individuals with housing and keeping people stably housed.

Though Bendixen believes that individuals must take some personal responsibility for their homelessness, the community shoulders a massive blame.

While many social structures continue to fail people with HIV, the AIDS housing sector is working hard to bring this grade point average up, one report card at a time.