An Advocate and his Art 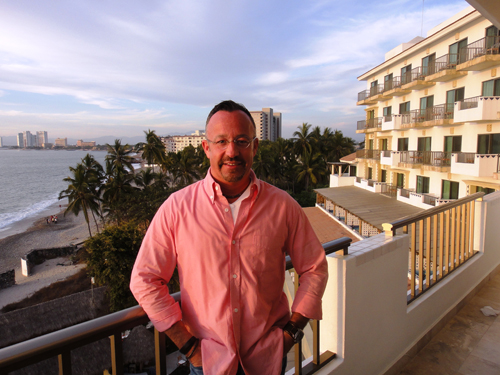 Like twin currents of the same river, Gary Metzner’s passion for art and his own emerging identity pulled him into the HIV/AIDS cause some 20 years ago.

Fresh out of college and grad school, he found work at an art gallery in the late 1980s. Metzner was gay but had not yet revealed that to the world. He found a community in the Chicago art scene that would accept him for who he was. From there, it was just a matter of time before his life was touched by AIDS.

“Just being around this new group of gay friends, who were older and shared their stories of their friends dying ... It brought the whole cause home,” said Metzner, 48, in a recent interview.

Fast-forward to present day, Metzner has been on the board of directors for the AIDS Foundation of Chicago (AFC) for more than 20 years. He has chaired and organized numerous galas and auctions, and has raised countless dollars for AFC’s work in preventing HIV/AIDS and assisting those affected by the epidemic. At the March 27 fundraising dinner — featuring playwright Tony Kushner of Angels in America fame — Metzner will be honored with the Lori Kaufman Volunteer of the Year Award.

“Joining the board 20 years ago and seeing where AFC has gone … It’s not just helping this small population of people in Chicago,” Metzner said. “It’s really changed. It’s been a great team effort. This incredible staff has moved the AIDS Foundation of Chicago to the forefront of HIV work in the country.”

Metzner grew up in the village of Glencoe, on Chicago’s North Shore. The oldest of three siblings, he recalls his childhood as “easy and well-adjusted.” He went to Indiana University to study business but an art history course changed his major and, ultimately, his life.

It’s fitting that Metzner will be receiving an award named after Lori Kaufman. After graduate studies at the University of Chicago, he went looking for work at her art gallery, the Hokin Kaufman Gallery.

“The joke is that she forgot to show up for my interview,” Metzner said, laughing. “But I was persistent and came back.”

Some 13 years Metzner’s senior, Kaufman remembers the young Metzner as being very impressive, driven and organized. The two became dear friends and have remained so ever since. Metzner eventually followed Kaufman to AFC’s board of directors after the death of her close friend, Jon Cockrell.

Cockrell, an interior design and furniture artist, died of AIDS in 1988. He was 35. His passing motivated Kaufman to commit herself to working on behalf of people living with HIV/AIDS. In time, she closed her gallery to fully dedicate herself to her work with AFC. 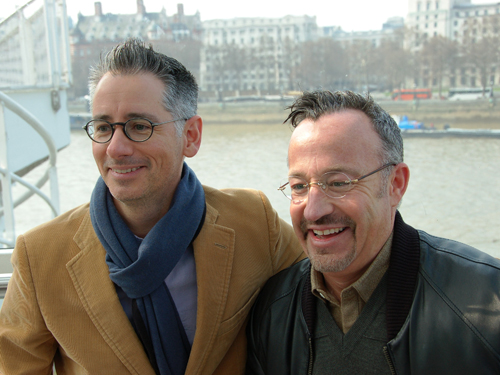 Metzner (at right) with his partner, Scott Johnson, in London in March 2011.

It also had a major impact on Metzner, who had only recently come out as gay. At the memorial service, he was impressed by the feeling of community and emboldened in his new path.

“I felt like it was a community that I would be very welcome in,” Metzner said.

Soon after, Metzner helped solicit art for AFC’s “Art Against AIDS” fundraiser and eventually joined AFC’s board of directors. And then, as fate would have it, Metzner and Kaufman saw Angels in America on Broadway in 1992.

“HIV was not as much in the forefront here as it was in New York or San Francisco,” Metzner said. “It was a little slower to understand the AIDS crisis here. Seeing Angels was really impactful. It tied everything together.”

Metzner returned to Chicago with a renewed sense of purpose in his work with AFC. Over the years, he’s been closely involved with fundraising events like “Not Just Song and Dance,” “Art Against AIDS,” tennis events in partnership with the Elton John AIDS Foundation, and “Dance For Life.”

“You’re always trying to come up with new and clever events,” Metzner said. “The area where I think I excel has been fundraising and planning events and getting people to come to wonderful dinners and lectures.”

His success has come as no surprise to Kaufman, his longtime friend and mentor.

“When Gary came to AFC, you could see — just because of who he is — that he was going to truly make a difference and raise money, awareness and consciousness,” Kaufman said. “He’s emerged as an incredible advocate for people living with HIV.”

Metzner is now senior vice president of Sotheby’s and fine art director for its Midwest offices. He lives in River North with his longtime partner, Scott Johnson.

In his capacity as an AFC board member over the years, he has seen many changes in the ongoing efforts to end the epidemic. As the economy continues to struggle, there will be challenges in fundraising, he said. But there’s been too much accomplished, and there’s too much yet to do, to stop now.

***
Tony Kushner will be the guest of honor at the AIDS Foundation of Chicago's 2012 fundraising dinner, An Angel Among Us: A Evening with Pulitzer Prize-winning Playwright Tony Kushner, on March 27. Tickets can be purchased online or by calling Rhett Lindsay, AFC’s manager of fundraiser events, at (312) 334-0935.