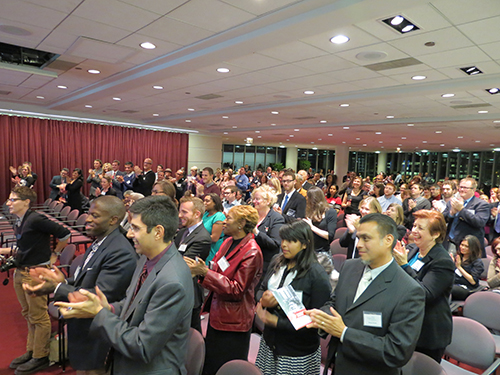 AFC staff and community partners gather for the 2012 Annual Meeting.

Immense health care changes are coming, regardless of who wins tomorrow’s election. But we will confront these new realities with hope, purpose and a plan.

Such was the collective feeling Thursday night at the AIDS Foundation of Chicago’s Annual Meeting at the University of Chicago Gleacher Center. Close to 200 people — medical professional, case managers, people living with HIV, sponsors and others involved in Chicago’s HIV sector — were on hand to reflect on some of the past year’s accomplishments and look ahead to 2013.

“AFC’s new strategic plan reaffirms — first and foremost — the urgency of our mission,” said Munar (at right). “It commits the organization to explore new paths to evolve how we fight HIV and help those directly affected in this era of rapid change.”

Called “The Road to Health: Charting Health Improvements for HIV-Affected Communities,” the strategic plan is intended to cover the next three years 2013 to 2015. The plan is organized around three broad goals: strengthening community health, leading integration of changing health systems and managing for better outcomes at each stage of HIV care.

“Our approaches and strategies will leverage AFC’s expertise to continue to pursue progress in the AIDS fight,” Munar said.

In addition to the presentation of the strategic plan, three awards were given — representing Inspiration, Impact and Innovation — to the Northalsted Business Alliance and Special Events Management, Norma Rolfsen, and Cook County Commissioner Bridget Gainer and the Cermak Health Clinic, respectively.

The Northalsted Business Alliance and Special Events Management, recipients of the Inspiration award, was acknowledged for being an invaluable partner to AFC. 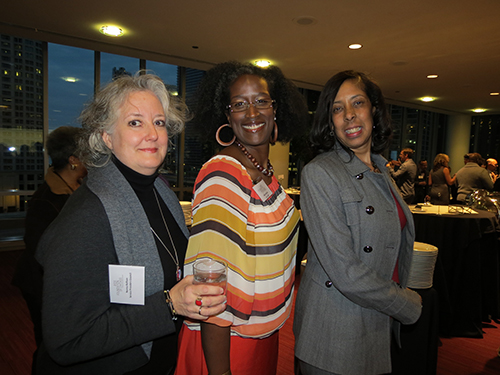 Rolfsen, recipient of the Impact award, Norma Rolfsen, is program director at the Michael Reese HIV Clinic at Mercy Hospital.

“Thanks to Norma’s hard work and her leadership with other clinicians, the state accepted the recommendations to exempt Medicaid beneficiaries with HIV from draconian medications limits and bureaucratic red tape,” Roesler said. “People with HIV on Medicaid and all of us are grateful for her leadership.”

Commissioner Gainer and the Cermak Health Clinic were honored for their efforts in the implementation of opt-out HIV testing in Cook County Jail, a major development as of this year.

“This year’s Innovation Award recognizes valiant efforts to resume routine HIV testing in Cook County jail – an important step forward for public health and social justice for people and communities in crisis,” said Rev. Charles Straight (at right), who serves on AFC’s board of directors, to applause from the crowd.

Looking back on the year’s achievements, Munar reflected on successful events — like the Annual Dinner featuring Tony Kushner, the playwright who wrote Angels in America — and bold new AFC programs, like testing initiatives launched this year targeting gay and bisexual men and those in underserved communities of color.

The Annual Meeting provided a healthy dose of inspiration and community, Munar said.

“Seeing all of you and recounting some of our collective accomplishments reminds me that we are more than a sector and stronger than just a cause,” Munar said. “Corny as it may sound, I do believe that there’s an invisible thread that connects each one of us to a mission of hope, love and acceptance.”