Mae Smith sits with her two of her daughters in her homey Glendale Heights kitchen. A coffeepot gurgles from the counter. Her youngest granddaughter plays quietly in the adjacent living room.

If you saw Mae Smith on the street, you might not immediately suspect she’s a passionate and determined HIV/AIDS advocate. She’s diminutive, soft-spoken and frail with age, with clear blue eyes behind her glasses. And there’s the fact that she’s 85 years old, placing her in a generation not often associated with the AIDS epidemic.

But looks can be deceiving. Smith will be participating in her 20th consecutive AIDS Run & Walk on Sept. 29 — and she’s not planning on stopping anytime soon. She hasn’t missed one since her son, Ron Smith, died of AIDS at age 33 in 1993. Participating in the annual event has brought the family some measure of peace and community since Ron’s death, as well as a feeling of satisfaction that they’re making a difference.

Their T-shirts and banners have changed from year to year, but their motto has not: “For Ron, we walk and love.”

“It’s so much fun. You see someone from pretty much every walk who has known Ron …To be out and see all these people out for the same cause and we know that pretty soon, maybe it will be wiped out,” Smith said. “I’m not a pessimist. I’m an optimist. Things will get better.”

Ron Smith was hairstylist in Wheaton, a charming young man who enjoyed traveling and dancing, one of Mae Smith’s eight children from two marriages. He graduated from Glenbard North High School, in Carol Stream, Ill., and then studied horticulture at the College of DuPage.

He was gay but did not come out to his family until he was in his late 20s.

“We had suspicions. It wasn’t a total shock,” said Gayle Lutz, one of Ron’s four sisters. “He was my brother, her son … It was just like, so? So what? We love you. It doesn’t matter.”

After spending a couple years in Oregon, Ron returned home to pursue a career in hair styling. It was an obvious path. For years, he had styled the hair of the women in the family.

“I haven’t had a good haircut since!” said Sue Miller, another sister of Ron’s. The three women at the kitchen table laughed and relished the memories.

“He was a wonderful person taken away from us way too soon,” Lutz said, softly.

In 1987, Ron Smith was diagnosed with HIV. He told only his sister, Diana Guido, but as the years passed, it became necessary to tell his entire family. He struggled with alcoholism, developed shingles and, eventually, contracted pneumonia.

Refusing the medications, Ron turned to his faith. He gave up drinking in his last year of life, earning the one-year sobriety medal from Alcoholics Anonymous one week before he died in 1993. Once hospitalized, he did not suffer long.

“It could be wrong or it could be miracle he was taken, but to see him in the hospital in that much pain, I prayed to God to take him away,” his mother said, her gaze unwavering.

Ron’s father, Mike, was a jovial man who loved to crack jokes, always sticking out his tongue when the camera was trained on him. But he had been quiet about his son’s diagnosis.

“The first time I saw him cry was when Ron passed away,” Mae Smith said.

Mike Smith died in 2009 at age 79. Before then, he had joined his wife every year at the AIDS Run & Walk, even after he had heart surgery a few years ago. In 2008, he participated in his wheelchair. Several family members attempted to persuade the aging matriarch to use a wheelchair, too. She complied, if briefly.

“How long did I sit in it?” Mae Smith queried her daughters.

“Not long!” Gayle and Sue replied in unison.

“You got that right. Just to make them happy,” she said, sternly, to their laughter. “It’s a walk and I’m his mother and I want to help.”

With the organizing help of her daughter-in-law, Tammy Smith, Mae Smith is hoping to bring out record numbers of family and friends this year. If they can successfully tap their family network, it shouldn’t be a problem. In addition to her six surviving children, Mae has 17 grandchildren, 32 great-grandchildren and 6 great-great-grandchildren.

“Everyone in the family has received an email, informing them that Grandma only accepts doctor’s notices,” Tammy Smith quipped from the living room.

Even if they don’t have large numbers or raise a lot of money, Mae likes the idea of bringing new awareness to people: With proper treatment, AIDS is no longer a death sentence. But it is still very much an epidemic affecting the lives of 1.2 million Americans, many of whom are not on medication.

Mae’s had her share of heartache. She lost another son, Michael, to the throes of alcoholism in 2000. As a young girl, she had dreamed of being a nurse. But her father died when she was 16 years old, ending her hopes of college and nursing.

“Then there was the war and I got married,” she said, her voice trailing off.

So this is her way of making a difference?

“That might be it,” Mae Smith said. “If we can prevent people dying, I think it’s wonderful. I don’t care if it’s in this country or whether they’re white or black or anything.”

She plans on participating in the AIDS Run & Walk for another 10 years.

“Then if I can’t walk, you can put me in the wheelchair,” she said to her daughters, who erupted in laughter. “It ain’t going to happen because I’ll still be walking.”

She turned quiet before speaking again, staring at the tabletop, seemingly lost in thought.

The room went silent with that sentiment.

For Ron, they walk and love.

Registration is now open for the 2012 AIDS Run & Walk Chicago on Sept. 29, starting at Soldier Field. Go to aidsrunwalk.org to learn more about the event, register or make a donation. 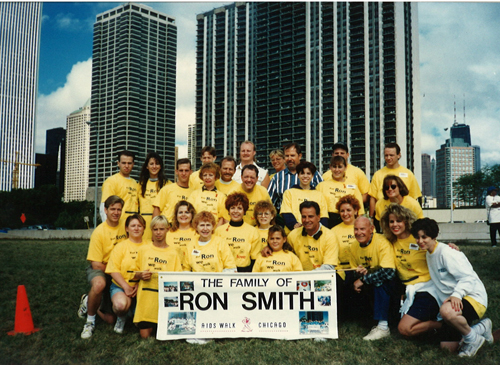 Ron Smith's family poses for a photo at a previous AIDS Run & Walk.