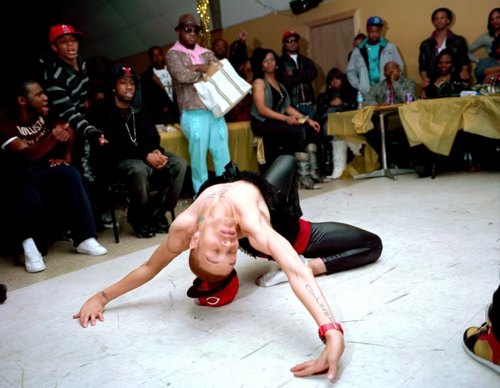 A dancer vogues at a past ball event. Photo courtesy of Todd Diederich.

This Sunday night, the Chicago House is sponsoring the 2nd Annual Memories of a Mini Ball, an event that promises to be legendary in more ways than one.

For the uninitiated, the “Ballroom community” is a historically a dynamic LBGT subculture in which people can compete for prizes and respect by “walking” or “vogueing.” The Mini Ball is also an opportunity for HIV prevention outreach. In collaboration with the Legendary Mother Solomon Infiniti, who is hosting and promoting the event, Chicago House will be distributing condoms and lubricant, and offering HIV testing.

It’s part of a growing trend of community-based organizations reaching out to the ballroom scene in an attempt to “meet people where they’re at,” said Liz Thompson, HIV coordinator for the Chicago House.

The event is from 9 p.m. to 2 a.m. at Captain Hardtimes, 436 East 79th Street. Lois Bates, a beloved transgender health worker and HIV activist who died last year, will be honored at the event along with other legendary figures in the ball community.

Thompson coordinates Chicago House’s HIV testing program, among her other varied responsibilities. She took the time to answer a few questions about the Mini Ball and the place of HIV outreach in such events.

Inside Story: What is the occasion for this event?

Liz Thompson: I was introduced to Legendary Mother Solomon Infiniti recently, who is known for organizing ball events that incorporate HIV prevention messages and services. When we began collaborating, he mentioned his idea of having a ball that also memorializes the late (and great) Lois Bates, a pioneer in HIV and transgender activism, and other legendary figures in the ball community: Sasha Valentino, Issys Escada, Tiffany Omni, and Statement Paige Infiniti-Evisu.

This upcoming Mini Ball will do just that, and continue to offer free HIV testing, condoms, and prevention education materials – which is where Chicago House comes in.

IS: For those who may not know, can you briefly describe the ball culture? What will be happening at this event?

LT: I am fairly green to this culture, myself, but have found myself explaining this to quite a few folks over the past few weeks and I get more excited about it each time. If I were to describe it in one sentence, I’d say that it is a space for individuals to express themselves freely and openly in creative ways...but it’s a bit more intricate than that.

The Ballroom scene is very dynamic! It is organized by Houses, which are a collection of individuals who tend to come from places in their lives where their gender and/or sexual identities are not supported.

These Houses provide a launching pad for transformation and a relative support system. One of the main functions of the Houses is to “walk” or compete against one another in the Ball, where they are judged on dance skills, costume, general appearance and attitude. The performances eventually give way to a more intricate and illusionary style of dance called “vogueing” - model-like poses, inspired by Vogue Magazine, integrated with angular, linear and rigid arm, leg and body movements that often symbolize ancient Egyptian hieroglyphics.

The competitor with the best dance moves and a majority of votes from the judges is declared the winner of the battle. At the upcoming Mini Ball, both runway and vogueing competitions will be happening alongside special guest performances. Competitors are also encouraged to use “safer sex props.”

IS: Why is this type of event important?

LT: There is significant stigma surrounding HIV that prevents individuals from getting tested or accessing care. If we can work to break down these barriers and de-stigmatize HIV, then we’ll see a significant impact in this epidemic. I think that promoting HIV testing and care in a “safe” space, such as a ball, can help to encourage or motivate individuals to take control of their health, especially if they have difficulty  in or are afraid of accessing these services in the communities in which they live.

IS: Is this kind of outreach new for the Chicago House?

LT: Yes. Our prevention program has worked hard to branch out and meet folks where they are, and we are very excited about the opportunity to continue to expand this effort.

Community-based organizations have slowly started to catch on to the Ballroom scene, working with House leaders like Solomon Infiniti to provide free services at their events. I think that if this continues, we need to make sure that these services are accessible and provided in a culturally sensitive way, using the community and family structures within the scene to foster trust and continued support.

IS: What’s the strategy behind testing for HIV in a setting like this?

LT: There are disproportionately high rates of HIV infection among LGBTQ youth, and these rates call for a unique approach in HIV prevention efforts, particularly those that are culturally sensitive and community-based. Solomon Infiniti can speak volumes about how non-traditional HIV prevention work occurs within the Houses of the Ballroom culture.

Historically, House mothers and fathers have provided support, guidance, and HIV education, and many times have even escorted young folks to get tested. In this case, Solomon integrates these efforts into the Ball events.

IS: Is it a tricky balance in hosting an event where you want people to feel sexy and have fun, but you also want to promote safe sex and HIV testing?

LT: It certainly is! But the Ballroom scene is the PERFECT place to strike this balance, especially during an event such as this upcoming Mini Ball that encourages the use of “safer sex props” in costumes and runway performances. It’s important to think about how one approaches events like this with prevention messages; reinforcing a message that knowledge of one’s HIV status and having safer sex can be empowering, and that being safer and healthy IS sexy!

For more information, visit the Facebook page for the 2nd Annual Memories of a Mini Ball. 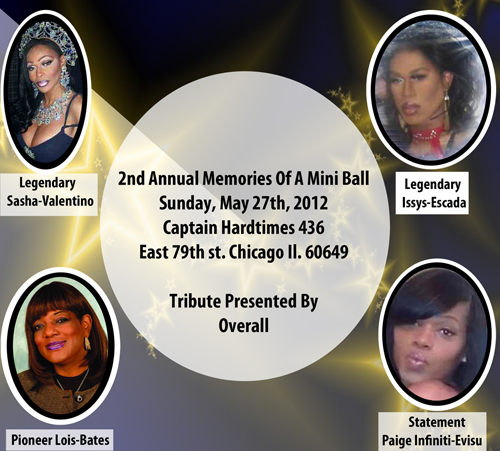