"Our Girls Matter." That’s the tagline for the AIDS Foundation of Chicago (AFC)'s Project Elevate. The marketing pieces -- developed for young cisgender (cis) and transgender (trans) women of color, by young cisgender and transgender women of color -- feature photos of young women, with inviting, smiling faces that evoke a sense of community and needed action. The social marketing campaign, combined with other promotional materials, are sprinkled throughout AFC's office and partner sites to encourage young Black and Latinx women to get tested for STIs and take control of their sexual health. 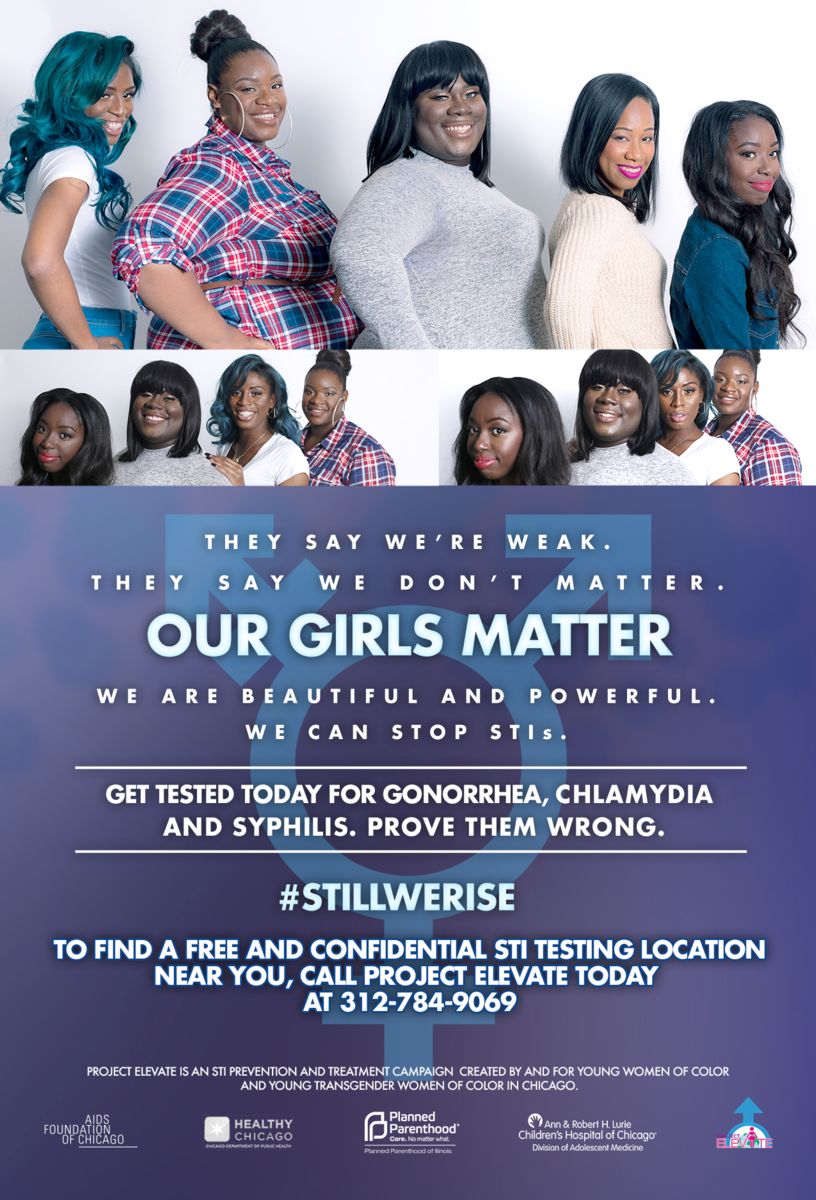 Project Elevate is a three-year project funded though the CDC Community Approaches to Reducing Sexually Transmitted Diseases (CARS) initiative, and the women pictured are part of the project's Youth Expert Advisory Board (YEAB). The board meets once a month and strategizes ways to mobilize more cisgender and transgender women of color to get tested for STIs, while also increasing awareness around common structural issues perpetuating STI disparities in the community.

But the work doesn’t stop at awareness-raising: Another key component of Project Elevate is the four-site STI and HIV testing network located at Lurie Children's Hospital's Center for Gender, Sexuality and HIV Prevention in Uptown and at Planned Parenthood’s Englewood, Austin and Roseland locations. As YEAB members focus on spreading awareness through outreach, events, attending conferences and community-building, these four testing sites serve as home bases for young cis and trans women of color seeking access to safe, culturally sensitive and culturally appropriate services.

Sheila Mahon is a big contributor to the work being done to create these safer and culturally sensitive services; she’s a Behavioral Research Associate at Lurie Children’s Center for Gender, Sexuality and HIV Prevention. Mahon runs the site's Project Elevate testing, which involves speaking one-on-one with young participants in order to help them better understand sexual health, while also learning more about their experiences at the testing sites.

“I’ve seen [participants] from all over the city,” says Mahon. “A lot of the participants have told me, ‘Oh, I’ve been around the city and there aren’t many places to come in.’ … A lot of young women, they felt really comfortable [at Lurie] because it’s a safe space for them.”

The Lurie testing site is not a typical clinic. They have candy dishes full of condoms, free snacks and other donated materials for participants to enjoy. This setup helps make the environment a lot more inviting and welcoming for participants, while also addressing some of the other obstacles that participants might face.

Based on conversations with her participants, Mahon notices that there is a lack of sexual health information for women, likely related to inadequate sex education in schools and an absence of spaces for young people to discuss sexual health in a comfortable environment. She says, "[A] few of my participants had no idea what PrEP was, or  any idea of how gonorrhea and chlamydia were transmitted. To talk to them about the raw details, instead of it being sugar-coated, is really important."

Inadequate sex education in schools is a major problem across the U.S. and one of many structural issues that Project Elevate has identified  that perpetuates STI disparities among young women of color. According to the U.S. Centers for Disease Control and Prevention (CDC), young women aged 15-24 experience disproportionately high rates of STIs and HIV throughout the country, with Black and Latinx women seeing disproportionately higher rates than white women. In Chicago, youth aged 20-29 made up 51.5% of all gonorrhea cases in 2015, and combined with youth aged 13-19, they represented 76.2% of all newly diagnosed cases of gonorrhea that year in Chicago. Furthermore, non-Hispanic Black populations were the most frequently diagnosed with new cases of HIV (54.1%), chlamydia (47.9%) and other STIs in Chicago, while Hispanic populations were also experiencing disproportionate rates of STIs. These numbers are already troublesome, but even yet, they still neglect to properly reflect the number of young, trans-identified women who are also disproportionately affected by high HIV and STI rates.

"A lot of the participants have told me, 'Oh, I've been around the city and there aren't many places to come in.'... A lot of young women, they felt really comfortable because it's a safe space for them."

Project Elevate has set out to reduce STI numbers and eliminate barriers to health care through their work. From October 2015 to June 2017, Project Elevate's partner testing sites have administered 539 STI and HIV tests for young cis and trans women of color between the ages of 13 – 24 across Chicago. To get to the heart of systemic barriers that stand in the way of young women of color and health equity, L’Oreal Bailey, Project Manager of Special Projects at AFC, built a questionnaire and studies the resulting data to help identify those barriers within communities. The questionnaire asks about basic demographic information, such as age, ethnicity and race, while also asking questions regarding the participants’ living situations, whether or not they have heard of PrEP, and much more. The questionnaire is used to assess the work being done at testing sites, in case adjustments are needed to make them more accessible to the communities that Project Elevate prioritizes. For instance, Bailey notes that “At Planned Parenthood, we still have not seen any trans women of being tested, so that's one of our challenges that we're trying to kink out.”

Bailey also works closely with YEAB members and notes how the testing program acts a useful tool  for the members to continue their outreach and community building efforts. Her hope for the project is to be able to expand and connect with more young people and do more to support the YEAB members themselves.

“They’re more than testing,” says Bailey. “We’ve all developed relationships with [YEAB members], but it’d be great to give them something in return … I want them to get more professional development skills as well as be able to give job placements for those members that need it.”

Project Elevate is an extremely unique and progressive initiative that strives to make sexual health accessible, safe and comprehensive for all young women of color. Although 2017 is the last year of the CARS grant for Project Elevate, there is still a lot of work to be done in order to combat the STI and HIV disparities in communities of color. Fortunately, Project Elevate has set the groundwork to continue mobilizing, engaging and centering the voices and experiences of young cis and trans women of color.