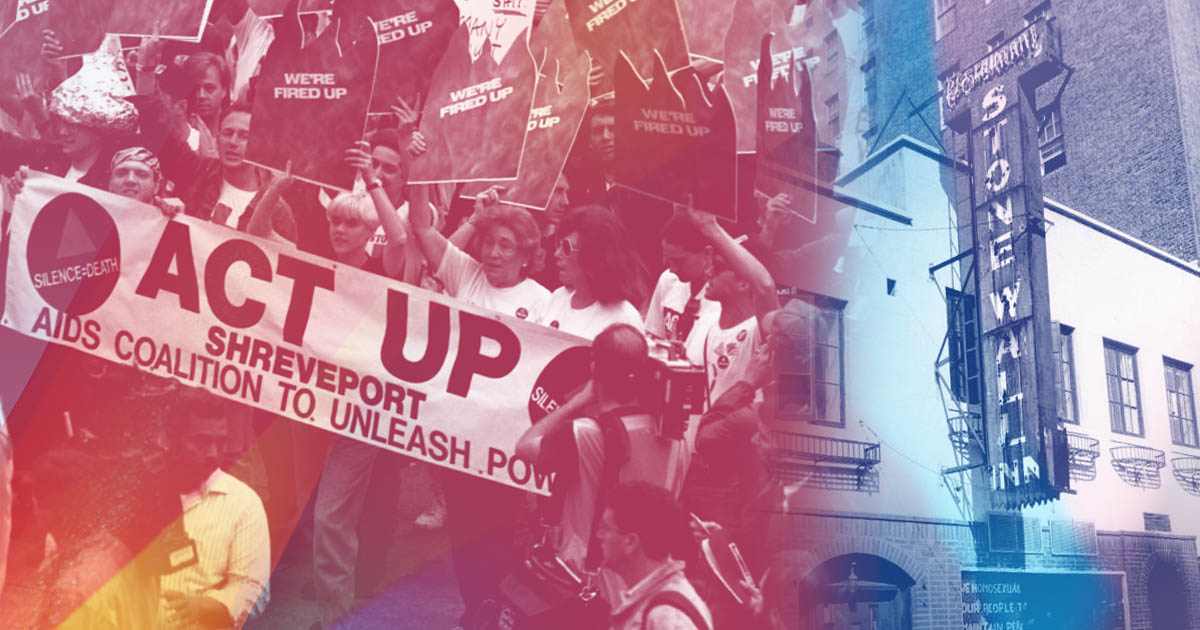 Some say it started with a brick — a brick hurled at New York City Police Department officers by a trans woman of color (perhaps Marsha P. Johnson, perhaps someone else). The brick (or high heel or shot glass or heavy bag or other projectile — reports vary) was a response to a violent, Saturday-night raid of the Stonewall Inn, a popular gay space in New York City in June 1969. That brick crashed not just through a wall of glass, or a wall of police officers, but through a wall that previous LGBTQ pioneers had worked very hard to overcome.

The Stonewall riots between police and an intersectional collective of queer Black and Latinx folks, transgender and gender-nonconforming people, and other members of the LGBTQ spectrum lasted on and off for days. The result: many arrests, hospitalizations and irreparable damage to the Stonewall Inn itself.

But in the days and weeks after Stonewall, the underground movements for gay liberation that had been simmering suddenly boiled over, taking greater action and growing their numbers. The work of the Mattachine Society, which had been advocating for LGBTQ inclusion for at least two decades before Stonewall, now had a radically visible counterpart in the fight. In the 50 years since that violent and unifying night in the East Village outside of Stonewall, the LGBTQ movement in New York City and beyond has made giant strides in securing equity for this community. The bombastic tactics used at Stonewall and subsequent protests, actions and rallies became the right recipe for success in advancing LGBTQ rights.

Twenty years later, a new and terrible struggle came to light that affected mostly gay and bisexual men: AIDS. During the AIDS crisis of the 80s and 90s, a governmental and societal silence and shunning prevented immediate systemic action to research treatment for HIV and provide real, comprehensive support for the people who were dying from the virus. But on March 24, 1987, the HIV/AIDS movement had its own Stonewall: the AIDS Coalition to Unleash Power (ACT UP) stormed Wall Street and demanded that the U.S. federal government take the AIDS epidemic seriously and advance research and treatment for the virus (see clips from this protest and subsequent actions of ACT UP here). Like Stonewall, the protest relied on a tenacious, militant energy, which successfully turned the attention of the nation to a vital movement.

Stonewall’s legacy pumps through the veins of the work of ACT UP and other movements that built a path toward acceptance, support and liberation for people living with HIV and AIDS. “Stonewall gave LGBTQ people a sense of the tremendous power they have as a collective and how focused anger can be used as a tool for change,” reflected Kim Hunt, executive director of Chicago-based Pride Action Tank (a project of the AIDS Foundation of Chicago). “Stonewall let people know that institutions could be toppled, at least for a moment. The act of physical rebellion, camp, performance as activism, speaking truth to power were all incorporated in the direct-action strategies of ACT UP.”

“Because the LGBTQ movement was stronger after Stonewall, that really helped fuel a strong response to the HIV/AIDS crisis,” observed Tracy Baim, a longtime Chicago journalist and founder of Windy City Times, the city’s primary beacon of information for the LGBTQ community. Baim was an active documenter and participant in the HIV/AIDS movement of the 80s and 90s and now is publisher of the Chicago Reader. “Stonewall was an important predecessor and created a larger pool of activists, and a greater general understanding of LGBTQ people when it came time to respond to the crisis of HIV/AIDS. It provided foot soldiers in activism, and caregivers in the hospitals. We had a larger and stronger movement in place to be able to respond to this horror within, and to fight the ignorance and neglect from the outside.”

Director of Building Healthy Online Communities Dan Wohlfeiler was also at the front lines of the response to the AIDS crisis in the 90s. He ran programs at the STOP AIDS Project in San Francisco from 1990 to 1998 (the project merged with the San Francisco AIDS Foundation in 2011). Looking back, he notes that Stonewall ushered in a new approach to resistance: bold radicalism, rather than the more restrained approach of groups like the Mattachine Society. “The Stonewall riots really marked the beginning of a new era of open confrontation and radicalism in the fight for gay rights. In the eighties and nineties, we continued to see both kinds of organizing to fight HIV: Some in the HIV movement took a much more individual-focused, more client-based approach, and some mobilized and took on quite radical approaches to address some of the larger forces — a non-responsive government, poverty, racism, homophobia — that drive the epidemic.”

Stonewall contributed vital lessons learned to an American playbook for effectively protesting for human rights, which movements for equity, visibility and inclusion continue to contribute to today. It also created an emotional model for coming out publicly with very personal, very stigmatized news. Author and activist John-Manuel Andriote noted, “The first gay men to go public about having AIDS acted from a place of gay pride and power that came after Stonewall . . . They likened ‘coming out’ about having HIV/AIDS to their experience of coming out as gay."

Stonewall was one of many movements that inspired an effective response to HIV and AIDS in those early days; in addition to the civil rights movement for Black liberation, Tracy observed, “the women’s health movement of the 1970s also helped lead to a strong response on both a caregiver and a political level. Women were fighting back for control of their bodies, and women in the LGBTQ movement of the 1980s used that experience to help respond to HIV/AIDS. Men learned from their sisters, and all new activists learned from their predecessors to ‘fight back’ and ‘silence = death.’”

Reflecting on 50 years of advancement in LGBTQ rights since Stonewall, and almost 40 years of advancement in supporting people living with HIV and AIDS since the height of the epidemic, a multi-pronged approach to resistance and liberation can achieve the best outcome. Unfortunately, this is still an aspiration, not the rule. Kim observed, “When I think of Stonewall, I also think of the messiness that the LGBTQ community, writ large, still struggles with. With all those trans and nonbinary folks and street youth [who led the Stonewall riots], many of whom were people of color, prominently displayed in popular photos of the Stonewall riot, I think about how the most marginalized and targeted in our communities often have to push the more privileged within LGBTQ communities to act more visibly, show their anger and imagine bigger.”

Categorized under Advocacy, Inside Story, National and Tribute.