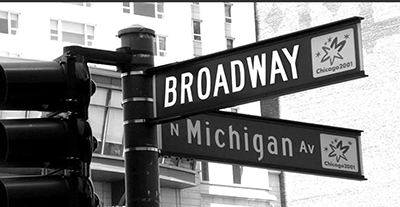 Chicago’s famous Drake Hotel will move to the intersection of Broadway and Michigan on Sunday, July 14.

I know what you’re thinking: “Broadway and Michigan don’t intersect!” But believe me, they will by the middle of July.

Christian Carter, a stage actor known for his role in South Pacific, organized an event called Broadway Meets Michigan Avenue, which brings together two of his favorite things: brunch and musicals.

“I absolutely love brunch,” Carter said, “but when you’re preparing for a Sunday matinée, you hear all these great stories about your friends at brunch, but you always have to miss them.”

Though he lives in New York now, Carter called Chicago home between 2001 and 2005. Recently, he was back in the Windy City, enjoying the Drake Hotel when he noticed the potential of its event space.

“You can’t beat the Drake,” he said. “I approached management there and said that I would like to put together a performance of songs, many of which will be from the Book of Mormon, since my business partner [Nick Laughin] is in the cast.”

The brunch will also feature performances by Christopher Shyer, Darius Harper, and Bradley D. Gale, all actors from television, film, and Broadway—specifically the Book of Mormon.

Carter envisions a large, sold-out event at the historic hotel, one that will return annually, connecting Broadway with a charity.

Carter has long identified with the HIV/AIDS movement because his uncle died in 1987 from complications with the disease. Ever since, Carter and his family have looked for ways to support people living with HIV.

“I didn’t decide on a charity to benefit until I pitched this idea to my friend, Wilson Cruz,” an actor and senior staff member at GLAAD (Gay and Lesbian Alliance Against Defamation), Carter said. “He spoke so highly of the AIDS Foundation of Chicago that I had to get connected with somebody there.”

“I was thrilled with [Carter’s] idea when he introduced me to it,” said Rickie Ryan, Deputy Director of External Relations at the AIDS Foundation of Chicago (AFC). “It’s always humbling when people want to support AFC, but this seemed like a unique opportunity. Not only could our supporters enjoy Broadway music in the beautiful Drake Hotel, but we can connect new people to our life-giving work.”

Broadway Meets Michigan Avenue will start at 11 o’clock in the morning and last until one in the afternoon. Tickets are available online at broadwaymeetsmichiganavenue.eventbrite.com for $110 per person. Each ticket includes a brunch buffet and two cocktails.

“I expect great things,” Carter said. “I’ve never put on an event like this before, but without a doubt, it’s going to be special.”