Doctor: "Abstinence is not enough." 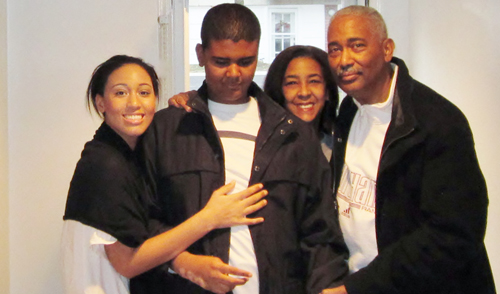 To many, the debate over comprehensive v. abstinence-only sex education is one of cultural values and political leanings.

But it’s much more for Dr. Lisa Henry-Reid. She has dedicated her professional life to adolescent medicine. She’s attended the funerals of patients who have died of AIDS. Every day, as a clinician, she sees living examples of why Illinois teens need more factual information to make healthier life decisions. She's also the mother of two teen children.

“Our society, our conservative society, feels very strongly about abstinence,” said Henry-Reid, chair of the Division of Adolescent Medicine and Young Adult Medicine. “Abstinence may be ideal, but it’s not the reality.”

She went on to point out some grim statistics: In Chicago, 15 to 19 year old females have the highest rates of chlamydia and gonorrhea in the country. There are approximately 19 million new STIs annually and almost 70 percent are in youth ages 15 to 24 years.

It doesn’t have to be that way. The AIDS Foundation of Chicago (AFC) proudly supports HB 3027, a bill that would ensure that sex education in schools is medically-accurate and age-appropriate. In short, it would guarantee comprehensive sex education for all students, excepting those whose parents chose to opt-out.

The bill, sponsored by Rep. Camille Lilly, D-Chicago, has passed the Senate and now awaits a House vote to adopt changes made. We hope this bill becomes this law — as soon as possible.

Recently, Henry-Reid, who also serves on the AFC board, took the time to answer questions about the need for comprehensive sex education for Inside Story. What follows is an edited transcript of that conversation.

Inside Story: From your medical perspective, why is comprehensive sex education needed in the schools?

Henry-Reid: We want our young people to be decisional thinkers. But we have to give them factual information to make sound decisions. If you only give them a slice of the pie, they can only make decisions based on what you’ve given them.

We know young people, especially here in Chicago, are sexually active. I always have thought that abstinence should be the base and should be included in all conversations about sex and sexuality. The core message should be it’s OK not to have sex. And here are some of the benefits of abstinence. But we also need to tell them what can happen if they choose to have sex and here’s how they can protect themselves from STIs.

IS: Why is the abstinence-only curriculum not enough by itself?

HR: Abstinence is not enough because we’re only giving kids one message. It’s not countered with a message that is based on the reality of many of our young people who are already sexually active or seriously contemplating becoming sexually active. They need comprehensive information to help them make safe and informed decisions.

Abstinence is often paired with a moral judgment. It also has a heterosexual message embedded in it. If you’re a girl, it’s better if you wait until marriage. You’re worth more in the eyes of society. It can become a blame game … you’re worth more if you abstain, you will be coveted if you abstain and, unfortunately, the focus on abstinence is directed at females. And we all know it takes two.

We’re a very hypocritical society. I was having a conversation with a local representative who’s very much against (comprehensive) sex ed. She covers a South Side district with high rates of STDs and teen pregnancy. She said she wants students to stay in school and that should be the focus, not talking to them about how to have sex.  My response was that you represent a constituency with high rates of sexually activity. And no one is teaching them how to have sex. The message is: if you’re having sex, here’s how to have safer sex. If we give them the information, they can and hopefully will make healthier decisions for themselves.

IS: For many of us working in the HIV sector, H.B. 3027 (comprehensive sex ed) seems like a no-brainer. But we’re been trying for years to pass this or some variation of this. Why do you think it’s so difficult/controversial?

HR: There’s always been this idea that if we give them information, we’re giving tacit approval for them to have sex. It isn’t true. … I see the repercussions of this every day. … But you’ve got these two political camps on this issue of sex ed. And it’s hard to find a middle ground.

IS: Do you think comprehensive sex ed could really make that much of an impact?

HR: Yes, I do. And there have been studies done to support that. Sex ed should always carry an abstinence message ... But not an abstinence-only message. When kids are informed, and parent(s)/caregivers are talking to them, they tend to delay their sexual debut and they tend to be more effective condom users.

And we could look at the schools that are doing a good job. … You can mandate comprehensive sex ed, but if you have people tasked with teaching it who aren’t fully embracing it, they can do more harm than good.

IS: Presumably, if comprehensive sex ed were taught in schools, there would still be teen pregnancies and STDs. What responsibility do parents have to teach their children about sex?

HR: I would hope all parents take an active interest in the health of their kids. I can’t tell you how many parents have brought their children to talk to me. They feel reticent or maybe they don’t feel they have the knowledge. Or they don’t want to give that tacit approval.

I’ve had the idea that we should develop cadres of parents to teach other parents. Well-educated parents could make a difference.

It’s all about teachable moments. When “Desperate Housewives” was on, my daughter, who was then in middle school, wanted to watch it. I told her she could only watch if I watched it with her. I was able to say, OK, Gabby is married like you’re father and I are married, but she’s hooking up with the gardener boy. What do you think about that? If parents can have these conversations with their children, it’s a good idea

Having a conversation with your son/daughter about how you feel about the content and what they understand about the content can be very powerful. At the same time, let them know what your values are.  “I realize many young people have sex, but as your parent, my preference would be for you to not have sex until you’re older, more mature, and capable of handling some of the things that may accompany sex like STIs, pregnancy, the person not wanting to be with you anymore, etc.”

My experience has been to try to maintain an open dialogue and know as much as you can about what your kids are doing. And make sure they know what your values are. I do value abstinence. I expressed to my daughter that’s my preference. But I also have expressed to her what can happen if she chooses otherwise and how contraceptives and condoms can help keep her safe.

IS: According to the CDC, Chicago ranks first and second in the nation, respectively, for the highest rates of gonorrhea and chlamydia infections among young people aged 15 to 19 years. That’s staggering. Why is that?

HR: We know these three things. These numbers tell us we have a lot of sexually active teens, they’re not using condoms properly and they’re probably not being screened for asymptomatic infections.

We know it couldn’t happen if the kids weren’t having sex. And we know it wouldn’t be happening if they had all the information. All the little things you might not otherwise know. Like you can’t use baby oil or cocoa butter as lubricants for condoms. Or when you use a condom, you need to leave a little room at the tip. Or you can’t carry a condom around in your wallet for years.

These are things you might not know, if someone didn’t tell you — and most importantly with condoms — didn’t show you how to use them properly.

To read more about Dr. Lisa Henry-Reid's remarkable story and how she came to be involved in adolescent medicine -- click here.