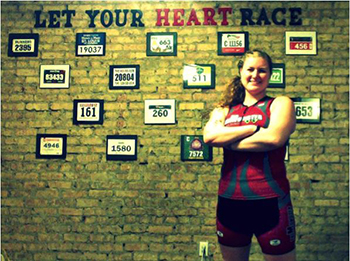 November 2012 marked Meaghan Divane’s 25th birthday, but she wasn’t in the mood to celebrate, having just ended a significant—but unhealthy—relationship a few weeks prior.

Still, she toed the starting line in the Hot Chocolate Chicago 5k race without too much expectation. And then she learned what she wanted to do—what she needed to do—for the next 365 days.

“I looked to my left and then my right during my pre-race routine,” Meaghan recalled, “and next to me was a woman with an above-knee amputation. In that moment, I realized that I have a lot to celebrate: I have my health, I can breathe, I can run, and no one can take that, or the joy of racing, away from me.”

And so it began, her mission to compete in 25 endurance events before her next birthday.

Meaghan’s journey will conclude on October 13, when she laces up her running shoes for the Bank of American Chicago Marathon. She won’t be alone, though. Of course she’ll be surrounded by family and friends—and over one million spectators—but she’ll be running with TEAM TO END AIDS (T2).

Meaghan joined T2 after she started her adventure.

“When I would head to the gym,” Meaghan said, “I would see these crazy athletes decked out in their red singlets and training shirts, and I wanted to be a part of that. I wanted to do more than just race.”

She joined the team, and “T2 has brought some of the most inspiring people into my life.”

Before then, Meaghan wasn’t connected to people living with HIV/AIDS. To her, as with many, HIV affected people outside of the United States, primarily in the developing world.

After joining T2, however, she saw how big of an impact HIV/AIDS has on people in Chicago today, where over 35,000 people are living with the disease, and only half are accessing medications and treatment.

“Everyone I have met through T2 is standing up to fight this disease and the stigma associated with it, hoping that one day AIDS will only be known from stories older generations tell,” she said.

T2 was also a great fit for Meaghan athletically. She considers herself more of a triathlete than a distance runner, and she was able to complete IRONMAN Steelhead 70.3 with her newfound team. What’s more, that was her second IRONMAN 70.3 in as many months.

But the marathon was still calling her.

“When I decided to run 26.2 miles, I knew I couldn't do it alone,” Meaghan said. “That’s where T2 stepped in, again. I have been taught so much on this journey about running but more so about myself.”

Meaghan learned that she’s so much more than numbers. Speed, distance, weight, reps—none of them matter. The people who inspire her most aren’t the first finishers; they’re the ones who never give up, who never give in to adversity.

Those words now describe Meaghan. When she started this year, she focused on hardship, not overcoming it. She changed, though. Racing changed her. People who race and who train and who dedicate their lives to eradicating HIV/AIDS changed her. And now, she’s focused on one last race before she turns 26.

“I couldn't imagine running the Chicago Marathon with anyone other than the teammates I have grown to love these past months of training. I love what we are fighting for. It will be bittersweet to cross the finish line, but I am glad I will be wearing red when I do!”