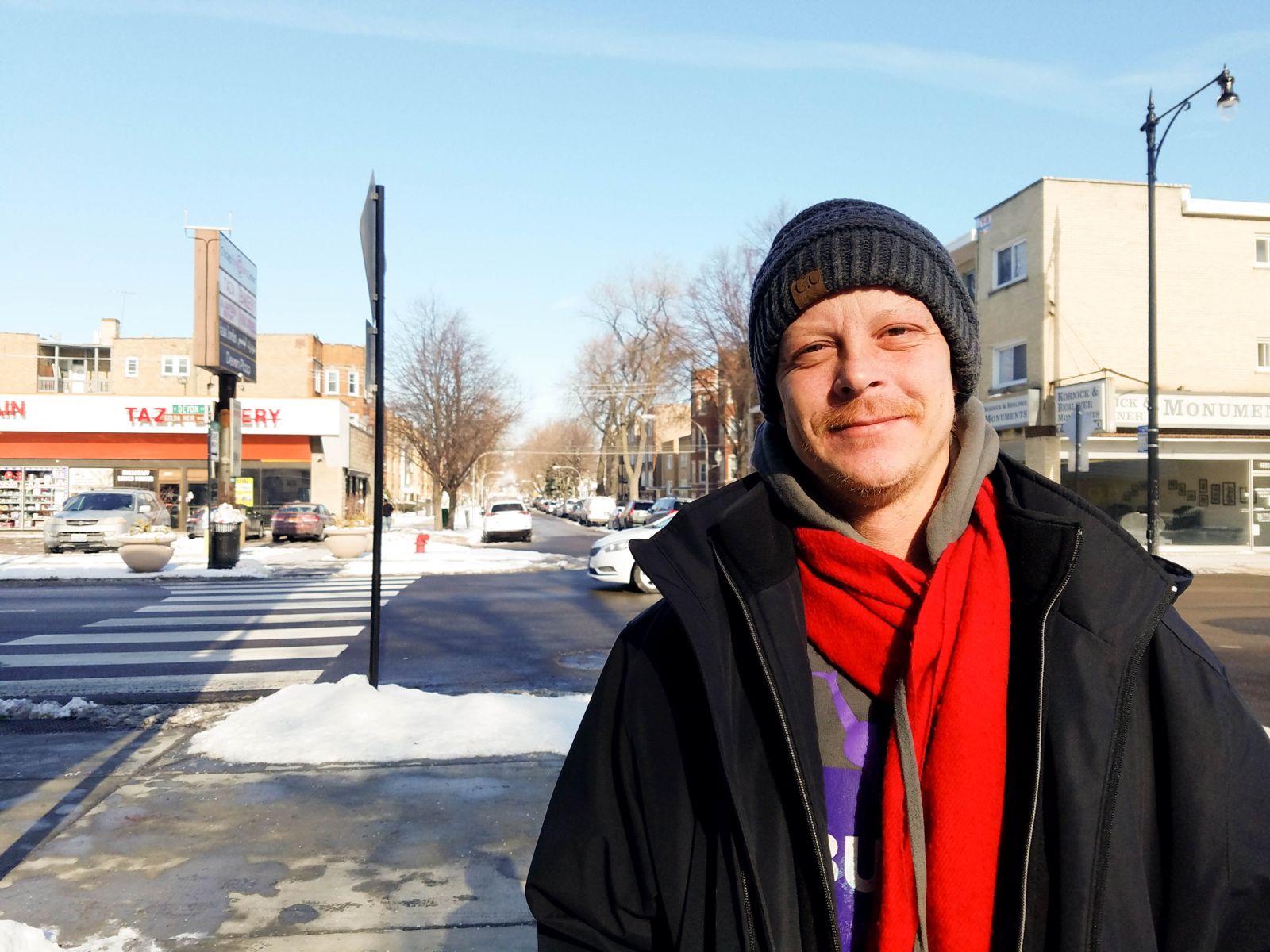 When Rex Gaimari was homeless, he was constantly concerned about his safety. He was in and out of shelters for about 3 years, which was the direct result of losing the home he shared with his mom. Rex had been her caretaker for years, but when she passed away he needed to find a new place to live. He tried several times to move in with extended family, but nothing ever stuck. He found solace at a local shelter in Chicago’s Uptown neighborhood, which also gave him access to numerous social services in the area. However, it took some time for Rex to come to terms with this new way of life.

"The shelters are not a good place to be. Period,” says Rex. "You have to keep an eye on your things and, if you fall asleep, you can wake up with all of your stuff missing, so it's pretty hard."

Thankfully, Rex's openness and care for others allowed him to form bonds with the people he frequently encountered at shelters and on the street. After some time, he became part of a community of people experiencing homelessness who all looked out for one another. Rex and his friends would often hang out near a Mariano's grocery store and keep warm in their café, and it was a good spot to ask other neighborhood residents for temporary assistance, such as spare change or food to eat. However, one day, someone offered them something completely unexpected.

"One of the kind people out there asked, 'Hey, do you need a tent?'" says Rex. "And that's what started it all. There was one person who came by that day who gave everyone a tent."

This sparked the development of the Lawrence Avenue Tent City community under the Lake Shore Drive viaduct. While living outside means dealing with the harsh Chicago weather conditions and the constant car and foot traffic of people passing by, Tent City residents felt like they had slightly more freedom, independence and even more safety in their unconventional homes than they did in the shelters. This residency allowed them to have more control over who was living around them, have a dedicated place to store their belongings and keep an eye out for one another.

"Of course there were problems, but … there was no thievery. People had their own issues, but it was contained," says Rex. "It was more of a community over there ... We were a family."

Starting out with only 12 people, the Lawrence Avenue Tent City grew into a community of approximately 40 residents. Soon after, more people began setting up tents under different viaducts in the neighborhood.

While living in Tent City, Rex frequented the nearby Heartland Alliance Health Center, which serves the health care needs of people experiencing homelessness. Having close access to this clinic allowed him to continue managing his chronic health conditions, such as Attention Deficit Disorder, get connected to a counselor at Thresholds and address other health concerns that came up while living outdoors. Rex was unaware that the clinic was working on a partnership to help Tent City residents gain the dignity of a home.

Thresholds partnered with the city of Chicago and the Center for Housing and Health for a program called Better Health through Housing (BHH), which was developed to identify individuals who are living with a chronic health condition and have experienced homelessness for an extended period. Rex was enrolled in a project for people who were living under the viaducts and would regularly use the Heartland Alliance Health Center. The goal of this project was to link individuals to immediate housing to improve their health outcomes.

When the time came for BHH outreach workers to connect with Tent City residents identified as potential candidates for program, Rex was wary. He had heard from other residents that people from social service agencies had come to survey them and never followed up with help, and rumors emerged that made many skeptical of people offering housing solutions. However, the one group Rex agreed to talk to were with BHH; they were connected to Thresholds, whom he trusted.

"They're the nice people ... they're sincere. They took down our information to get us on the list for housing. They weren't playing a scam," says Rex.

One day, unexpectedly, Rex's case worker from Thresholds stopped by Tent City to bring him to meet with Jamin, his new housing case manager from H.O.W. Jamin consulted with Rex and soon after he moved in to a temporary apartment known as bridge housing. Rex stayed there until finding a permanent apartment and in January 2017, he signed the lease to his first apartment in Rogers Park.

Through a subsidy from HUD, support from H.O.W. and Rex's own income, he is able to afford for his new place. To this day, Rex still meets with Jamin on a regular basis and says that having his own apartment has given him the freedom to manage his own life. Simply having the ability to lock his front door to leave his house knowing his belongings are safe while he takes a walk has helped him tremendously.

"I love my little safe haven. It's just a place to be quiet," says Rex. "I have all kinds of nice people in my neighborhood, so it's actually good therapy to be able to walk around and say 'Have a blessed day!' That's what I do constantly."

In January 2018, Rex re-signed the lease to his apartment and marked his anniversary of officially no longer being homeless. He will soon be starting a job training program with Inspiration Corporation and further pursue his love of cooking. While he still faces challenges in his personal life, Rex is happy to have a warm bed to sleep in at night, access to healthy food and a caring housing case manager who works with him to help meet his goals.