From the Sports Desk: Chasing an End to AIDS 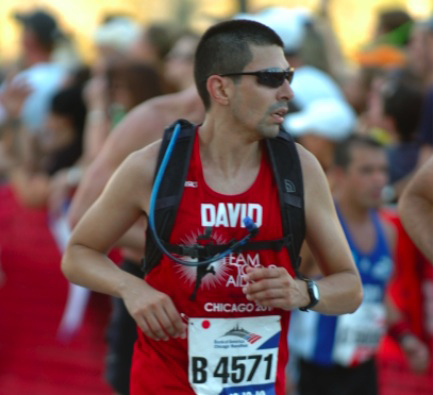 Living with HIV is sometimes described as a rollercoaster but for me it’s more like a marathon or several of them.

Running has been my constant companion, even before my HIV diagnosis in 1994.  Back then, my typical run was shorter – my impatience greater.  My exercise routines mimicked the circumstances of my life.  Desperate to seize every fleeting moment, I favored short sprints over long, meandering runs.  My attention raced to make the most of a young, abbreviated life.

It’s hard to remember what it was like to run – or even live – without HIV.  What differences did HIV make in my athletic abilities, injuries or recoveries: I shall never know. But the changes brought on by antiretroviral therapy were dramatic.

For years I feared the drugs and delayed therapy as long as I could.  To swallow a lifetime, daily reminder of HIV seemed, back then, too much to bear.  And I expected disappointments, scarring side effects, drug resistance.  In 1996, scientists lauded multi-drug combination therapy as a major breakthrough, but I remained doubtful.  I braced for more bad news; I had been let down before.

By 2004, facing a depleted immune system and sapped energy, I relented.  Despite some initial side effects, I adjusted well to therapy.  My viral load immediately declined to undetectable (i.e., maximum viral suppression) and my immune-system counts reversed their downward spiral.

But most remarkably, I became healthier, stronger, more alert, more alive.  Before therapy, catching a cold was a monthly occurrence.  And colds readily progressed to fever-filled bronchitis or worse.

Before therapy, getting into a pool meant a sinus infection would surely follow.  And running in intrepid weather, rain or cool temperatures was completely out of the question.

With therapy, my world changed.  I reached age 35 and kept going.  I ran my first of many marathons.  I rediscovered running amid the leaves of fall and in the deep freezes of winter.  Not only did I conquer the pool, I trained for a triathlon in Lake Michigan!

Today, I face the challenges of most 42-year-old marathoners.  Less flexible, less resilient.  I sweat excessively and therefore cramp readily.  My recoveries take more intentionality than before.  But in truth, I’m in the best shape of my life and running faster than ever.  I’m faster than most people in my training group.  I’m faster than teammates in their 20s.

On the marathon course, I’m chasing a new personal record (3:42 is the time to beat!).  And in work and life, I’m chasing new horizons I never thought possible: an end to the HIV/AIDS epidemic for everyone who is or will ever be affected.

I’ll ponder these thoughts as I attend the 19th International AIDS Conference this week in Washington, DC, where hope to end this global scourge is dawning.

Conquering AIDS is now not unlike conquering a marathon – it’s a long road, no doubt, but with dedication, perseverance and sheer muscle (the political and fiscal kind) it’s imminently doable.

President/CEO of the AIDS Foundation of Chicago (AFC), Munar is training with the Team to End AIDS (www.team2endaids.com) program to fundraise for AFC by completing his 11th and 12th marathons. Make a pledge at www.t2ea.com/demunar. Read more coverage from the conference at www.aidschicago.org/aids2012.