From Transgender Life, a Passion for Social Justice is Born 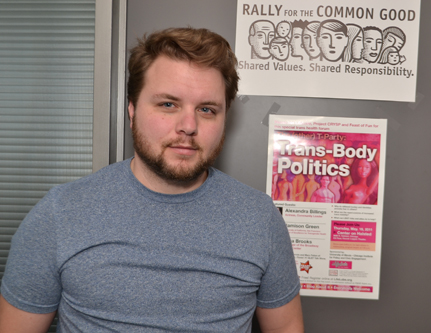 Born a girl, Pete Subkoviak began telling his parents he was a boy at age 3.

“In general, I would say I was a really happy kid except for the whole wrong body thing,” Subkoviak quipped in a recent interview.

At 17, he finally found the word to describe himself. He wasn’t gay or lesbian. He was transgender.

Now, at age 30, Subkoviak’s life has come full circle. He entered the field of HIV/AIDS work as a young man interested in politics and helping the marginalized and downtrodden — not because he’s transgender. But the more he learned about transgender people, particularly transgender women, being disproportionately affected by HIV, the more motivated he was to do something about it.

“He really spearheaded this entire project,” Perloff said. “He’s been one of the key visionaries.”

TransWorks will help meet the unique needs of the transgender population, Perloff said, such as how to manage resume gaps from times of transition, addressing paperwork confusion from before or after transitions, and even training employers to be more aware of transgender identity.

So, what does employment have to do with HIV?

“One of the big issues is the lack of employment opportunities, the lack of people willing to hire transgender people,” said Subkoviak, policy coordinator for the AIDS Foundation of Chicago (AFC). “And of course, HIV manifests itself through the survival sex that many of these transgender women do to survive.”

Housing is key, too. Chicago House is also planning on opening a new home for seven to nine transgender people in 2013. Those living there will also be connected to job training, health care, case management and other services. About half of the residents will be HIV-positive, Perloff said.

“Chicago House has been absolutely awesome,” Subkoviak said. “They have the expertise and they’re fully committed to it.”

Subkoviak helped devise the program, Perloff said.  He also brought the right people to the table, from state officials to members of the transgender community.

“He’s helped us broker the some really important relationships,” she said.

A Transition to Self

If Subkoviak was born in the wrong body, he was at least born to the right family.

A native of Madison, Wisc., Subkoviak points to his family as a supportive and steadying influence throughout his conflicted school years.

“They weren’t trying to change me into a different person,” he said.

The youngest of four siblings, Subkoviak was a natural athlete and — as a sort of protective shell — a class clown. He thought like a boy, talked like a boy, acted like a boy.

“I just was very much the person I am today,” he said.

The concept of transgender identity was relatively unknown, and widely misunderstood, in the early 1980s, even in the liberal town of Madison. His parents took him to therapists who advised them to encourage female behavior in their daughter.

“In the early 80s, there were questions about whether you could guide someone and change their identity,” he said. “They were tentative but sort of went along with what doctors and therapists had suggested.” 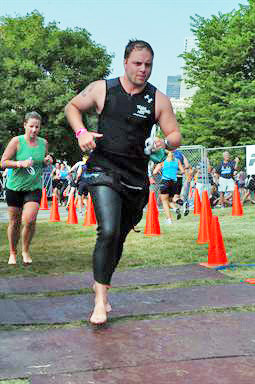 It didn’t work. Though Subkoviak’s friends and family naturally related to him as a boy, calling him “Subbie,” the reality of being trapped in the wrong body took its toll. He battled depression and suicidal thoughts from age 10 to 19, he said.

“I went through waves of depression and dealing with the whole dissonance of the body/mind conflict,” Subkoviak said. “It sucked not being able to be a normal kid.”

The word “transgender” was known only to him in the context of the circus-like atmosphere of the Jerry Springer Show, where individuals posing as transgender deviants were exploited a sort of circus act for mainstream America.

But his father dug a little deeper.

“He was the one who asked the question — ‘Do you think you’re really a boy?’ ” Subkoviak said.

A professor of statistical analysis at the University of Wisconsin-Madison, Mike Subkoviak researched and came to a more thorough understanding of gender identity. Thanks to the Internet, he discovered that most transgender people were high-functioning, well-adjusted transgender people, not the stereotypes so prevalent in pop culture.

(Mike and Mary Subkoviak, who are devout Catholics, would later launch a LGBT group along with others at their church.)

At age 17, Subkoviak began coming out as transgender to his family and friends. A year later, he began his full transition. His grades in college showed marked improvement as he gained a solid footing in his new life. The depression sloughed off through the years.

“There was a happiness, a comfort, a confidence that was completely devoid before,” he said.

Subkoviak’s work at AFC extends far beyond transgender issues. Every year, hundreds of HIV advocates storm the state Capitol each year, eager to bend the ears of their legislators on HIV policy issues and looming budget cuts.

And for the past four years, Subkoviak has led them, wearing a bright red shirt that reads “HIV-Positive” (a symbolic show of solidarity as part of the Anti-Stigma T-shirt Campaign).

In 2007, he began working in the HIV/AIDS field at the AIDS Legal Council of Chicago, where he did marketing and outreach work. The experience opened his eyes to the challenges that beset many people living with HIV: the stifling stigma, the exorbitantly-priced medications, the struggle to access services in high-demand.

“It’s not stuff you really read in the news, the social implications of having a medical problem,” he said.

In 2008, Subkoviak began work at AFC.  As policy coordinator, he has trained advocates and organizations around the state on the issues important to those living with HIV and how to make their voices heard.

“It really turned out to be like a family,” Subkoviak said. “I don’t know what I expected, but I didn’t expect that.” 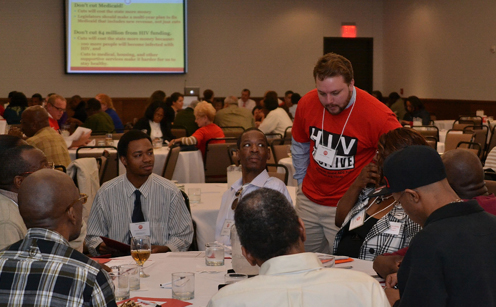 Subkoviak advises a group of advocates at Lobby Day 2012.

Arick Buckles, a member of IL ASAP, said he was fairly quiet about his HIV-positive status when he met Subkoviak just four years ago. Anyone who saw Buckles speak at Lobby Day last month, so full of passion and confidence, might find that hard to believe.

“It was Pete who helped me find that voice,” said Buckles, a housing and prevention specialist at Chicago House. “His passion rubbed off on me.”

“Pete has been instrumental in helping people living with HIV transition into being advocates for their communities,” Peller said. “It’s an incredible gift for someone struggling with poverty, struggling with a medical condition, to have an environment where they feel supported in coming out as HIV-positive.”

Subkoviak is leaving AFC for graduate studies in public health at Johns Hopkins University. His last day will be June 1. His advocacy focus likely will broaden to the structural problems that plague the healthcare system. But he’s not leaving HIV/AIDS work, or transgender issues, behind.

“This is going to be part of my life in some capacity no matter what I’m doing,” he said, “because this is something that I care about.”