His Lifelong Journey to Being Poz and Proud 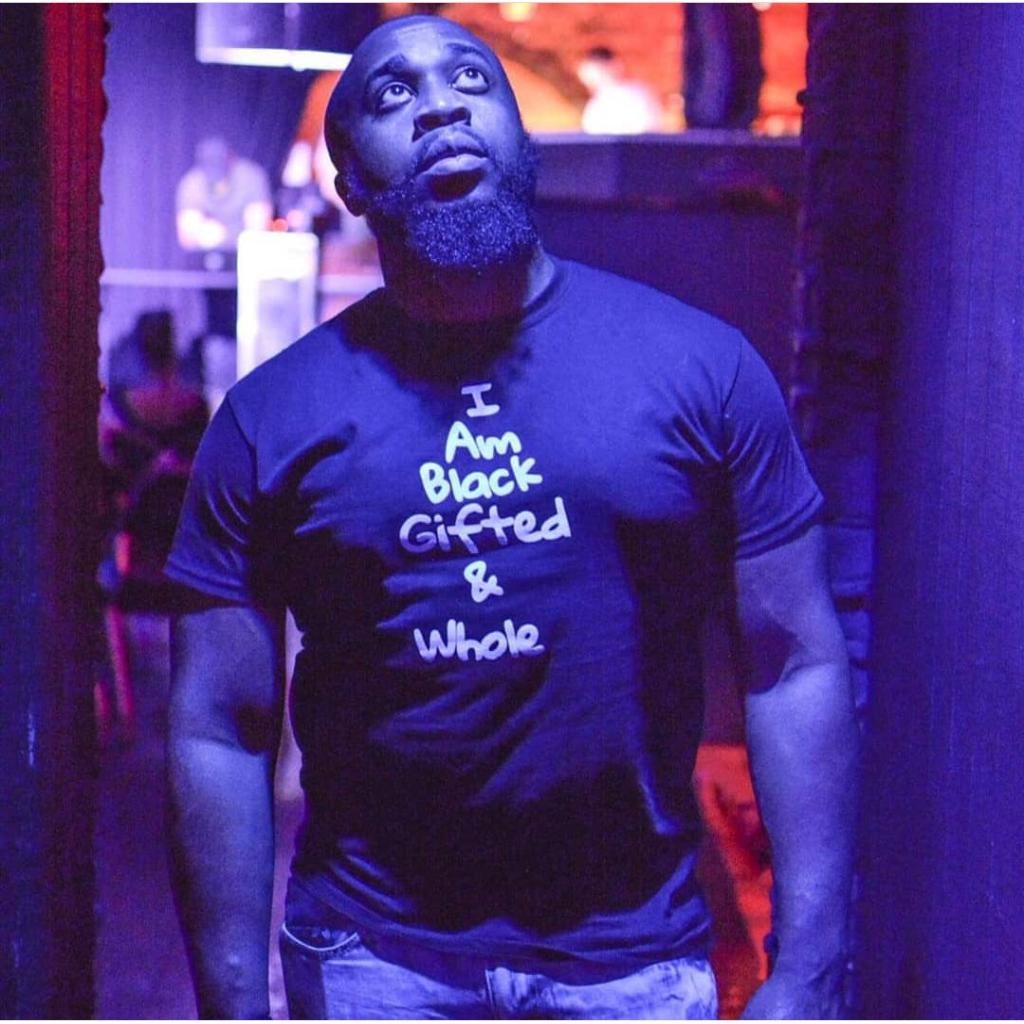 My name is Rae Colyer, and I am the youngest of twelve. Out of all my siblings, I happen to be closest with Marlin Jr., my eldest brother (he’s got fifteen and half years on me)! Both of us identify as queer individuals; me as a genderqueer pansexual, he as a gay man. If it were not for his guidance, and his own trials and tribulations coming out, I have no idea where I’d be on my own journey to self-love and acceptance. He paved the way with my parents, and taught me a lot as we grew together. He was (is) like a third parent, and I admire him dearly. I wanted to share his story with the world, in hope that others will learn even a fraction as much as I have. So, here is my brother, revealed to you:

Marlin Jr. knew he was gay from a young age; so did my father and his mother (we have different mothers). In the beginning, my father was angry and aggressive, threatening corporal punishment if he heard about his namesake “doing that gay shit again.” Dissimilarly, his mother, Sherri, told him that if he no matter what, she would always love him and wouldn’t be upset – he just had to tell her the truth. Things changed drastically when he actually did come out after a magnificent night on the town with the first guy to ever lavish attention on him.

See, Marlin Jr. took advantage of every-other-Friday half-days at school, and he agreed to a date on a live chat hotline from the late nineties. They went to dinner, the movies, and walked around downtown Chicago holding hands and kissing as if they were living in a cheesy rom-com. Junior didn’t get home until after 9pm – you can imagine how angry Sherri was. The next day my brother wrote her a letter and gave it to her as she walked out the door; in it, Marlin came out and told her exactly where he had been.

It was not taken well, to put it nicely.

His mom took him to get exorcised at a church, put him in religiously affiliated therapy, tried to have our grandmother talk him out of being gay, and eventually sent him to live with our father, expecting him to “toughen him up.” In a car ride, Marlin Jr. told our dad he was gay, expecting all hell to break loose – but Daddy only said “…and?” The rest is history: their relationship developed into the close bond they have today, our dad met my mother, who changed his life for the better. You see, my dad’s acceptance was largely influenced by my mom, whom he’d asked for help to overcome his homophobia because he knew his son would be coming out soon. Our dad made the conscious decision to open his mind and heart so that he could limit the pain he knew he’d bring his eldest.

To Marlin, coming out seemed like the hardest thing he would have to do in his life — that is, until he learned he was HIV-positive in 2003. There’s a story to how he found out: My brother ended up in a rather domestic relationship with a man he met online. They lived together, but his partner worked overseas – and made good money – so my brother held down the fort at their apartment in Chicago. His partner had gotten him an interview in Texas for the same overseas position. It was a position that required you to be HIV-negative for deployment. So, my brother got tested, but had to do a retest because his blood “clotted” – something he doesn’t believe. The third day of his training, Marlin and two other people were taken to a clinic, where he was told he was living with HIV.

Marlin told me the moment felt surreal. My brother was born in 1982, just as the AIDS epidemic had begun, and so was too young to understand or be educated about the epidemic and how it would affect him when he got older. As a result of poor sex education, he barely knew anything about HIV/AIDS and what he did know was limited and shaky. When diagnosed, he was devastated because it felt like a death sentence. He called a few people who reassured him. He also called his boyfriend, who freaked out on him. Regardless of the mixed reactions to his status, Marlin felt as though if he was meant not to survive; if he was meant to drop dead in that moment, he would have. But since he was still alive and kicking, he knew there was purpose in his life he had not yet found. Bucking himself up, he went back to Chicago where he started his journey as someone who is poz. His boyfriend did not make it easy: he was pissed and upset, resulting in my brother getting kicked out of the apartment. It was a good move; the relationship was toxic, and you're about to learn how.

Not much later the boyfriend committed one of the worst betrayals.

He got drunk at a club and told everyone who would listen that Marlin was poz. This moment changed my brother’s life forever: being outed as poz made him feel shame, fear, isolation, and as if no one would ever love him again. He’d felt as though his opportunity and freedom of choice to come out for a second time (as poz) had been stripped from him. For years because of the trauma, Marlin didn’t talk about being HIV-positive, and never told more than close friends and family about his status.

That changed in 2014 when he finally began to get to know and speak regularly to his current boyfriend, Tim – the two had followed each other on Tumblr for three years by that point. When my brother was first introduced to his boyfriend’s blog on Tumblr, he had come to admire him and envy his strength. Tim was beautiful, was already involved in the work of activism, and openly spoke about his HIV-positive status. They had begun a long-distance relationship that August, and by January, they had met, spent two holidays together, and made things official. This is when my brother’s life truly began to form into the life he lives now.

Before being open about being poz, Marlin had helped friends and acquaintances come to terms with their status, but he had not been able to do the same with his own. Watching Tim be unafraid and open about his status, and speaking about being poz publicly, inspired my brother. Before they became the extraordinary couple they are now, Marlin would look at Tim’s work and impact and think, “I wish I had an ounce of your strength.” My brother said this about what he’s learned from his boyfriend: “Tim has taught me a lot about being unafraid to live in my truth – essentially my status was the only thing I was not living out loud about … it was haunting me. As time progressed, I found myself being more honest about it.”

That honesty found a new level last year when Marlin posted his poz coming out video. He had no idea what an impact it would have on other people! He made the video for himself, as proof of his strength, and a test of his comfort in being poz. However, there were lots of people who appreciated his story and got a lot from it. Even people from high school came out of the woodwork to share their stories and congratulate Marlin for his openness.

His coming out as HIV-positive helped old friends and classmates, and peers with mutual connections, feel comfortable in their status and confident in staring a conversation about HIV and sexual health. This seems to be a continued theme in his life. Marlin’s career is centered on helping people living with HIV and AIDS. He is a patient navigator (someone who helps patients in the journey through their health care) for those living with HIV at Mount Sinai Beth Israel hospital in New York City. His position requires him to focus on his patients’ adherence to their antiretroviral therapy (ART) medications as well as their primary care physician’s appointment reminders, home visits, health promotions, etc. It is an emotionally taxing job, as many of his clients are living with two or more chronic illnesses or conditions simultaneously, and battle with substance use and/or mental health issues. But, as hard as it can be emotionally, he finds it more than worth it.

Tim does similar work. Their lives, their activism, and their senses of duty, are tightly entwined. Marlin has been an activist and advocate for a long while, having worked in Detroit at a nonprofit named Kick, an agency for LGBTQ African Americans. However, his advocacy rarely involved HIV. That part of it came when he and Tim began to date seriously.

However, remember that their HIV/AIDS advocacy is only one part of their relationship. They are filled with laughs, joy, and good times – though the realization of no longer being 25 is starting to hit. My brother described their love as “honest, loyal, silly, tender, and strong.” He also explained that his favorite thing about them is that they are absolute nutcases together, claiming that “there’s something about being with a partner with whom you can just be yourself.”

Seeing my brother so free, content, and in love, fills my heart with joy. I owe parts of it to Tim – whom I consider a brother in his own right – but it was Marlin’s choice to open himself up to the world, to find self-love, and to live in his full truth. That growth is what I’m proud of. My brother is a survivor, he is a guider, and he is fighter. I admire his strength and aim to have even a sliver of his confidence and strength. This family is filled with warriors, and I’m proud to say I’ve been following in the footsteps of my brother’s leadership.